Born in Sweden in 1980, Ingberg is a computer engineer and a self-taught photographer who uses the medium in a highly personal and self-referential fashion. Although he started out making single images, he eventually transitioned into expressive photo montages distinguished by enigmatic yet relatable tableaux, a sharp sense of drama and a sly sense of humor. Despite his influences, his is a distinctly original vision, one that is elegant and allusive and which faithfully evokes the Surrealist objective to “resolve the previously contradictory conditions of dream and reality.”

Can you describe the kind of photography you did prior to the montages?
I started doing photography somewhat seriously when was about 15. Since then I have tried portraits, concert photography, street photography, nature photography and everything in between. Despite being all over the place in terms of genres I have always gravitated more towards art photography than documentary photography. I have never seen photography as a way of objectively describing reality, but rather as a way of telling stories and sharing my views. Looking back at my old pictures I can see that my current visual language has always been there, and in many ways the pure photography I did before resembles my photo montages in terms of motifs, composition and “feel.” They were often simple, minimalistic compositions with a single subject and lots of space. But since I had to rely on the scene in front of the camera I could not really tell the stories I wanted; I always felt something was missing. It was when I first started doing photo montages, creating my own scenes and reality, that I could further refine my work.

Your website references the “personal abyss” you underwent in your late twenties. Was that in a creative sense?
No. I was struggling emotionally and in all parts of life, and had been for a long while without acknowledging it until I was in really bad shape. My creativity, however, was a crucial part of getting back on track. Like everything else in my life, I had not been in control of my creative work. I didn’t have the confidence to find my own path, and mainly tried to do what I felt others would appreciate. Out of need, as a sort of therapy to vent my feelings, I started creating these photo montages dealing with my inner life. I did these only for me without caring what others would think of them, and in that process found my own artistic expression.

You didn’t consciously choose Surrealism as a vehicle of personal expression, it just evolved organically for you. What does that say about the way you approach things?
I’m very good at making plans and working purposefully and disciplined, but many things in life are impossible or at least very hard to plan long-term, and you have to just follow your intuition. I had a strong sense that it was photography I wanted to do, but never really planned in what direction I was heading with it. That search was very much driven by intuition and feelings rather than rational decisions and planning. I still feel that I have just begun my journey as an artist and right now this is where I am, doing this kind of work. What the next destination on the journey is I have no idea, but I trust that I’ll know when I get there.

Jerry Uelsmann is probably the most famous exemplar of constructed, surreal imagery. I’m wondering what you think of his work and if it speaks to you on any level—aesthetic, technical, thematic?
I am a big fan of Jerry Uelsmann’s work, even though I have not studied it in great detail. I love every aspect of it, from the aesthetic to the fantastic craftsmanship.

It’s interesting that Uelsmann is now doing the same kind of imagery digitally instead of through analog means. Turning that around, could you conceive of making your images in the darkroom?
I started out with analog photography and have done a bit of darkroom work, although at the time I did not have the patience for it and it often turned out a bit sloppy. I absolutely entertain the idea of doing analog montage work, and have analog equipment I plan on using, but haven’t got around to yet. In many ways I think my workflow would translate well to an analog process. I try to do as much work as I can in camera. Well-planned and photographed source pictures are a much better option than doing excessive work in Photoshop. In my opinion camera work will always have better quality and look better than something “fixed” in post-processing. I use only simple techniques in Photoshop to put together the final picture, and most of them have a physical equivalent in the darkroom. A completely analog work process would be very interesting and challenging, and I hope I can do that somewhere along the road.

Even though you’re working digitally, there’s an organic look to your images. How do you create analog-like visual textures?
Working with light and textures is an important part of the look and feel I’m trying to achieve, as this complements my minimalistic compositions. A lot of it is due to the motifs I choose, but I also strive for a soft light that lets me capture a wide dynamic range, and in post-processing I work a lot with dodging and burning and other techniques to create added depth and further enhance light and texture.

Your imagery is notable for its relative simplicity, with uncluttered yet striking compositions. Have you always had this minimalist vision?
I’ve always been drawn to simplicity, or minimalism, even in the single-imagery work I did before (and still do). It’s an aesthetic that speaks to me and suits my way of working with images and ideas. I have been, and am still doing, denser, more complex work, but mostly as a creative exercise for fun. It’s a very different way of working and takes a different approach—it’s great practice and I learn a lot from it.

Do you believe less is always more?
I don’t think that less is always more generally, but trying to find a simple yet ambiguous visual representation of something often very complex is a key concept. It’s one of the most interesting and fun challenges in creating this kind of work.

I see a lot of visual homages to other artists in your work: Magritte, Uelsmann, Melvin Sokolsky. It’s similar to how the French New Wave directors of the 1960s packed their films with references to various artists. Is it fair to say this is a kind of game you’re playing with the viewer?
Sometimes it is a little game, sometimes it’s an homage, sometimes it’s me borrowing and testing techniques and visual aspects to learn and develop and sometimes it is, to be honest, completely unintentional.

Talk a little about your new series, Solitaire, how it differs from and how it relates to Reality Rearranged.
Reality Rearranged was the first series I did using my own inner life as seeds to my work and trying to explain something abstract like a feeling or a thought through a picture. After three years of working on the series I felt that I was far away from where I started technically, conceptually and stylistically. It was time to finish the series, but I was not quite ready to move on to something completely different. In that sense Solitaire is a continuation of Reality Rearranged. The main theme is still the same and I’m trying to explore the same concepts. With Solitaire I’m building on what I’ve learned from Reality Rearranged, developing and refining it further in smaller increments. I don’t know if Solitaire will be the last series of this particular kind of work and if I’ll move on to something completely different, but I’m in no rush and feel that I have a lot more to explore with these pictures.

There is definitely a playful feeling to these images; they invite the viewer to explore multiple thematic and/or emotional directions of their own—and to have fun while doing so. Do you see your work in this light?
Good storytelling, visual, written or otherwise, should hold a level of ambiguity; it should let you draw your own conclusions from your own perspective. I try to be playful and make my stories ambiguous. Although I always have a concrete idea behind my pictures, with time my perspectives change and my original stories fade away and become replaced with new interpretations. I avoid sharing my own intentions and interpretations since I think that art should be about what the viewer sees in a picture in this moment and mindset, and I don’t want to spoil that. I always love hearing different interpretations of my pictures. It’s interesting how we all think differently, but still in some way alike.

A lot of thought obviously goes into the work, but there’s always a strong emotional undercurrent as well. What’s more important to you—the idea or the emotion?
For me creating pictures has always been something emotional, a kind of outlet, and I have never really been drawn to purely intellectual work. This is how I feel about art in general as well. I am most drawn to work that makes me feel something, be it music, movies, photography or anything else. Even though the emotion is always in the core of my pictures the idea, or intellectual part of my work is also very important. I need to have a strong visual idea acting as a framework to be able to communicate the emotional part clearly and with some distance and humor.

If I had to describe your work in a single phrase, I might refer to it as The Unbearable Lightness of Being, after the Milan Kundera novel. Does that seem apropos?
I think the concepts and thoughts born in self-reflection are universal for all of us—we all carry the same set of feelings inside us and we all in our own way search for answers, trying to make sense of life, the world and being. In the same way all work exploring this will cover the same concepts, and I think that the philosophical underpinnings of The Unbearable Lightness of Being are at the core of these concepts.

Can you see yourself doing single-imagery work at some point? Or do you think you will always stick with constructed images?
For me photography is almost magical and I still get that childish excitement from it that I did when first starting out. It’s so simple; just press the button, and yet so very complex; the camera enables unlimited ways of creative expression and photography is such a vast and diversified form of art. Right now I’m doing single-imagery work purely as a hobby because I love doing it, but I can definitely see myself doing it more seriously at some point if that’s where my creative development takes me. I can’t see that I’ll ever stop photographing and I think the camera will somehow always be at the center of my creative work. 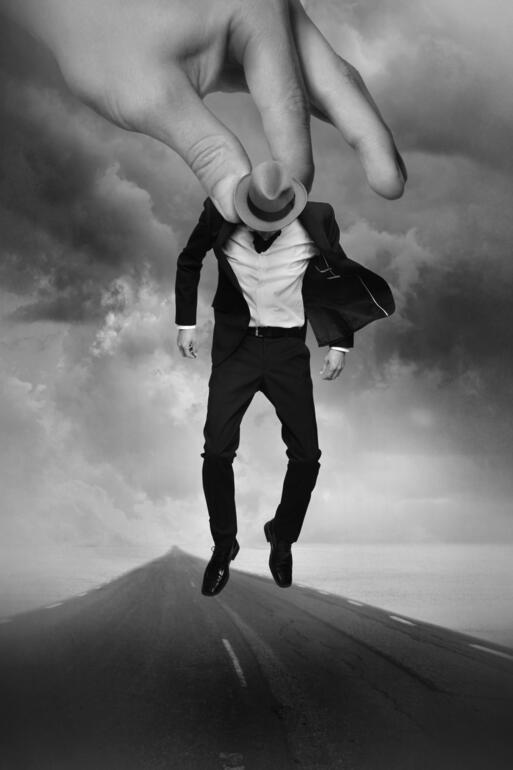