The world is rife with self-portraits. One need only pick a random selection of images off the pages of Facebook, Instagram or Tumblr to see what I mean. It was a scant 10 or so years ago when holding a camera at arm’s length to take an impromptu snapshot of our beaming face was a clumsy and mostly unrewarding task. But with the deluge of smart phones equipped with ever-evolving cameras, the overabundance of these throwaway images has left art-based photographers in a predicament. How does one still use the genre of the self-portrait as a legitimate form of self, and not selfie, expression? The answer is—not all is lost. For reassurance, one need only look at the work of Tatsuro Nishimura.

Primarily an award-winning commercial photographer specializing in food, cosmetics and fashion accessories, Nishimura decided to turn his attention to a personal body of work.

“For many long years, I’ve been using photography to show how I see the world. So I thought the opposite would be possible: letting photography see who I am. That was the concept of this self-portrait project.”

Although the series was done using analog photography, processing and printing (these images were shot with a 4×5 camera), Nishimura’s approach harkens back to his digital commercial work. One can see in these a mastery of space, beautiful use of lighting and a propensity for the mysterious.

It may be a combination of his Japanese heritage mixed together with his move to the New York/New Jersey area that flavors his unique vision. Nishimura’s commercial images are lush and bejeweled with a deep and rich saturation of bright, intense colors. His self-portraits are, however, a more studied and introspective collection of long-tonal-range, black-and-white photographs.

While Nishimura admits to being influenced by Richard Avedon, Irving Penn and Robert Mapplethorpe, one can also see some similarities to the work of his fellow countrymen—the dissected, dissociated point of view of Daido Moriyama; the close-cropped human forms in Eikoh Hosoe’s poetic book Man and Woman; or the intense and confrontational portraits of the denizens of New York portrayed in Ken Ohara’s book, One.

In his first foray into the series, “Self-Portrait #1, New York City, New York,” we are confronted with his intense, side-view gaze bespattered with water. The droplets seem to reside on the surface of the image, a reminder of the blood, sweat and tears that photographers must go through in the darkroom to produce a worthy print. Indeed, the making of his seemingly straightforward self-portraits are complex in their use of multiple methods.

“They are done on film,” Nishimura says. “I first photographed myself on Tri-X film and processed it, hung it with a thread and photographed it on Tri-X again. The image became positive, and then it was duplicated using litho film to make a negative. Finally, I printed it on paper.”

Asked about the suspension of his photographed body parts using only thread, he says, “In my opinion, photographers who do self-portraits are holding something in their mind. I don’t think a happy-go-lucky photographer wants to do a self-portrait. I was somewhat lost and was at a very complicated time in my life at that point. Suspending the film with a very thin thread was the reflection of my mental struggles.”

The images do speak to the tenuous nature of a man in a new world, hanging in space between his homeland and his newly adopted city.

By focusing on his eyes, nose, ears, mouth and hands, Nishimura is “reflecting my five senses…showing what I had seen, tasted, heard and smelled—those five senses create my individuality.” Through the input interpreted by our sense of sight, provided by Nishimura’s photography, we come to understand that that there is still much to consider about the human condition. And that, as his consummate craftsmanship demonstrates, self-portraits, as a serious subject, are alive and well.
— Larry Lytle 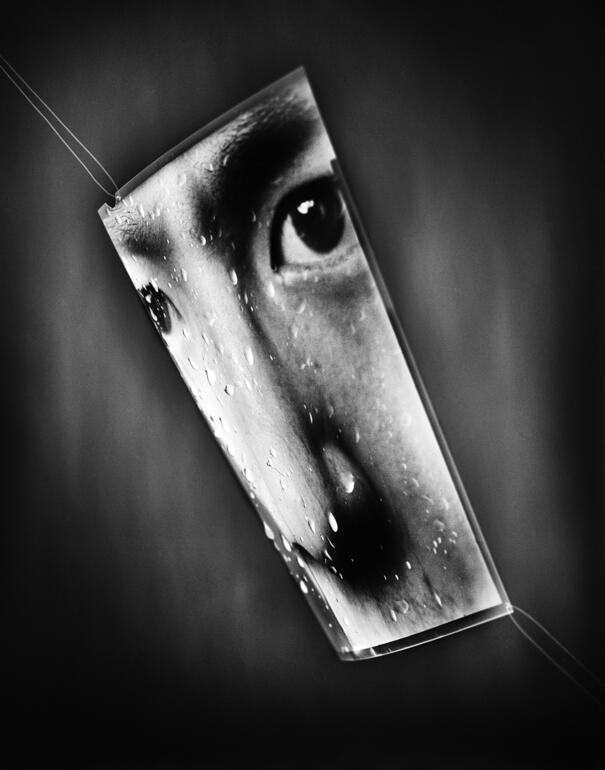