One element contributing to a heightened sense of pending change is the recent opening of trade between the United States and Cuba. What effect will this normalization have on a place that, under the leadership of Fidel Castro, lurked like a Russian warship aiming nuclear weapons at the Florida Keys from 90 miles away?

“What is unique about Havana,” Bank stated about her past visits, “is that as a U.S. citizen, I am not permitted to go there unless I have a license issued by the U.S. Treasury, nor am I permitted to spend money there.” This suggests an outlaw panache (accompanied by monetary legerdemain) that for decades has drawn artists, bohemians and sundry members of the demimonde to Cuba like iron filings to a magnet. Now, Cuba verges on becoming another tourist destination, likely to start resembling other places instead of remaining the unique, idiosyncratic place it was. Think Times Square, or New Orleans, dicey places sanitized and rendered safe. Bank says, “Race to Cuba before it changes!”

Cuban cities will undergo more precipitous transformation than the surrounding countryside. Havana is the island’s largest metropolis, larger than second-place Santiago de Cuba by a factor of five. The 2.2 million habaneros (residents of Havana) constitute a collective that outnumbers the populations of the next nine-largest cities put together.

Havana, in other words, is the big urban fish on an island shaped like a crocodile, an 800-pound gorilla that can’t be ignored. And, to be sure, photographers haven’t ignored it. Thousands of photographs of old cars and weathered faces and walls, and numerous books made from those photographs, assert that Havana has been anything but ignored.

Photographers must maneuver carefully to avoid stumbling over visual clichés and conceptual potholes other photographers have left there. (Bank has noted that workshops and photographers have begun to explore outside of Havana, since the city has been hit by a “tsunami” of shutterbugs.) Bank discovered her path lying at right angles to those worn in by others.

In her earliest visits to Cuba she sought the traces of another photographer’s iconic image. “I came,” Bank writes in her 2016 monograph Piercing the Darkness, “looking for Walker Evans’ photograph of the tall black dandy wearing a white linen suit and straw hat—caught in front of a magazine stand—gazing out at time.” Now, as she says about the super-saturation of photography in the capital, “How many pictures can you take of habaneros standing in doorways?”

Bank’s work proves that Havana is not Cuba’s only image-worthy aspect. During numerous visits since 1999, Havana was an “interlude,” a transitional space she briefly lingered in before continuing her voyage into el campo, the country outside of the big city. Despite obvious differences between city and country, however, Bank insists that she did not set out to create two distinct sets of images. Her view of Cuba is unifying, not simplifying or pigeonholing. Had she not had a strong interest in the making of photography books there would likely have been a single volume.

What she realized about the images edited for and published in her two books (Piercing the Darkness and Cuba: Campo Adentro (2008) is that in both cases her photography, as she puts it, “embraces universal themes of humanity which touch all of us.” She saw that these themes are present throughout the Cuba she experienced. There’s the work, the details of life and the waiting. In the midst of an environment of anticipation and imminence, in places where materialism is only a daydream, connections between people are the most valued currency. Bank’s photography concerns itself with embraces that are physical and psychological, visual and symbolic. Embraces abound in her photographs. People talking, touching, enjoying each other’s company. Cubans embracing the daily business of being Cubans, simultaneously helping us all grasp a more vibrant, complex “Cuba” beyond and within stilled stereotypes.

Bank states that “I did not approach the work from a political point of view, nor pass judgment on poverty.” Instead, she aspired “to get inside the skin of the real players.” Patience is evident in her work. Her eyes alight upon the less decisive moment after the cliché, familiar moment. “Initially, like many first-timers, I was suckered into what felt exotic, yet I consciously made a choice to discard the known stereotypical images, waiting and searching for what I had not seen before. I work spontaneously…. I retraced my steps over and over again, waiting for the invisible. I learned quickly to be flexible in Havana…the unpredictable is what is predictable.”

These photographs also demonstrate a visual edginess and elements of the surreal, whether in Havana or el campo. One Havana photograph (not the only one, but an effective one) evokes the edginess. In it a woman and a dog are perched on a stoop—yes, a habanero in a doorway, but wait. We see the two in profile as they regard something beyond the frame’s left side. Bank, and by extension the viewers of her photograph, sit, or kneel—as Bank must have, given the low angle—on the very narrow strip of sidewalk with the impromptu couple. The woman smokes. The dog, seen entirely in silhouette and projected shadow, is pert, canine-alert, all curves and attention.

The scene begs description as morning; Bank admits that in order to avoid the day’s hottest hours she liked to work from sunrise to about 10 a.m., “after which the unobstructed light became too strong.” Here, the light approaches at a low angle and draws an exquisite portrait of this figure in profile. Her forehead and the bridge of her nose are delineated and join the frieze of facades called out by this crossing light. This would be a great image to see in print, in a real, silver-gelatin print, as there are lovely details apparent in the woman’s shadowed half. (It should be amply apparent in her photographs that Bank shoots with a Leica. Technically and spiritually this is quintessential rangefinder photography.)

Accompanying and enhancing her visual skill, Bank brings powerful written eloquence to her work. As a parallel to the above-articulated image, consider this: “I wait in shifty shadows for the invisible, where the real slips seamlessly into the surreal, where the mask of a smile is always for sale, and Cubans have nothing to give but their soul in a cup of coffee.” And this, more generally descriptive of habaneros, who “live in a twilight zone of anxiety and impotence. Humor is their homegrown anesthetic—music, rum and sex soothe their restlessness. They wait in an eternal limbo, clinging to a stubborn hope with flickering expectations for change. When change does begin to stir up the tropical air, tomorrow continues to remain a shrug of uncertainty.”

There’s a strong degree of complimentarity between Bank’s words and her images. Both are atypical, and both are illuminating. Bank has recorded the simplified economies of urban street life and the coexistence of human and animal species in Cuba afield. Urban rhythms tend toward the frenetic, while “the slow tempo of daily life in el campo is driven by the weather and seasons, a spirit of cooperation and loyalty to Fidel.” Except for the last aspect, which is singularly Cuban, the same could be written about many agricultural ecosystems.

Likewise, many cities share Bank’s evocation of Havana as “a maddening, unpredictable, chaotic hub.” There is hesitant respect on both sides for the other. “Campesinos,” Bank observes, “express fears about going to the big city,” while those habaneros who moved to the city from the farm have no desire to return. However, Cuba’s rural heart lingers in many Cuban souls. Some, like the essayist for Cuba: Campo Adentro, romanticize their rural upbringings, and certain cubiches, or Cuban-Americans, proclaim their own pride at having grown up in el campo.

Some of this is familiar in any consideration of city mouse/country mouse dynamics. But there is a nuanced interdependency present in the conversation, a mutuality that informs and amplifies what Susan S. Bank has transcribed. On both fronts religion plays a substantial role. Visitors will find altars in most Cuban homes, and a spiritual foundation bonds urban and rural Cuba. Bank’s religion is that of attention to and enlightened, respectful awareness of what she describes as “the casino of life with all its bittersweet shades of hope and despair.”

Finally, connection is at the very heart of the matter in these Cuban images. In both city and country, Bank found and embraced a person who became her ally, who offered her access to the lives and spirits inside the veneer of stereotypical congeniality. In return, Bank has given back a portrait that reflects lives lived in richly complex times in a country full of hope, a place where the unlikely partners with the ungainly to create something uncanny and beautiful. 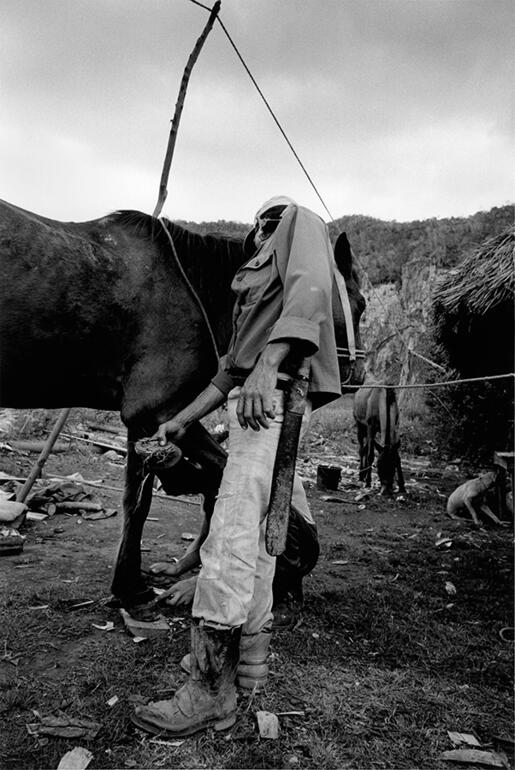