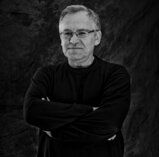 In Stanko Abadzic’s world, past is present, and present past. Old men trudge up narrow, noirish-lit stairways, penny-farthing bicycles roll by — their young riders in knickers and lace-up shoes — and clothes dry in the sun on high, outdoor lines strung between buildings. The Croatian photographer’s signature pictures, which he calls subjective documentary, are peppered with living remnants of yesteryear, symbols he uses to evoke a yearning in us, perhaps best described by Roland Barthes in Camera Lucida: “This longing to inhabit … is fantasmatic, deriving from a second sight which seems to bear me forward to a utopian time, or to carry me back to somewhere in myself…”

While Abadzic admits that nostalgia may play a part in his impetus to make these pictures, to be sure, it’s not the whole story. In a photograph from his “Adriatic Routes” portfolio, for example, Abadzic captures at a distance, from a low angle, a boy in mid-air, high jumping over a long, thin tree branch attached to two tall vertical branches, all held together by a crouching friend on each side. The boys aren’t on a beach or in a grassy park, or even on a patch of dirt; they’re high jumping and landing on a field of large stones. This image charms us, as many of Abadzic’s best pictures do, as much by what we don’t see as what we do. In this one there are no other people (no adults!), no cars or soda cans, no commercially branded clothing, no ubiquitous artifacts of modernity. The photograph is about the primitiveness, effectiveness and graphic beauty of those branches, and especially about the youthful exuberance, energy and joy in the jumper’s face and body language. Perhaps Abadzic is also reminding us that it’s still possible for children past the age of five to play without holding small electronic devices in their hands.
In his most powerful evocations, Abadzic uses dramatic morning or late-afternoon light and long, inky shadows to create his beautifully designed, dynamic compositions. Often they are animated by patterns and perspectives created through the repetition of forms.
From his home in Zagreb, Abadzic says, “For me, black-and-white photography is more powerful and more expressive for the motifs that I shoot. It gives my photographs a richer graphic range, emphasizing the contrast between light and shadow, and intensifying the dramatic element in a motif with a patina. Color is seductive; our eyes see in color, which makes black-and-white photography more difficult — you have to imagine the world in black and white. But that’s the challenge and the fascination. As long as there is black-and-white film, I will continue to use it.”

A fulltime photographer who supports himself through the worldwide sale of his prints, Abadzic is a self-described lone wolf, observing and exploring his environment like the protagonist of Hermann Hesse’s Steppenwolf.
“I am interested in individuals, not masses,” he says. “In Prague, where I lived for seven years during the war in the former Yugoslavia, I met people who didn’t participate in the processes of globalization. Instead, they lived hermetic lives behind the facades of a city whose streets are thronged by hordes of tourists. While it is difficult to penetrate their hidden world protected by ivy-covered walls, if you do, you’ll find plenty of spontaneous and genuine motifs. In the cases of both architecture and people, I am interested in the marks of time, a record of duration. On glass facades there are almost no indications of the passage of time. I want the object of my work to reflect my worldview and emotional state.”
Emotion is certainly the central theme of Abadzic’s photography. He is moved by what he sees and he wants to move those who see his work. “The greatest praise I can get is when my photograph touches a viewer in some distant part of the world. Such genuine communication is what I value most. If there is no emotion, I will not shoot the photograph. Emotions are becoming the most precious treasure in a world focused on materialism and consumerism. The whole organization of life and everyday activity makes man a machine that runs errands, completes his tasks, and has ever less time to experience real, deep emotion. I have consciously chosen modesty, freedom and simplicity — both in my photo equipment and in the way that I live — so that I don’t get trapped in the superfluous, useless jumble and dictated behavior, and to have enough time for my creative work.”
In addition to the strong sense of architectural and cultural history in the content of Abadzic’s images, there are also some direct references to photographic history, such as the high angles and street scenes in Andre Kertész’s work. One may assume that the frequent appearance of bicycles in Abadzic’s photos is due to their formal graphic beauty as well as their simplicity as a mode of transportation.
“Well, here’s the truth, for the first time,” he says. “My father was the chief of police in Vukovar right after World War II. He had a bicycle that he kept even after he had stopped working, which my brother and I were not allowed to ride. Only when our father was not at home did we dare try it — forbidden fruit is the sweetest! That’s the kind of childhood experience that stays with you all your life, and maybe that’s why there are so many bicycles in my photographs. I grew up in very modest circumstances; we made all our toys ourselves, and we loved them all the more for it. What contributed most to the formation of my worldview was the slowness of life, its simplicity, and the close proximity to nature we enjoyed. The more slowly you live, the deeper you feel your environment and the world around you. It is the same with photography.”

Born in Vukovar in 1952, Abadzic received his first camera, a gift from his father, at the age of 15. Self-taught through books and exhibitions, he worked commercially, shooting weddings and soccer games, and later worked a 10-year stint as a photojournalist for a local newspaper. Married and with a child, in 1991 his life was turned upside-down when Croatia declared its independence from Yugoslavia. When war broke out, Abadzic told an interviewer in 2007, “We left everything, and ran for our lives.” Moving to Germany, he worked in any he could: as a waiter, teacher and shipping agent. His photography was back-burnered, as the German government, in efforts to block immigrants from gaining citizenship, forced him to apply for visa extensions every three months.
After four years of that (just one shy of citizenship requirements), the extension was denied, and Abadzic moved his family to Prague in 1995. Inspired by the city’s beauty and positive energy, it was there that he developed into a fine art photographer. “In those seven years I lived like any other resident,” he says, “and I explored and photographed what, to me, is a magical city. The photographs made there have the greatest concentration of my energy, because the city was my haven during exile. Feeling uprooted, I frequently caught myself going into antique shops to find familiar scents and traces of the life that had been interrupted by war. I often go back to Prague, returning to places I photographed earlier, and I see that some of those places are gone, they have disappeared.”

Now divorced, his son grown and independent, Abadzic is free to devote all of his time to photography. “I feel that is a privilege,” he says, “because as I followed my pictures, I have met so many wonderful people.” He eschews political themes because of the preponderance of media focus on images of violence and war, and whether he’s shooting street candids, billboards, still lifes or nudes, Abadzic wants to depict triumphs of the human spirit.
He laments what human beings are losing in their obsession with the “next new thing,” and thinks the price exacted for cell phones and Internet access far outweighs their benefits. Even the advent of digital photography means only one thing for this purist: the closing of studios and labs that develop film and print black-and-white photographs.
“Those who use digital cameras tend to think less and less about a photograph and its elements, expecting that quantity will somehow yield quality,” Abadzic says. “This a misconception and the reason that the most frequently used button on a digital camera is ‘delete.’ Young people talk much about pixels and technique, but hardly anyone talks about what makes a good photograph. With digital photography there is more manipulation, even stealing, and it’s difficult to prove authorship of an image. I used to be adamantly against digital photography, though now I admit that good photographs can be made in other mediums too.”
Currently preparing for a 100-image show in Zagreb, Abadzic’s latest book, Paris — Sketches for a Portrait of the City, will be published later this year. His “great wish for the future,” he says, “is to photograph China, where the old is giving way to the new so quickly. These tensions and changes are interesting to every photographer.” 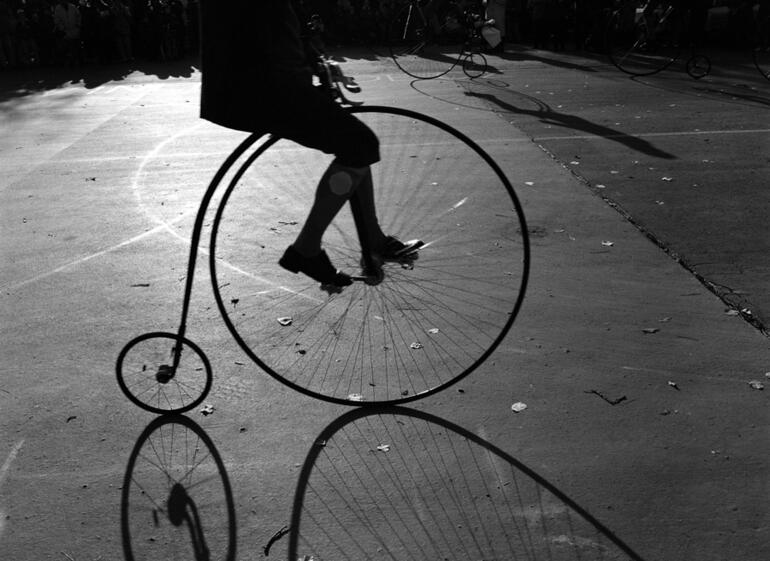