The eight-year project took Salgado to 32 locations ranging from the polar regions to the Galapagos with the goal of presenting a view of the planet when mankind lived in harmony with nature. Inspired by the reforestation of his family farm and environs in Brazil, Salgado set out to document the Earth’s pristine natural sanctuaries with the hope of inspiring their preservation.

In addition to a touring exhibition that includes stops at The Natural History Museum in London, The Royal Ontario Museum in Toronto, The Ara Pacis Museum in Rome, and the Jardim Botanic in Rio de Janeiro, Taschen has released trade and collector’s editions of the book Genesis, which was designed by Salgado’s wife, Lelia. The mammoth limited edition comes with a stand designed by famed architect Tadao Ando.

How did the idea of Genesis evolve?
We have an environmental project in Brazil where we started to replant the forest. When I finished my work in Africa, Migrations, I became very sick. I stopped photography. My health was not good. Not that I caught a disease, but I saw so much distress there. So much violence, so much brutality. I felt that my own body was starting to die. I went back to where I was born in Brazil with my wife. When we arrived, the farm where I had been raised and that had been fifty percent rainforest was now half a percent of rainforest. Lelia said, “Sebastião, why don’t you replant the rainforest that was here before?”

So we went to see an environmental engineer to discuss the project. We started to plant two million, five hundred thousand trees. I did talks around the world to raise funds for this. The project was going and I felt the life coming back to me. Hundreds of thousands of trees were growing and the water came back and the mud came back and the animals came back and the life came back to me again. And I had a big wish to do photography again. We organized a project to see us—mankind—from the beginning. Not us today. Us when we lived in equilibrium with nature. To see the landscapes. I conceptualized the project with Lelia. I thought eight years would be enough to give a good representation of the incredibly beautiful things we have on our planet.

How did you decide on your locations?
We knew I had to make shots on the very south and the very north of the planet, and in the Amazon, Africa—sanctuaries on the planet where the most biodiversity is. The eight years on the project became the biggest pleasure of my life. I did 32 stories.

What’s your ultimate goal with this project?
That people will look at the photos and see what is pristine on our planet, what we must protect as nature’s heritage and not just human heritage.

This planet was not made just for humans.
Exactly. We are just one species among thousands of species. We appropriated the planet. It became “our” planet. We felt we had the right to destroy things. When you destroy a tree you destroy the houses of thousands of little creatures. What right do we have to do this? When we destroy the forest we destroy our own possibility of life.

Flying over to Los Angeles from Atlanta I was flying over desert. I worked a lot on the Colorado plateau for Genesis. There were all these cattle ranches. This is not productive land anymore. The forests are gone. Same all over the world. We are killing the Amazon.
We need to protect what we still have.

Recently, in the north of Norway, in a small fjord, millions of fish died because of a lack of oxygen in the water. Humans did something at the entrance of the fjord that modified the water, which resulted in not enough oxygen for the fish. If we continue like this one day all animal species will not have enough oxygen. We keep destroying forests. Trees are the only machines capable of transforming CO2 into oxygen. If we don’t breath, we die.

Second point, the system of water. You take a shower, it takes three hours to dry your hair if you don’t use a hair dryer or a towel. Okay, for me, less than a minute (referring to his lack of hair). Trees are the same. Trees are the hair of the planet. When you have no trees, when rain comes to the dry landscape the water in one minute turns to streams and carries the soil away. When you have trees the root system and all the branches and all the leaves hold the humidly and slowly distribute it.

Our bodies are more than 90 percent water. We need it to drink, for agriculture, for industry. I’m sure we’re not going back to a primitive way of life. I’m not expecting this. But I’m expecting that we can organize a planet where all species, us included, can live. That’s my wish with these pictures. That we see what is pristine. That people see what we’re doing on our slice of land in Brazil. We now have about two million trees in the ground.

Where is your place in Brazil?
The Rio Doce Valley, which is between the states of Minas Gerais and Espirito Santo, about 400 miles north of Rio de Janeiro. It’s an Atlantic forest, it’s not part of the Amazon system. We are working with the Brazilian government on a 35-year project to recuperate all the sources of water for our river with a water shelf as big as Portugal. We have about 650,000 sources of water. To create a water source, we close a water source. We don’t allow the cattle to walk near it because they kill the land—cows are 1,000 pounds or more. We must have soft land and plant about 150 trees per source of water and plant trees that retain the water well.

The Rio Doce is a 600-mile river. We believe that in 35 years we can recuperate the river to what it once was. I met with the president of Brazil. If this pilot project works well it can be applied to any river in the country and protect our water sources. Other countries must do the same. When you see the Rio Grande, the Green River, the Colorado River, they are all dying. The amount of water is being reduced.

Forty-six percent of the planet is still in pristine shape. That seems surprising.
Antarctica is a huge continent. We have the deserts of the world. The forests in Siberia, Alaska, Canada. The National Parks in the United States. We still have rainforests and mountains over 10,000 feet that are seldom exploited. We must keep these areas pristine and we must bring back 30 or 40 percent of the other parts. If we do this we can survive as a species.

Are you still shooting film for your projects?
No. I shot about half this project on film, then switched to digital. But I shoot the same way. When I get back to Paris I have contact sheets made. I bring a lot of cards with me. I do my editing with a loupe, not on a screen. I have work prints made for me which are about postcard size. When my selection is done we make a 4×5 negative to make my larger prints. My negatives now are far better than the ones I had shooting medium-format film. We introduce Tri-X-type grain digitally, adjusting the look of the grain to go with each image.

When we talked years ago in Paris it was after Bosnia, and you were very discouraged about the human condition with all the violence you saw. And that was before the horrors you documented in Rwanda.
That was 1994, 1996, 1997, 1998. Devastating. I felt so destroyed seeing thousands of people die with no possibility of them being buried properly. Piles of dead that were buried with bulldozers. After this is when we started the environmental project in Brazil. The book Migrations Taschen did was in 2000. The Africa book was in 2007. I did nine or ten trips to Africa afterwards for Genesis, photographing the tribes, the animals, the landscapes from a hot-air balloon. It was a celebration of life. 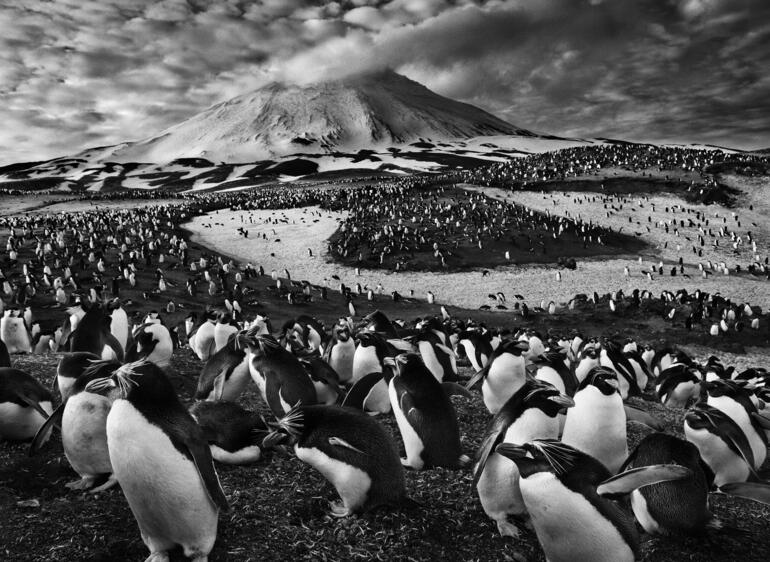