Her father played leading roles. His sudden, too-early death, when Hadley was in her mid-twenties, set her on a melancholic journey of rediscovery. Photography has abetted her search.

When Hadley was growing up, her father worked as the director of the Gardner, overseeing a large collection of works by such master painters as Botticelli, Vermeer and Rembrandt. The museum had been envisioned by Gardner and her husband Jack in the late 1890s, and was completed after his death. Isabella took on the project with intensity, specifying the most minute details, and under her eye an ornate museum emerged that echoed Venetian Renaissance palaces.
The director of the Gardner Museum had some interesting perks. One of which was the use of an apartment on the fourth floor of the building, where Gardner herself lived until her death. Thus, young Sarah Hadley was immersed in great art, set in a Venetian context, and there is probably little question about her career choice, because, as she notes, “art has always been an integral part of my life.”

Her recollection of life in the Gardner has a storybook charm to it.
“As a child, I was most interested in the mythological creatures in the museum-—the lion statues at the front entrance and the dolphins which spouted water in the fountain. My favorite piece was the 18th century sedan chair in the Veronese Room, which I would slyly enter and imagine I was a queen or princess being carried somewhere important. I loved exploring the museum from top to bottom. My friends and I basically treated the museum like a large playground full of unusual and interesting objects.

“I am sure,” she observes, “that the surreal and dreamy nature of my work was influenced by growing up in such an extraordinary place, where every room feels as if you have stepped into a different century.”

As an art history major in college, Hadley veered away from Mrs. Gardner’s Renaissance aesthetic and began focusing on contemporary art. Growing up, she knew photography only peripherally, primarily as family photographs.

”There was very little photography in the Gardner other than portraits of famous people,” she says. A local exhibition changed her mind and historical frame.
“I interned at the Institute of Contemporary Art in Boston after my freshman year. While I was there I saw an exhibition of contemporary photography, which included the work of Nan Goldin, the Starn Twins, Marie Cosindas and Sage Sohier. I was mesmerized by the show, and it was then that I realized photography could be an art form that expressed something deeper.”

Not long after seeing that exhibition her life course took a turn to Italy.

“I went to live in Venice for the first time and began experimenting with black-and-white photography. Venice felt immediately familiar to me when I lived there in my twenties, as not only was the Gardner museum interior built as a Venetian palazzo, but Mrs. Gardner also collected paintings of Venice, Italian furniture and other ephemera, so all of it was very much a part of my consciousness.”

One of the contemporary art world’s hubs is a festival in Venice called the Biennale. Given her years visiting Venice and growing up in a Venetian setting, coupled with studies at ICA Boston, it was logical that Hadley would find a productive synthesis of life and art at the Biennale. While there she developed a more nuanced appreciation for photography as contemporary art.

A characteristic of the Gardner Museum is that thirteen of its masterpieces were stolen in a still unsolved 1990 burglary. There are, in fact, empty frames on the walls that indicate the absence of the works. Gardner insisted that the gallery spaces be maintained just as they were when she died in 1924. (Today, museum visitors can use a smartphone app that places images of the lost paintings back in the frames, allowing us to see things that aren’t there. Like ghosts.)

Hadley recollects darkness at the Gardner. “Even on sunny days the galleries are not well lit, and the amalgam of Medieval, Gothic and Renaissance decor, together with a myriad of religious icons, made it a sometimes austere and creepy place to call home. Venice can be similarly eerie on wintry days.”

The city of Venice is laden with a sense of imminent doom. The Adriatic Sea is undermining it bite by erosive bite. When Hadley was there after the death of her father, she made “Ascension,” a photograph of a man climbing a staircase. The image is perplexing, in that the figure, off-center and nearly obscured by shadow, occupies a very minimal percentage of the picture space relative to the lights, obelisk and bridge structure, yet it was the driving force in making the picture. Following “Ascension,” Venice became the site of a ghost hunt. This image suggests that the hunt had as much to do with the city as with the man.

Her father’s imprint was indelible. His sudden absence left her profoundly upset. “He loved Venice, as did I.” As she states in an interview with Susan Burnstine in the book Lost Venice (Damiani, 2020): “From the beginning I envisaged this project as a search for my father.”

Venice embodies melancholy. When Hadley refers in her title to “lost” Venice, there are two ways to think about loss. Hadley first visited Venice in the late 1980s, at a time when tourists didn’t overrun the city as they do these days.

“There was a time when you could walk along the canals and hear only your footsteps, or find yourself alone in Piazza San Marco…. That Venice has long since disappeared.”

Hadley’s use of ancient Venetian glass, nighttime scenes with longer exposures and heavy doses of humid atmosphere reinforce the liquidity of the city, and the potential for loss. There’s a sadness to these photographs, a sense of vanishing, of light shivering away into darkness. Just as the city sits on uncertain foundations, so do Hadley’s photographs display a willingly loose grip on reality.

From a technical standpoint, it may be surprising to learn that these photographs, which seem so filmic and analog, were in fact created with digital cameras. Hadley has learned a great deal about using image-manipulation software to achieve that watery quality in her photographs.

Her photography wasn’t always so lyrical or liquid. Hadley admits that her time with old master paintings helped her facility with composition and color. She also worked as a photojournalist, so her sense of photography as a storytelling medium is strong. The sudden loss of her father seemed to cement her commitment to becoming a photographer.

“Some of my very earliest photographs were taken with a 110 camera,” she recalls, “so they actually resemble Holga photos, which I discovered and loved for their surreal and dreamy nature.”

In Washington DC she attended the Corcoran School of Art, where, she observes, “I took the first photo that really resonated with me. I photographed a girl on a swing in a park with her father’s feet visible in the distance. That was the first picture that I felt that told a story and held some emotion.”

After completing her studies there she moved to Chicago, a decisive step away from Boston and the Gardner on a westward migration that has led to her living in Los Angeles for over ten years. In Chicago she met the photographer Jane Fulton Alt.

“She became my mentor and really encouraged me to look inward and to begin telling more personal stories. It was during this time that I started to work on Lost Venice.”

Hadley made three trips to Venice in three years to seek both her father’s ghost and the Venice he introduced to her. Since she knew the city so well, she could “hit the ground running” and photograph from morning to night.
“I wanted to take the viewer on a journey through this extraordinary maze, where you can get lost for hours only to end up in front of a beautiful palazzo lit up at night.”

It was a fully immersive experience. She would then return to the States to edit and “refine” her images for months.

Hadley grew up in a state of anachronism. Time, she acknowledges, is ambiguous. Fortunately, she is in love with the past, as it informs and compels her to keep making work in the present. “I believe,” she said in her interview with Susan Burnstine, “that visual art offers us a way to dialog with our past and to access our emotions, in much the same way that poetry does.”
Loss, while traumatic, compelled her visual journey and her search for her father in a city that no longer exists.

Addendum
All works copyright Sarah Hadley. See more of her work at sarahhadley.com and instagram.com/sarah_hadley_art. She is represented by Afterimage Gallery in Dallas, Texas; Robin Rice Gallery in New York; and United Photographic Arts Gallery in Tampa, Florida. 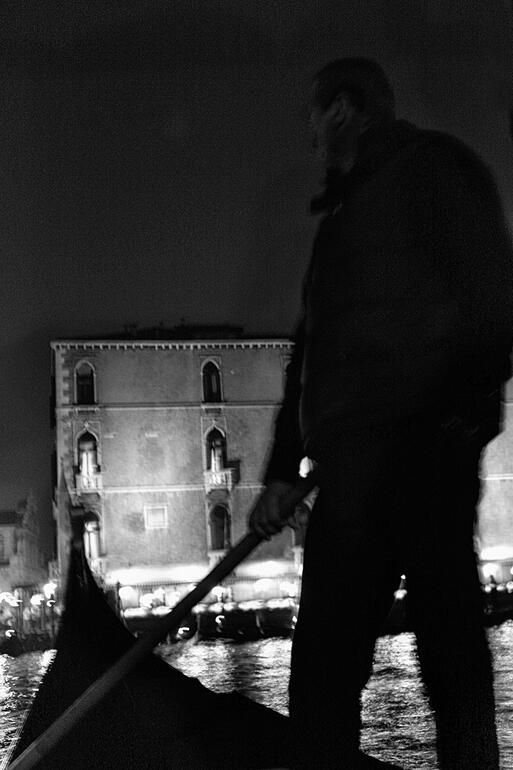