The photographer offers a crucial insight to her work in this statement, which appears (as do the photographs in this feature portfolio) in her book Americans Seen (Nazraeli Press, 2016). The photographs reveal some singular, specific moments of openness between everyday Americans and a roaming, respectful observer, who sought to escape wintry Massachusetts on travels to sunnier locations where she would use a car to wander about the territory, seeking unforeseeable encounters.

As a representational medium, photography is clearly, inherently skilled at describing facts. Given the sophistication of modern digital camera technology (both pre- and post-exposure) and image-manipulation software, creating a vivid image is not a terribly difficult accomplishment. You will note, however, that the work in this portfolio was made in the late 1970s and early 1980s. Vividness like this was harder to come by for those using analog tools. But as the portfolio reveals, Sohier found a subtly exquisite means of achieving analog lucidity.

Nuance, implication and the objective of Truth are challenging goals. Especially when one is photographing strangers, whose visible lives can scarcely suggest the real circumstances they live with day to day. The photographer has learned to use her tools wisely. “As I age,” Sohier says, “I’m trying to make a kinder/gentler kind of portrait which is more clearly collaboration than ‘capture.’”

The scenes here demonstrate that vivid, enduring truth Sohier mentions in her introduction to Americans Seen. One might imagine the images to be friezes, carved in radiant marble and denying the passage of time. There is a simple trick to accomplishing this, which will be described later.
Sohier’s images incorporate an abundance of detail that creates a rich, meaningful environment. These settings hint at the intricacy of a human life and affirm her goals as a photographer. Sohier points out a challenge in photography’s capacities: “A photograph,” she writes, “derives its strength from the singularity of its assertion, but people’s lives and beliefs are more complex than that.”

Sohier (pronounced “sawyer”) sees things in context. What’s going on around her portrait subjects is intimately and significantly tied to the person(s) portrayed. “This was a conscious strategy,” she affirms. “I wanted the viewer to be able to see every detail in my photographs. I always shot at f11, f16 or f22 so that I would achieve as much depth of field as possible. I thought that this created a richer, more complex story within the photograph.”

Sohier wants to persuade you to do more than just glance at her work. Dive into the details to appreciate photography’s capacity for description. Get the big picture. One might say this is tantamount to the voyeuristic pleasures we’ve all been having as we peruse the spaces surrounding participants in Zoom calls. So much information accrues there.

Seen from our perspective in 2022, Sage Sohier’s images are only subtly nostalgic. There’s a timelessness, an even-handedness to the work. It’s nonjudgmental. Light fills the pictures from corner to corner. There aren’t many secret, deeply shadowed spaces in the work. Whatever country they inhabit—America seems as likely as any, and Sohier’s title insists upon this place—the people we meet seem relaxed and open. It’s a surprising quality, given the conditions and manner in which Sohier made the images.

She enjoyed her pre-GPS “wanderings” and appreciated “the adventure of getting lost” on trips that allowed her to escape Boston winters. Getting lost forced her to interact, slow down, pay attention. Throughout her 1980s travels, in both rural and urban environs, Sohier found that people were more open to connecting and willing to be photographed in their homeplaces. Certainly more so than most people are today.

Much of Sohier’s photography is carried out al fresco; the images celebrate outdoor settings. Sometimes a tableaux seen in passing inspired a photograph. “[A] theater of the streets emerged from the boredom of hot summer days…a great time to photograph people outside.”

While time doesn’t significantly mark our experience of the work, surprises do. Her images afford us little treats, rewards for looking closely across the middle-toned greys. (The milk cases described further on are full of examples.) The photographer herself may have been surprised in the taking of the picture; we viewers share the delights of the unexpected. Just as her own discoveries on the road came as a result of looking closely and taking time, we benefit from the pauses Sohier’s work offers us.

The photographer deserves a bit more space to elaborate on her notion of truth and photography.

What guided her toward this nuanced notion of the medium? While Sohier did not earn a Masters degree in photography (an accomplishment that seems to be a necessity for contemporary artists), she came of age in the highly active photo world of the East Coast in the 1970s. Boston was a major hub. She crossed paths with Nick Nixon, Lee Friedlander and Garry Winogrand.

“Tod Papageorge had been a visiting artist my senior undergraduate year at Harvard,” she notes. Encountering him was “an unbelievably lucky break for me. Tod was incredibly eloquent about the medium, and he somehow made me feel not only that I wanted to become a photographer, but also that it was possible for me.”

Other important influences for her included Diane Arbus—“I was trying to figure out how she managed to make such psychologically acute portraits”—Chauncey Hare’s book Interior America (Aperture, 1978) and Bobbie Ann Mason’s writing, including her collection Shiloh and Other Stories (Harper Collins, 1982). Technically, she derived some of her technique of radiant openness from press photographers like Weegee, who used black-and-white film and a bare bulb flash for their work.

“I found that I liked to use my leaf-shutter medium-format camera to expose equally for inside and outside, so that windows would look like pictures-on-the-wall.”

A fine example appears in this portfolio. A shirtless young man leans out a window. His face and head tilt way back, reduced to a jaw, an ear and nostrils. A shadow angles across his torso; that shadow, however, is pale despite the exterior brightness. His left arm extends perpendicularly from his body. Observe that although the bright sunlight should be casting darkness along the arm’s length, it has a surprising glow. Furthermore, notice that the milk cartons on the right side of the frame, which face away from the window and thus should be deeply darkened, are illuminated enough to read handwritten labels taped along their edges, and the picture’s darkest shadows rest within the cubes.

If you look especially closely, you will note that the window, bright on its interior side, contains a crisp glow one might easily mistake for the sun. That brightness is a reflection of the flash on Sohier’s camera, a light source that explains the extraordinarily seamless nature of this image. Exterior and interior illumination blend along those mergings carried by the body. And the fact that this photograph was made on black-and-white film erases any differentiating light-temperature factors that might have marked color film.

The “picture-on-a-wall” effect is central to the stagy, frieze effect apparent to varying degrees throughout the Americans Seen series. It has largely evolved out of her current practice. “I don’t shoot that way anymore,” Sohier notes, “though I do still use flash a lot. I prefer more of a natural-light effect now.” Such an approach serves to highlight specific areas—like using a focused spotlight versus a flooding, open-bulb light.

As a teacher starting in the 1990s she began to notice something in her students’ photographs that changed her practice from the spot-lit stage. “In the 1990s,” Sohier recollects, “I noticed that I started to like my students’ color work more than their black-and-white work.” She took that as “a sign that I should try to work in color.” Her work in monochrome, however, was crucial and fundamental.

Along with these Americans Seen images derived from the public theatre of everyday life, she photographed gay and lesbian couples in their homes, and domestic animals sharing their homes with humans. Unfortunately, the photobook publishing world in the 1980s was disinclined to release books on such topics. Sohier has benefitted from changing tastes, tolerances and times; since 2007 she has published seven books of her work, including both color and black-and-white material (though not mingled in any of the volumes).

It’s worth noting that the book created with these photographs is itself an eloquent manifestation of Sohier’s values. Even the sequence of the book is essentially her own. Nazraeli Press accepted it with no more than a tweak or two; this is highly unusual. Photographers’ skills don’t typically lie in this area. The publisher described most photographers as “hopeless editors of their own work.”

Sohier had a certain advantage of historical perspective in Americans Seen; the work had distanced itself from her, allowing the improvisatory intimacy to reveal itself. “There needs to be implicit trust between photographer and subject, and it becomes extremely important for the photographer to be thoughtful and responsible during the editing process as well. Occasionally,” she adds, “there are terrific pictures that need to be edited out.”
The book is an exemplary accomplishment in the photobook arts, and deserves your attention as much as the individual images do. It’s well worth the price of admission. 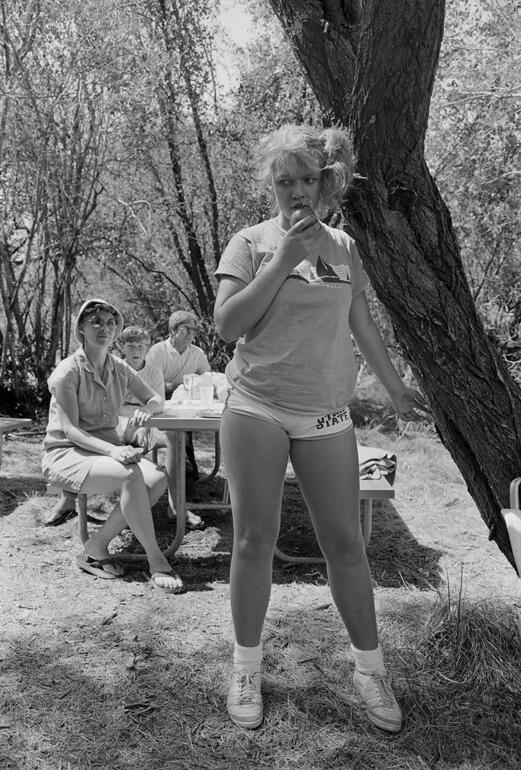