“Fortunately for me, I’d grown up in Communist Poland, and speak Russian fluently. The gist of their conversation concerned my camera, because when they inspected the ground glass there were no images there. They had a problem in arresting me since there was no evidence that I had shot any pictures. They had no idea I was shooting film! So they gave me a very stern warning and I departed as quickly as I could, my camera and film holders intact.”

Loranc began his first photographic journey quite modestly. His first camera, given to him as a communion present by his godparents, was a small medium-format [6×6] Druh, made in Poland. This broke almost immediately. Years later he was traveling in Russia and saw a sexy East German-made Pentacon Praktica LTL, which was a copy of a Nikon. It came in a little suitcase that contained an enlarger and trays and safelight and even chemicals—everything necessary to make and print photographs.

Camera equipment was very difficult to come by in Eastern Bloc countries, and Loranc wanted this camera desperately. But it was incredibly expensive, way out of his budget. However, he was wearing a pair of the latest Levi jeans, which were highly desirable back then. “People don’t realize that having Levis in the Eastern Bloc was like having a Mercedes Benz here. I left that store with my first decent camera and a pair of polyester pants that were so short I looked like an idiot the rest of my trip.”
Loranc’s formative years in Poland played out amidst centuries of architectural splendor. Even everyday functional objects were often crafted by artisans who added a certain expressive flair or embellishment to the items they made. He grew up surrounded by things that felt special to him in an artistic way, and this has informed his personal aesthetic ever since.
“My first inspiration as a visual artist came from the paintings of [Józef] Chelmonski, [Jan] Stanislawski and [Józef] Pankiewiz. I’m drawn to the richness of their work, their sense of drama and use of light and dark. The darker color palette sets a darker mood, which I find appealing. A painter interprets his subject before it is painted, filtering the scene using his skill and artistic sensibility. This is something I try to do with my photography.”

In Communist Poland there was no easy access to fine art photographic books, let alone original prints by master photographers. Loranc remembers the prints he did see as having an overall dullness and lackluster quality. So when he arrived in California in 1985, and saw original work by Ansel Adams, the Westons and Morley Baer, he was in awe of the richness of tone, the depth of the blacks and the glowing light that emanated from their prints. He knew immediately that this was the look he wanted to emulate in his own work.

“For some time I had a print by Morley Baer which I kept in my darkroom to use as a comparison,” he says. “When I was able to achieve the kind of richness in my prints that I saw in Morley’s, I knew that my skills were advancing in the right direction.”

Loranc enjoys photographing meditative things, like tule reeds, when the light is soft and just right for such photography. Such smaller intimate subjects, which are often overlooked because of their commonplace nature, he finds to be quietly expressive. He believes that minimizing what is included in the frame not only helps focus the viewer’s attention, but more clearly conveys the message of the photograph.

“I appreciate that light is a messenger,” he says, “revealing the world at every instant. The magic of photography is its ability to slice a moment out of time, which you can later hold as a print in your hands. When I’m in the outdoors photographing I feel my existence intensely. My camera becomes my voice as I participate in the conversation I am having with the world. There are special moments when I know that I have connected with something bigger than myself, when I have focused the camera on the essence of my subject. At that moment I feel a fullness that I cannot describe in words. It is a visual experience, and I can only refer you to my finished print to explain the fascination and connection I feel for the place I have photographed.”

Loranc first began photographing river tules at the Nature Conservancy (aka Consumnes River Preserve) in Galt, part of the Great Central Valley of California. His aim is to show the subtle beauty of the disappearing wetlands. Many people overlook this beauty because it is not easily accessible. Loranc likes the idea that this area is being preserved more for wildlife than for people. He hopes that when people see his photographs they will want to help protect and preserve these fragile lands. This is a crucial impetus behind his efforts.

“I am working on a book that will feature my photographs of tules with poems by Robert Lax and a summary essay by Dr. Anthony Bannon, the former Executive Director of George Eastman House,” he notes. “The book has been in production for over a year as we developed a special printing process to reproduce my work as authentically as possible, and we hope to have a small edition with silver-gelatin prints available for collectors next year. One of the poems we are including is called ‘A Thing That Is.‘ I feel that title neatly sums up much of my photographic philosophy. I try to make images that say everything without saying more than is necessary.”

Loranc makes lengthy annual pilgrimages to his native Eastern Europe, drawn back by the allure of his childhood memories. He now owns a house in Galadus, Poland, which he uses as a base for summer-long photographic expeditions. There is a large part of him that misses the cultural patina that permeates the older villages and historic districts of the cities of Poland and Lithuania. He finds evocative images in cobbled nighttime streets and the decaying facades of ruined medieval churches. Through long exposures and mysterious tonal rendering he captures a unique expression of these venerable places and structures.

“I’ve always believed your strongest work comes from exploring your surroundings and the places which feel most familiar to you. I have deep roots in Poland, and also Lithuania through my grandfather. I’m always longing to visit these pastoral areas and photograph them, which I wasn’t allowed to do during communist rule. Going back is a very powerful experience, like recovering a little of my childhood. We all come from somewhere. Exploring this region now with my understanding of who I’ve become gives me a great perspective.”

These can be challenging trips, however, because Loranc doesn’t really like traveling all that much. He doesn’t like the pressure of feeling that he must produce something new and exciting for the galleries that represent his work. It can also be challenging technically and logistically, because he is carrying film through so many airports, and traveling with a 4×5 camera and tripod and all the other necessary gear.

He might be in Eastern Europe for one month, and sometimes the weather will be completely uninteresting. At these times he shoots no photographs, knowing he could be taking beautiful photos of Mt. Shasta, right outside his home’s front door. But there is something pushing Loranc to travel, especially when he receives moving emails from other people with similar backgrounds in Poland and Lithuania. They see his photographs and want to make their own pilgrimages to explore their roots. He finds such messages very rewarding.

“Photography is a very powerful tool,” he says. “It captures a moment in time, saving that instant for longer than it existed. I love being able to express something that captivated me. When I am out shooting I am unaware of the passing of time. I am completely absorbed by the subject I’m trying to capture. Hours can go by without my realization that they have passed as I concentrate on seeing what is before me. Then being able to examine and interpret that segment of time and space later is an amazing thing. And to share this moment in time, which I’ve captured on a piece of paper, with other people when they look at my work—that is truly the best feeling in the world.”

Addendum
You can see much more of Loranc’s work at romanloranc.com. His books include Absolution (Photography West Graphics, 2013), Fractal Dreams (Photography West Graphics, 2010) and Two-Hearted Oak (Heyday Books, 2003). He is represented by galleries in the U.S. and Asia, and his work is held in numerous museums and institutions, including the Nature Conservancy of California, San Francisco. 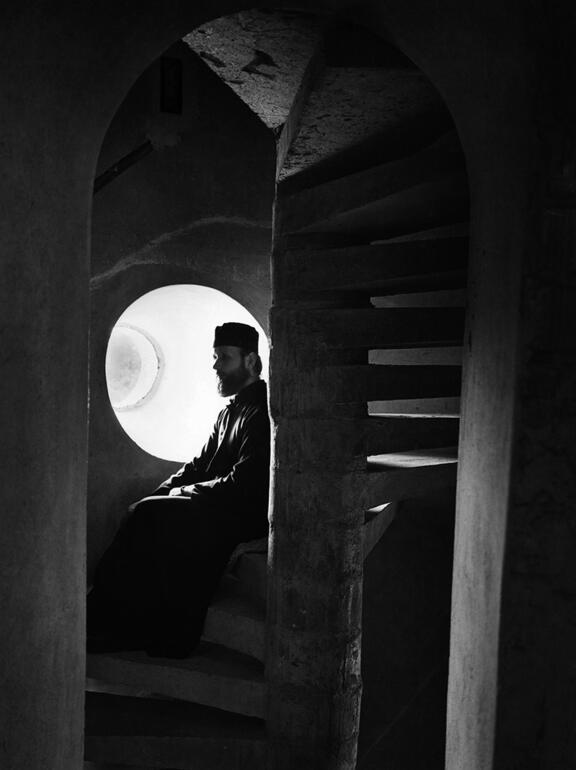