The design and symmetry of the composition are critical, as is the flat light. The focus is razor-sharp, the moment, perfectly still. The man’s body language is relaxed, as though he has all day for gazing. The picture not only amuses, it manages to make a statement about gardens, ladders, leaf-covered walls and, through the human gesture of the hand clasp, something about time, human curiosity and the simple pleasure of looking.

Humor is especially difficult to achieve in still photography. There’s Lartigue, some of Doisneau, the witty Elliott Erwitt and maybe Wegman. Funny photographs are rare because there’s no pause between the setup and punch line. Print cartoons need that perceptual pause between visual image and unpredictable written caption. In a photograph everything is visible all at once, at first glance; there’s no element of surprise. In the history of photography there are humorous moments captured, such as Ruth Orkin’s little girl cheating at cards on the steps of a New York City apartment building, and Doisneau’s couple at Romi’s Paris shop window. In those cases the humor is in our recognition of universal human behavior.

In hundreds upon hundreds of instances, in images that look both preconceived and carefully designed, Smith, who claimed he did neither, took models and minimal props to pre-scouted locations, and created his magic. Some of his pictures suggest Buster Keaton’s deadpan, Harold Lloyd’s dandy, Magritte’s sense of the absurd, Seurat’s people in the park and Steinberg’s captionless everyman conundrums. No doubt that Smith was aware of all of these artists, but in photography, he was an original.

Born to a wealthy and imposing New York fashion industry executive—a father he felt he could never please—Smith said that he became a photographer to get as far away from his father’s world as possible. After earning his Bachelor’s degree in Divinity at the University of Virginia, he attended Yale’s vaunted MFA program in photography (then headed by Walker Evans) in the early 1970s. Though he was not an Evans acolyte, the maestro’s influence is evident in the work Smith produced after leaving Yale.

In his escape from privilege he set out for points unknown, traveling for years, seeking to understand the experience of others through his chosen medium. A fellowship to work in Israel resulted in Smith’s first book, In the Land of Light, and he also lived and worked in Wales, Haiti and the American South. Smith portrayed the “common” people he encountered with an uncommon touch. His socially conscious, penetrating portraits express the nobility we’ve come to accept as a given of the genre, but Smith’s sense of light, scale and composition, and his ability to reveal character, make these early portraits stronger than most of their kind.

What came next could have proved disastrous, but didn’t. Instead, it gave Smith a career. Upon his return to New York he landed his first major commercial assignment: a series of executive portraits for H.J. Heinz, a daunting task for any young professional. Smith approached these captains of industry just as he had the coal miners in Wales—he humanized them. He attributed his successful results, first to his comfort level with these men—they were no different than the business associates of his father’s that he’d known as a child—and second, to his surprise, he found that he liked many of these CEOs, some of whom became his friends. Smith got beyond the formal pose and trappings of privilege and power, and created penetrating, intimate portraits.

His photographs of women tell a different story. In these pictures Smith fulfilled contemporary fashion and style assignments with his personal visions of the Feminine Muse. An unabashedly old-school romantic, his drive was to capture Her essence and ethereality. Feminist ideology and critique of the male gaze must be at least temporarily suspended to appreciate this body of Smith’s work. His muse is delicate, fluid and always beyond reach. One senses that rather than telling his models what to do, Smith paid close attention to what they did. While these alluring images reflect the formal photographic trends of their time, they will also endure as timeless homages to his feminine ideal.

Smith’s career flourished as he began to develop his signature style. He was hired by clients such as Neiman Marcus, Ralph Lauren and The New York Times, among many others, to solve a wide range of commercial, editorial and advertising assignments. His work was sophisticated and worldly, accented by international flavors—perhaps most prominently, British for the men and French for the women.

According to his wife, graphic designer Leslie Smolan, Smith had a complex personality; he was “a worrier, a nervous Woody Allen type—always seeing the glass half-empty, yet with a big smile on his face.” By phone from the home she shared with Smith for the past 30 years in Snedens Landing, New York, Smolan continues: “Rodney was the classic outsider. He never wanted to be like anyone else….The people who hired him and let Rodney do his own thing got the best results. Regardless of the assignment, he was always making his own pictures, always in black and white, always on film, always with available light, and he was best when given open-ended themes, such as “The Lines” [a 1995 New York Times Magazine assignment] that gave free reign to his imagination. For that one he shot skylines, hemlines, airlines, etc.”

Of Smith’s now-famous figures in landscapes, Smolan says, “He was more interested in the body language of real people than he was in fashion and models.” Smith’s working process, she says, “was one of spontaneity and discovery. When scouting a location, he spent very little time there. He didn’t take Polaroids. On the day of the shoot, he’d just start moving and suddenly stop when he’d found the right spot; using the environment as a studio, editing with light. He’d use his intuition about proportion and scale to feel ‘it’ when things were in sync. The pressure of the shoot actually made Rodney relax; no matter how many people were on the set, or how big the production, he was calm behind the camera and totally in control.”

Smith had a deep appreciation for things well-crafted, whether it was clothing, tools or architecture; “things that took time to build piece by piece,” says Smolan. “He wasn’t into immediate gratification. He chose antique glass for his windows, hired masons from Ireland to plaster his walls instead of using sheetrock and had paint applied with a brush, not a roller. It wasn’t about status,” she says, “it was about quality, precision and attention to detail.” Smith’s books reflect all of those values. Among them is his 1993 collaboration with Smolan, The Hat Book, a perfectly balanced showcase of photographs, text, design and printing. In 2005, he published a hardbound, Smyth-sewn 424-page self-promotion, with a tongue-in-cheek cover price of $95. Smith and designer David Meredith divided his most iconic images into 21 chapters, each one titled with the name of a great book. From the compendium’s preface:

This cleverly designed book’s most enduring joy resides in its ability to provide ready-made images capable of conveying innumerable ideas and feelings—everything from the delightfully decorative to the suggestively religious, from cunningly whimsical to sincerely surreal.

That clarity and self-confidence is also evident in the retrospective of his work presented last year at B&H (it’s posted on YouTube). Relaxed and on point, Smith matter-of-factly takes the audience through the highlights of his career, sharing stories and images, including photographs made 30 years prior that remained among his favorites: a moody landscape in Wales, a Cubist composition made in a French kitchen, and a forest scene that took hours for him to find just the right angle from which to shoot. Watching Smith in the B&H video, there is no indication that illness would cut his life short. The last few images screened come as a surprise, and leave us wanting more: his muse reimagined in sensual, saturated color.

In his blog, The End Stops Here, Smith shares publicly everything from philosophical and psychological insights to anecdotes about celebrities, and, once a year, an interview with himself. His posts provide intimate glimpses into the less-secure aspects of his personality. “Rodney’s struggle was to feel accomplished,” says Smolan. Two excerpts from the blog:

…But somehow the whole range of human experience, ranging from anger to joy, fear to happiness, etc., is an acceptable and downright positive attribute in my pictures. It is nothing to be fearful of. It represents what it means to be a small person in a very large universe and one’s reaction to forces much larger than ourselves. How could one not be anxious, as we are finite, small creatures, surrounded by a large emptiness? People seem to need some resolution to this quandary. I stand at the threshold, where fear cannot and perhaps should not be eliminated. Yet unfortunately, I cannot accept my own personal failing in my dealings with people. I am critical and at times destructive. As a photographer I succeed, as a person I am prone to constant failure.

One of my worst nightmares is of me standing with a group of other men, completely naked in front of a row of women. We have nothing but ourselves to share. We have no houses, cars, money, power, etc., to offer, only ourselves. I wake from this dream terrified that no one would choose me. This is how I stand before you in my pictures, completely vulnerable and naked, with a terrible fear, yet a small hope that in the end, despite all my failings you could still find a way to love me simply for who I am.

Why Smith found ladders and umbrellas so amusing remains a mystery. Maybe it’s because umbrellas can only protect us from so much, and ladders, well, those are always accidents just waiting to happen.

Addendum
All images courtesy of Rodney Smith. See more of his work at rodneysmith.com, and read his blog The End Starts Here at rodneysmith.com/blog. He is represented by galleries in Europe, Asia and the United States, including the Fahey Klein Gallery (Los Angeles) and Robert Klein Gallery (Boston). His work is on public view at the Mjellby Konstmuseum in Halmstad, Sweden through January 28, 2018 and the Smithsonian Institution Studio Tour in May 2018. Watch the B&H retrospective video on his life and work at:
bhphotovideo.com/explora/photography/tips-and-solutions/photographs-rodney-smith-1970-2016. 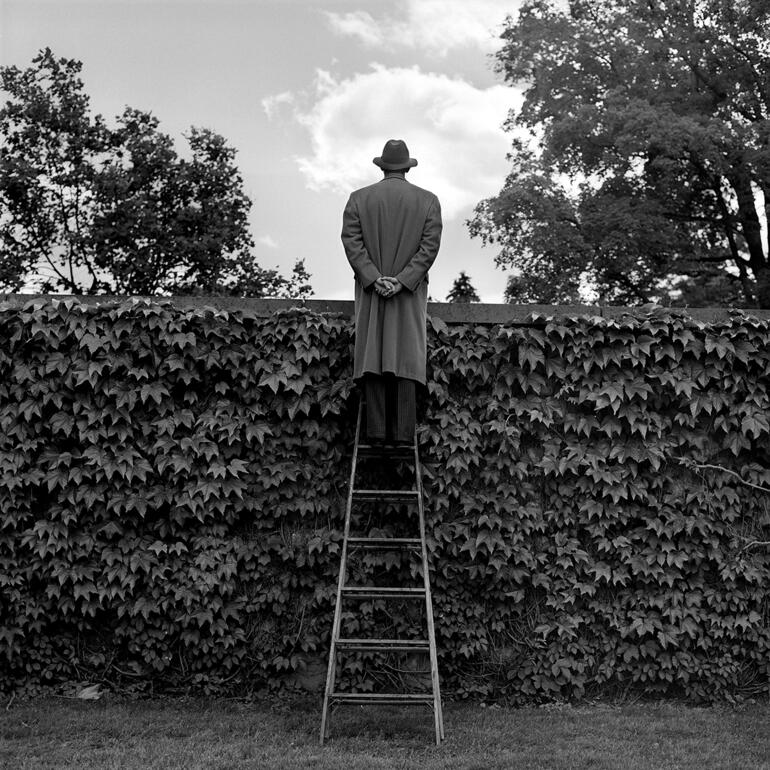