After gaining confidence in his photographic skills, he left his welding job to dedicate himself completely to photography, shooting birthday parties, weddings and graduation ceremonies to make a living. Several years later Cañibano was walking through the old section of Havana when he discovered the Fototeca de Cuba—the renowned photographic archive of “Old Havana” from the early 20th century to the present—which was exhibiting work by important documentary photographer Alfredo Sarabia (1951-1992). The photographs on display reached deep into Cañibano’s psyche. “This was a huge turning point in my life,” he says. “I decided then and there that this is what I wanted to do: express myself though images.”

Back in the 1990s there were no photography schools or workshops in Cuba, nor was there much art to be found on the island. But the National Library in Havana held a small collection of photography books, and Cañibano and a colleague began making daily trips to discover the work of some of the medium’s great masters: Josef Koudelka, Sebastião Salgado and Robert Frank, among others. He also fell under the spell of surrealistic painters like Salvador Dali and René Magritte.

“I think Surrealism is very poetic,” Cañibano says. “And perhaps for that reason my work has something of a mystical feeling. I also pored over design books to learn composition, but they were rather boring to me, so I learned composition by looking at the paintings at the National Museum of Fine Arts, and looking at photographs of Magnum’s great masters, and watching documentaries.”

This was during the “Special Period” in Cuba, a time of economic crisis due in large measure to the breakup of the Soviet Union on the heels of the Cold War. Supplies of all kinds became harder to acquire in Cuba. It was especially difficult to access photographic materials and equipment. As economic problems increased, Cubans stopped being able to afford having their photographs taken. Inevitably, when Cañibano’s supply of film ran out, he was forced to return to his old job in order to survive.

Around the turn of the Millennium, though, a nascent tourism industry began developing in Cuba. Cañibano started meeting foreign photographers who were often looking to meet with like-minded local photographers. Some would send him photo paper and materials, which helped to revive his photographic endeavors. Bolstered by this encouragement, he began working on his first documentary series. He titled it Tierra Guajira, with translates roughly to “The Cuban Countryside.”

Cañibano has always been attracted to what he terms the nobility of the Cuban peasant class. “I love the way their modest way of life contrasts with the beauty of their country landscape,” he says. “In 1998 I armed myself with my camera and backpack, and with a fellow photographer friend we traveled to various rural locations on the island. Sometimes we would go to a peasant’s house asking for water, and would end up sleeping outside in a hammock. I’m a shy person and never take photographs on the first day. Instead, I tried to create confidence with them until we were invited into their houses and could photograph their lives more intimately. Once I drank almost a bucket of water trying to win over a family I met in a small village, but I think it was worth it. Today, I still have great friendship with many of them, and they appreciate my efforts to document their lives, as if we were one big family.”

Cañibano soon discovered that he liked working on larger projects to express his vision. In addition to producing essays documenting life in Havana and in the countryside, he has also created works about religion, aging and whatever else catches his attention. “What is interesting to me about this type of photography, and what makes it so special to me, is that is it unrepeatable,” he says. “You have a fraction of a second to express the essence of what is happening, to tell a story using the camera, light and shapes as tools. You have only an instant to click your shutter, which will hopefully transmit those same sensations I feel to the viewer.”

Cañibano’s photography is rooted in an anthropological perspective. He is documenting a way of life that he believes will soon vanish, as Cuba becomes more modern and venerable traditions become lost to posterity. But he avoids making didactic images, and hopes that viewers will interpret his work from their own individual perspectives. That, he believes, is what art is about.

“I don’t like to emphasize a single element in my photos. When I observe an interesting subject I like to follow them and wait for another element to enter the frame. That allows me to create several stories within a single photograph. Digital photography has obviously simplified the process, because I can see instantly if I have captured anything of value. But having spent so many years doing analog photography, and with the severe lack of materials in Cuba, I learned to not waste precious film. That was a good training, which allows me to shoot more precisely when I see something that really interests me.”

Cañibano’s social and cultural interests run broad and deep. For his documentary series on his hometown of Havana, his motivation is simply life itself. “I love walking through the streets of Havana and taking pictures,” he says. “My series Ciudad (City) started with my constant unrest/restlessness. I’m not sure it is my best work because it’s a bit scattered. But I love looking at the lives of the people living here, and try to make images depicting the human condition. We are all just trying to do our best, and this can often yield results that are humorous or profound.”

His current home life yielded yet another series of photographs. He and his wife, Lisette, have been living for a long time with an elderly person in their house. Cañibano has watched the degenerative decline caused by aging.
“Sometimes people stay healthy for their entire lives,” he says. “I’ve met 90-year olds who can still swim every day. But often the degenerative processes are more violent. I want to focus my camera on this duality. I walk the streets, I go to peoples’ homes, and I’m constantly looking for elderly people in different situations, because I want to illustrate the entire spectrum of possibilities inherent in aging.”

Cañibano is perhaps unique in that he likes to work on a number of series at once, always ready to jump from one to another when the opportunity presents itself. In 2001 he began photographing transvestites in Havana, and, as with all of his series, returns to it often. “I don’t like to close out my essays,” he says. These are works in progress that I enrich as my perspective changes. It is a way of documenting experiences, customs and traditions that may be lost or transformed over the years.

“Sometimes people ask me, ‘How do you do this work which is often so intimate?’ And I answer: ‘I don’t think much when I’m taking a picture.’ When I’m photographing I am more concerned with other important things: lighting, setting and combining unrelated elements into a good composition. It’s very hard for me to put my photography into words. Sometimes I simply feel that something works, and I click the shutter almost without thinking about it.”

Cañibano’s modest assessment of his approach belies the complex and sophisticated visual organization he captures in each frame of exposed film. His Surrealist impulses come to the fore in images that bring seemingly unrelated elements into harmonious, if mysterious, accord. In “Viñales, 2006” a man’s head juts dominantly into the visual space on the left; the man on the right is about to bring down an axe with force on something unseen; a horse placidly grazes in the middle distance. The tableaux resists logical interpretation, yet is imbued with a slightly ominous atmosphere despite the glaring sunlight.

Cañibano often plays similarly with scale by contrasting a subject close to the camera with figures in the distance, thereby suggesting pictorial and thematic affinities and tensions. Notable examples include the photograph of a young boy tensely facing the camera in extreme foreground while his peers casually hang out on a seawall in the background. Another image (“Havana, 1998”) situates three men in spatial isolation from each other, yet, through a remarkable application of chiaroscuro and visual balance, somehow makes them seem linked in a metaphysical sense. Here, one feels a certain magic realism redolent of the novelist Gabriel García Márquez. Cañibano’s imagery keeps viewers off guard yet wholly engaged in trying to decipher its subterranean currents.

No less profound are images that reveal a puckish sense of humor, like the one that opens this portfolio of a man exercising on a low wall in the middle distance while on the promenade below him a small dog seems to mimic him with its own mysterious workout. It’s a funny, odd and endearing image that would do Elliott Erwitt proud.

Taken as a whole, Cañibano’s body of work embraces humor, joy, sadness, celebration, anguish. In other words, the complete spectrum of the human condition. His work parallels the likes of Cristina Garcia Rodero, Manuel Alvarez Bravo and Henri Cartier-Bresson—and makes a strong case to be considered on the same level.

His photography also offers a welcome respite from the huge volume of tourist photographs of Cuba, mostly shot in Havana, that for many people forms their contemporary impression of the country. Cañibano presents an alternate vision: an authentic insider view of urban and rural life that captures a vibrant and organic sense of the collective Cuban character.

Through his sensitivity, talent and dedication, Cañibano has transformed himself from relative obscurity to the front rank of emerging Cuban photographers. His work has been seen and published around the world, and he can now, to his great surprise, comfortably support himself exclusively by producing photographs.

“When I go out shooting, I see history,” he says. “Our country is changing rapidly, and the countryside is no stranger to any of these changes. I feel like this whole process must be photographed. What I like about photography is how it allows for the coexistence of several views of the same subject. Your point of view can completely change the essence of a photograph, and what it says. I still have much to learn about Cuba. Although on many occasions I am classified as an artist, I do not like the term, and I don’t see myself that way. I am a photographer!” 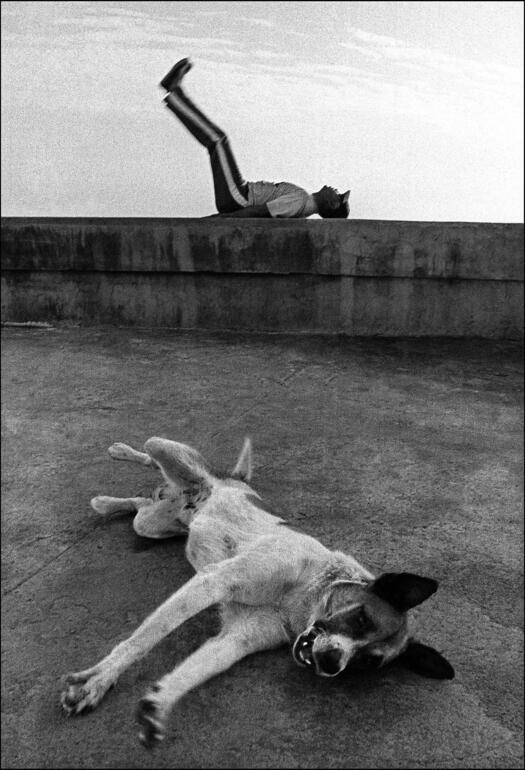