Some years ago, Philipp Rittermann had a recurring dream: Camera in hand, he traveled weightlessly through vivid landscapes in a state of exhilaration. The images he captured were like nothing he’d seen before. They were in 3-D, with continuous, running time inside each frame. Knowing he was dreaming, he grabbed a handful of exposed film, hoping to bring it back to the tangible world: He invariably awoke with his hand clenched.

The dream is relevant to the way Rittermann has thought about and made photographs ever since. In 2001 Rittermann’s mid-career museum retrospective and catalog, Navigating by Light (at the Museum of Photographic Arts, San Diego), included numerous multi-paneled panoramas. They were his most complex work to date.

To make the images, he hand-held his camera, pivoting it 360 degrees on a fixed horizon, making exposures every few seconds, anticipating what was about to happen in each frame. Shot on film, scanned, then digitally printed, the panoramas were an attempt to expand temporality, the essence of photography, and merged the broad spectacle with the personal moment all at once. Like the unfurling of a scroll, the final prints consisted of seven to 15 frames pieced together, each separated by a seam. When assembled, the frames created a panoramic view “so wide,” the photographer said, “they extended beyond what we can physically see with our own eyes.”

Yet the images remained fragmented, disrupted by the seams. As digital technology has become more sophisticated in the past 10 years, so has Rittermann’s technique. Now, each digital frame (he no longer uses film) is captured as before by panning across his subject; the images are then stitched together into a seamless chronology in postproduction. Moreover, they can be built vertically as well as horizontally, with high “bit-depth” maintaining rich tonalities, which enhance dimensionality. Every event the photographer records — a boat gliding under a bridge, a moped zooming past, the movement of a construction crane — is truthful to what was there, just not all in a single instant. The photographs layer multiple moments, generating a highly complex portrait of a place. Time becomes fluid.

Rittermann’s method is not unlike those of Jeff Wall and Gregory Crewdson, who build single photographs from multiple exposures. Unlike them, however, Rittermann works in the real, erratic world. (Wall and Crewdson stage their scenes.) Making images in the unpredictable environment of China ups the ante. As does the use of the panorama format, which covers a wider range of vision than a single frame and demands exponentially more compelling information throughout.

Rittermann is the product of a unique background: Born in Lima to German parents, his family left Peru for Germany when Rittermann was 14. He has never escaped the influence of either country. As a child, he was a blonde, Spanish-speaking boy who never fully fit into Lima’s neighborhoods. He felt equally out of place when he arrived in Munich as a teenager. These formative experiences helped make him a self-declared exile, one sensitive to differences.

Rittermann feels at home everywhere and nowhere, and alleviates his sense of otherness through travel and experiencing other cultures. His Latin American-German origins generate a rare, sometimes warring blend of empathy and reserve. He is disciplined and intellectually persistent, yet the Latin side of him softens this efficiency, countering logic with a carefully impassioned response to the world. The result is that Rittermann’s photographs are impeccably produced, with their factuality cloaked in a generous poetry.

Martin Weigel, a noted thinker on technology and creativity, wrote that at the heart of every new idea “is a rearrangement of the same materials. Invention arises from the constructive assimilation of pre-existing elements into new syntheses, a new combination of prior art.”

Rittermann’s series “Emperor’s River: Photographing Along China’s Grand Canal,” arises out of a synthesis of his prior work now fully realized through the extraordinary advances made in digital technology. His iconic black-and-white photographs from the 1980s and ’90s are products of two compelling aesthetic pursuits: night scenes of urban industrialized spaces in the United States and Germany; and the remote, sun-drenched deserts of California, the U.S. Southwest and Mexico.

Combined opposites of industry and nature, their vastness and solitude, and the passage of time are essential to the photographer’s visual vocabulary. His predilection for industry and night came, perhaps, from Germany’s northern culture and climate; his affinities for natural landscapes are the product of Peru’s raw and dramatically diverse high deserts and jungles that the photographer explored fully as a child. He applies these past themes to the Orwellian saga that is China. The People’s Republic, however, scrambles all distinctions between these opposites.

The dawn of the 21st century brought unprecedented economic change on a global scale, with China at its heart. Several historians assert that ever since the humiliating enslavement of their population through British-imported opium in the 19th century, the Chinese have sought to restore their country. China’s current economic dominance as the producer of the world’s consumer goods is that reclamation; some say its revenge. With his interest in the built environment, and the way people and the planet are transformed by it, Rittermann traveled to China first as an invited artist, and then on a subsequent trip in pursuit of the Grand Canal.

Varying, contemporary media have, for years, dissected China’s rise. Economic analysts regularly relay mind-numbing statistics about the largest human migration in history—from China’s rural areas to its cities—fueling the country’s GDP. Writer-radio commentator Rob Gifford, who lives in China, describes the colorful people he meets from the western outback of Urumqi to the eastern metropolis of Shanghai. Beginning in 2002, photographer Edward Burtynsky recorded the building of the vast Three Gorges Dam so that we could begin to comprehend the shift of the earth’s axis that the dam reportedly caused.

Contributing to this reportage are Philipp Rittermann’s panoramas, which accomplish something the others do not: Visually, they conflate industrial scale with human scale. We see China’s enormous industry and daily life from street level. Through Rittermann’s lens, placed shoulder-to-shoulder with the Chinese, we are literally on the street looking out, up and across vast, flat vistas and down into canals and fish markets or straight into hutongs surrounded by unparalleled vertical construction and human movement. The images encircle and excavate architectural ruins that seem to rise and fall in unison. Europe’s Romantic notion of the sacred ruin has no hold in China.

“To be ruin-less is to have a kind of amnesia. The result of mobility,” writes Rebecca Solnit. “People who constantly move are constantly arriving at landscapes that do not hold their past.” China is in a state of forgetting, of re-imagining itself as if painting over an old canvas. In the state’s manmade rearrangement of bricks, roads and terrain, it reorganizes its own history and the trajectory of people’s lives. Rittermann’s panoramic technique briefly reclaims and reassembles these forces in mosaics of time.

Unlike his work in Navigating by Light, Rittermann’s China series hovers closer to document than aesthetic object. It lays bare a kind of primal circuitry on the ground and in the Chinese psyche. We wonder at the views the photographer shows us. Some are confounding: A vegetable garden encroaches upon a major traffic route; a woman at work on her barge walks a gangplank in stilettos; a man relaxes after work in a lawn chair with four cooling towers and a recycling plant for his front yard. Rittermann sweeps up and displays these juxtapositions and pleasurable absurdities. The photographer both appreciates and is stunned by his subjects’ command of the expansive. Yet, there is a parallel between his panoramas and China’s growth. Both are piecing a world out of fragments on a grand scale.

Through this palpability and scale, an aesthetic is at play. As the pictures unfurl horizontally, they weave a web of line, light and action across their surfaces. These act as aesthetic grounders in an otherwise chaotic Chinese terrain. The lines take the form of vertical apartment towers, elevated railways, window grids, street signs, light posts, converging alleyways, bridges, canals, gangways, loaded barges and ubiquitous overhead electrical wires (smaller neighborhoods poach electricity from main grids, creating a riot of hanging cable) — lending a frenzied lyrical structure to the urban clutter.

In one image, a long line of coal-laden barges slowly floats past an embankment of poplars at night; the boats and trees measure out a pleasing rhythm of vertical and horizontal lines. Since we are given the length of the barges but no destination at either end of the image, their passage feels neither like leave-taking nor arrival but simply the notion of duration, China’s trump card.

Oddly, a number of the photographs include no people. Under a massive construction site of an elevated high-speed rail, workers are nowhere to be seen; soaring apartment complexes stand empty; a lone figure crosses a bridge in Shanghai, one of the busiest cities in the world; a dazzling new plaza is bereft of strollers. Where are all the people these structures were built for? What dominates are near-empty urbanscapes that reinforce the isolation of people who seem in the act of entering a bleak future — bleak because it is anticipated in the silent emptiness of the present. The disparate parts of the city do not feel integrated, necessary or occupied. Urban planning has gone awry. The cities and their denizens feel marooned by the powerful changes imposed on them. This is not Rittermann’s intent. However, for this viewer, the photographer’s genuine curiosity includes a muted critique of the subject he faces: a ravenous industrialization that diminishes people and erases the land beneath them on a scale beyond what he encountered in Europe or the U.S.

Rittermann’s return to night imagery, where shadows dramatize and give weight and depth to his subjects, makes us look at places easily passed over in daylight. He is fascinated by light, by dawn and twilight, by streetlight, by light from windows, light reflected off water, light from welding arcs. His use of it inscribes time and gives added significance to buildings, interiors and people obliquely viewed. His nighttime fish market hums with the activity of young workers and entrepreneurs, wherein the western photographer is barely acknowledged. While looking on, we, too, feel invisible, momentary visitors to a work site or after-work repast among people who tolerate our presence with silent, formal reserve. Some possess a demeanor that escapes our cultural reading, presenting expressions that are incurious, benign, opaque — born, perhaps, from years under Mao, during which nothing internal ever reached the surface.

The number of bridges, boats, vehicles, roads and, the subject of the series itself, the Grand Canal, speaks to Rittermann’s fascination with passage. This materiality of movement becomes a literal manifestation of our collective, symbolic human journey. Accelerated passage and progress are the means by which this particular culture, and subsequently the world, plunges headlong into the future. Rittermann wants to arrest it, at least for a photographic moment, to reflect on its ramifications. Entering his images allows us to get our bearings. As we voyage out of one century into another, Rittermann offers his photographs as lyrical topographical maps with which to chart the course of a brave new world. 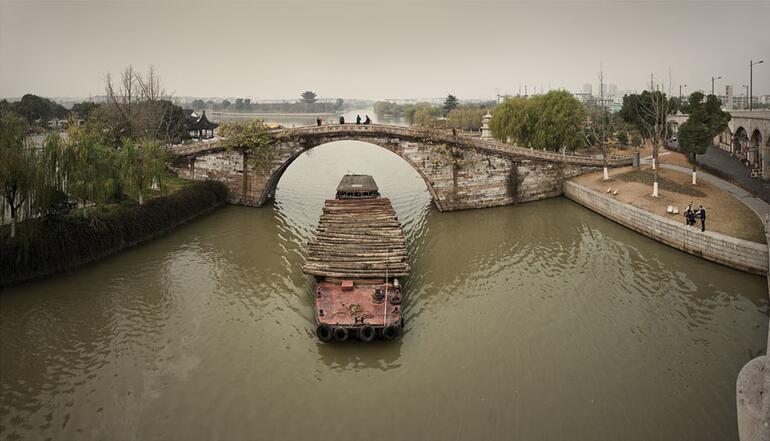