The 20 century’s second decade was saturated with a cultural edge inherited from post-World War I prosperity. Though it took 13 days to travel from New York to California and man’s life expectancy was only 53.6 years, indoor plumbing and electricity suddenly made everything more tolerable. Charles Lindbergh flew solo across the Atlantic, and radio became the first mass broadcast medium. Flappers defied conventional manners, and raucous speakeasies thrived despite prohibition. Pablo Picasso rattled a Cubist perspective into a flat dimension, and Hemingway wrote about this “lost generation.” The stock market crash and the Great Depression loomed large on the horizon. Women’s rights simmered across the nation. And Albert Einstein’s genius proved that gravity and motion can affect time and space.

As a schoolboy Orval Hixon wanted to become a painter, but due to his color-blindness was steered towards a career in photography. This visual deficit became one of Hixon’s greatest attributes; he saw light differently. He worked as a printer’s apprentice and newspaper photographer before accepting a job as a technician at the Studebaker Studios in Kansas City. In 1914, partnered with Alice M. Knight, he opened the Hixon-Knight Studio that specialized in children’s portraiture.

Business in Kansas City (“The Paris of the Plains”) was robust and competitive among several successful photography studios. There was a creative common spirit that was heavily influenced by the aesthetics of the Arts and Crafts movement. In particular, the portrait work of Homer Peyton, of the local Strauss-Peyton Studio, caught Hixon’s attention. Peyton had a singular reputation for using unique backgrounds that were retouched directly onto glass-plate negatives. Thoroughly inspired, Hixon enrolled in graphic art courses at the Kansas City Art Institute and learned a valuable array of graphic techniques that enabled him to retouch and reimagine the negatives—scratching, sketching, rubbing, dissolving, eliminating and marking. This creative freedom elevated Hixon’s distinctive style of portrait lighting, and a mysteriously lyrical photographic vision emerged. The theatrical clients especially loved it:

Without Hixon’s whimsical yet declarative strokes outlining his profile, Eddie Cantor’s portrait would be just a traditional publicity shot. Concert violinist Jan Rubini’s portrait is a heroic marriage of medium; the graphite illustration style awakens a photographic realism. Hixon uses a circular spotlight on jazz dancer Sammy Baird’s face as an Art Deco gesture; the circle of light anchors the pose without neglecting her movement or grace. Actress Vera Beresford projects an innocent modern charm; the folds of a white cotton blouse define the boundaries of a neutral-gray sensibility and sensuality.

Hixon joined business efforts in 1916 with James Connelly, a former vaudevillian himself, to form the Main Street Studio. They shared a similar aesthetic and philosophy about portraiture as “a medium perfectly suited to evoke a sense of magic and heightened theatricality.” Connelly had a vast network of connections in entertainment circles, and Hixon was able to make hay from that opportunity. By 1917, Hixon had published publicity portraits of Valeska Suratt, an actress who wore expensive high fashion costumes onstage; and Ruth St. Denis, a highly regarded modern dance pioneer.

Like most photographers of this time period, Hixon formulated and prepared the darkroom chemistry, coated the glass plates and made the contact prints. More important, Hixon was a master of theatrical light. Often backed up against the wall with his 11×14 Century camera, Hixon’s studio was equipped with stage lights that produced hard, dramatic contrasts of highlights and darkness. Hixon capitalized on this theatricality, and many of these images can easily be mistaken for production stills shot on the theater stage. He was a persuasive storyteller who could always find a solution for incorporating unexpected props and wardrobe into a photograph. Hixon’s portraits possess intent of composition, control of subject and intuition of the personality in front of the lens.

The photographs of Russian dancer/actor Theodore Kosloff and Al Jolson breathe with a curious intensity of precision and understanding. Jolson is flawless and convincing. Kosloff, deep and misunderstood, makes a hypnotic connection with the camera. These portraits reveal unshakeable confidence hidden in the darkness and tangible sophistication in the highlights. Totally opposite this posing style is the wonderfully candid portrait of actor George Beban. The uncovered lens reveals an unpretentious character with hat slightly askew, arms akimbo and a haphazard shadow cast on the background.

The Keith-Albee-Orpheum vaudeville circuits conjoined to make Kansas City a crucial railroad hub for the major circuits. The daily influx of visitors and business supported a prosperous theater district. At this time, Hixon rented a downtown studio space in the impressive Brady Building. The Main Street Studio suited the many space requirements essential to his successful portraiture business, and he probably would have been happy to remain there. But, as Hixon explained in a 1971 interview, “the only reason for the change was the Brady Building was being torn down to make way for a new form of entertainment—silent movies.”

Hixon’s portrait and publicity business was booming, but even at the turn of the decade, it was becoming abundantly clear that the vaudeville era was winding down. It would very soon succumb to the emerging dominance of radio, sound films and the inherent financial difficulties of operating vaudeville entertainment across so many miles.

But in its heyday, vaudeville was an exceptionally profitable business. Circuit owners understood the economic benefits of clean, wholesome entertainment. Performers were required to steer clear of any vulgarity or actions that might incite throwing fruit at the stage: “If it didn’t play in Peoria, you weren’t going to make it in vaudeville.” Some performers earned as much as $1,000 per week; some earned even more. There were usually two shows daily, and a complete circuit could last forty weeks. For everyone concerned, it was a lifestyle as much as a business.

There was something for everyone. Consider Clayton “Peg Leg” Bates, a rhythm tap dancer with only one leg; Marshall P. Wilder, a hunchbacked dwarf monologist; Charlie Chaplin; Sammy Davis, Jr.; Rin Tin Tin, a highly trained German shepherd dog; the Singer Midgets, a troupe that acted as some of the munchkins in The Wizard of Oz; comedian Jack Benny; singer Bessie Smith; and Hadji Ali, “The Egyptian Enigma,” famous for astounding acts of controlled regurgitation.

Relocating Hixon’s studio to the impressive Baltimore Hotel, just a few blocks away, was a blessing in disguise. Considered one of the most luxurious buildings west of Chicago, the Baltimore was built entirely of brick, marble and cement shipped from Germany. High society, well-heeled travelers and United States presidents confirmed the hotel’s “grand” attributes. Hixon’s Main Street Studio at the Baltimore now had a welcoming street entrance for anyone who wanted a portrait, even without an appointment. It was a national truism confirming Hixon’s artistry that “nobody left Kansas City without having a session with Orval Hixon.”

An added bonus to this location was the close proximity of approximately twenty vaudeville, burlesque and movie theaters. A ten-foot-wide underground tunnel, nicknamed “Highball Alley,” connected the hotel to theater patrons on the opposite side of the street. The constant traffic of hotel guests, theatergoers and the many vaudevillians working each performance made for a perfect storm of opportunities. Until 1938, when the doors to the Baltimore closed, Hixon photographed hundreds of people who “walked off the street and into my studio. But it was the theatrical folks that were a great source of inspiration.”

The wet-plate negatives Hixon used had an orthochromatic sensitivity to light, and his subjects’ skin tones seemed to glow in front of the camera. Hixon moves with great dexterity among highly costumed sessions, figure studies and extremely cropped portrait compositions. Personalities emerge from depthless pools of darkness or textured backgrounds of gray and white—actor Taylor Holmes scrutinizes the camera with cool disdain, hypnotist Maurice Barrett looks into the future, and barely costumed Janette Hackett (“artistic dancer”) reminds us that Madonna and Lady Gaga are not particularly the original icons of popular culture they pretend to be.

Like many of those who posed for him, Hixon understood the importance of advertising and self-promotion. He waived copyright to his subjects in exchange for photo credit so his pictures could appear in publications. He stamped every print that left the studio. And he used display cases along Baltimore Street and the hotel lobby to exhibit contact prints made from 8×10 and 11×14 glass-plate negatives. A 1980 interview reveals the strategy: “I did a great deal in the way of advertising my studio. In fact, I think I put the largest part of my profits into advertising. I kept in close contact with the newspaper people, used some direct mail, and bought space in programs, and on drop curtains in theaters. I also advertised in streetcars.”

Hixon’s commercial success enabled him to open two additional studios in Liberty, Missouri; and Manhattan, Kansas. But by 1930 vaudeville was finished. Hixon and everyone else knew it. In a prudent decision, he closed the studio in Kansas City and moved to Lawrence, Kansas. Though Hixon’s high-profile period of celebrity work was concluded, he continued taking a variety of portrait assignments and settled into a different lifestyle with his wife and sons.

Orval Hixon’s portraiture provides an essential link in photography’s lineage. Although quietly influential for decades, Hixon’s work is deserving of a thorough reevaluation and appreciation. Thankfully, James Finley (a grand-nephew and photographer himself) has assumed the role of primary archivist and consistent chorus to Hixon’s collection. Together with Hixon’s surviving son, David, the Sundance Photo Gallery in Weston, Missouri was created and has become a clearinghouse for all things Orval Hixon—from digitally produced, sepia-toned prints to vaudeville era memorabilia.

Finley has made hundreds of high-resolution scans directly from the original glass negatives. From the approximately 37,000 original plates, just a few hundred have survived due to damage and economic imperatives to reuse the plates. It is a poignant experience to hold one of these 11×14 glass plates; Hixon’s artistry and dexterity live within them.

Orval Hixon created a remarkable, singular and uninterrupted visual document of an entire decade in American culture. This archive is a testament to his artistry, camaraderie and motivation. Hixon perhaps described it best in one of his last interviews: “When you have two or three photographers working against each other the way it was in the vaudeville days in Kansas City, you work harder. You need that competition.”

Some things never change…and some things will never be the same.

Fact File
To learn more about Hixon and the vaudeville era, or to order prints, visit www.sundancephotogallery.com. 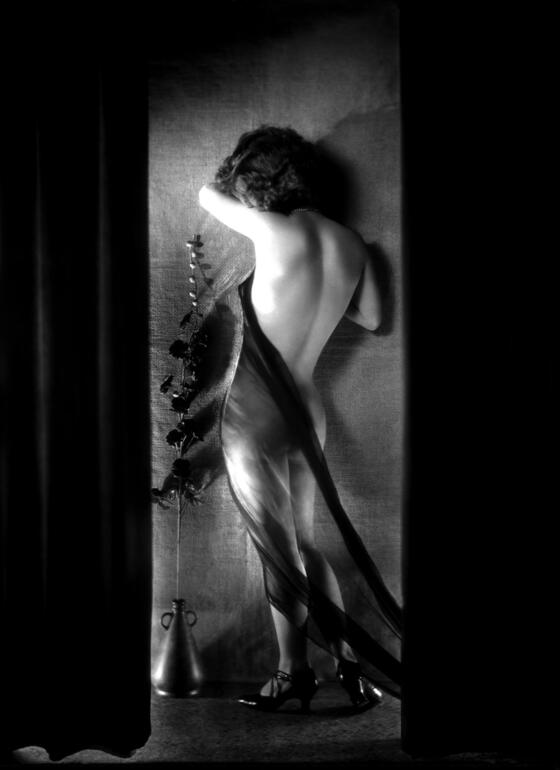