Mitch Dobrowner: Eye of the Storm

Since picking up a camera after a 20-year hiatus, Mitch Dobrowner has done much more than make up for lost time; he’s secured a place for himself in the annals of landscape photography. He shoots, for the most part, in remote locations, and in the case of his dramatic storm pictures, he seeks out, chases and braves weather conditions from which most of us would run. But beyond getting himself to the right place at the right time, Dobrowner brings with him an artist’s passion and a scientist’s understanding—both of what he sees and how the camera sees—as well as a fair amount of blood, sweat and, presumably, joyful tears.

While the uninitiated may mistake him for a Photoshop wizard, Dobrowner assures us that his images are created in-camera with a focus on pre-processing (as opposed to post-processing).

“On my children’s heads,” Dobrowner says with a smile over dinner in Studio City, California, “there’s none of that Photoshopping going on. All my images are composed in camera, and every picture is an expression of what I saw and how I felt while taking it. In fact, before National Geographic would publish my photographs (July 2012), its editors insisted upon comparing my raw files to my TIFFs.”

With that put to rest, we’re left with the amazement felt when first encountering his work. Awe-inspiring, otherworldly, eerie and hyperreal are often used in attempts to describe it. Dobrowner believes that the work of all artists “expresses the essence of their personalities.” His own is as down-to-earth, unassuming and humble as can be. It’s the reverence for his subject matter that connects this photographer to his art. “It’s a privilege to express the way I see our wonderful planet,” he says.

Dobrowner averages four trips a year, ranging from 10 to 14 days each. He works alone on the landscapes, primarily in the Southwest, and with his friend, storm tracker Roger Hill, when chasing massive super-cells across America’s Great Plains. In observing and communing with his subjects (“It usually takes a couple of days on location just to detox from the city”), a personal relationship develops. Opening his laptop, Dobrowner brings up an image of a cluster of rocks photographed in southern Utah. “I don’t know what you see,” he says, “but I see a family. There’s the father, the mother; there’s an uncle over here, and a punkie kid with a Mohawk over here…”

The storms, too, become personified. “I see them as living, breathing eco-systems,” Dobrowner has said in online interviews. “They are born when the conditions are right, and gain strength as they grow. They’re like teenagers: in the beginning they’re violent and a little crazy; you don’t know what’s going to happen. Then they take on a life and an individuality of their own. They fight against their environment to stay alive. Some die quickly, others last for hours, change form as they age, and eventually, they die too. [The storms] take on so many different aspects, faces and personalities.”

While he finds plenty of mystery in planetary and human existence, when it comes to the technical aspects of photography, there isn’t much that Dobrowner doesn’t understand. When he was shooting with film he learned all he could about its material properties, limitations and capabilities.

“I wanted to know how film was made so I wasn’t intimated by it as a photographer. So I took a job in the sensitometry department of a film manufacturer. I was performing R&D with high-contrast Kodalith films, taking acetate, coating it with gelatin and then silver nitrate, developing it, and reading the results on a densitometer.”

Dobrowner approaches digital photography with the same curiosity and need to know. “I don’t want camera manufacturers telling me how to shoot,” he says. “I remove blocking filters so that I can get into ultra-violet and infra-red zones if I want to—depending on the lighting and weather conditions of the landscape I’m photographing.”

He speaks of the sensor’s checkerboard pattern, silicon base, Bayer patterns, the number of photo sites in a pixel (four: one red, one blue and two greens, “because our eyes see more green”), of microns and nanometers—all of which make up the DNA of what he calls good exposures.

“Today, I’m about 95% of where I want to be with my workflow. But that last five percent can take a lifetime to achieve. I’m trying to get there one percent at a time,” he says. “I haven’t shot my best work yet.”

Dobrowner says that he sees in black and white, so his interpretation of a scene happens while he’s shooting. When printing, he follows a digital workflow that includes his own Zone System designed to capture the most information possible from his exposure, along with the usual amount of dodging and burning. His process yields the sharpest pictures imaginable, some printed as large as 34 by 50 inches on an Epson 9900.

“The print represents my final product, so I’m very selective about which images I’ll print big,” he says. “I got so sick of the giant prints you see at Photo L.A. So many are not good pictures—they’re just big. Smaller prints are more intimate. I like having to get right up to a small print.”

Of gallery representation, Dobrowner says that he learned the hard way. “I had too many galleries, too many people representing me, and some didn’t represent me properly. If the dealer doesn’t care about the art; if he or she only cares about the money; if they’re mean or nasty to someone interested in my work…I heard from people that that was sometimes the case, so I had to cut back on the number of galleries I work with. The money is great [his large prints sell for as much as $12,000], but I’m more passionate about someone wanting my picture. I’m astonished and honored when someone pays so much for one of my prints.”

Dobrowner considers the recent avalanche of recognition for his work—three published books, including Storms (Aperture, 2013); multiple gallery exhibitions; and increasingly brisk sales of limited-edition prints—to be in large part a matter of good fortune. “I’m happy that the images are doing the talking. The galleries and publishers have all called me.”

Born and raised in Bethpage, New York, Dobrowner says that by the late 1970s, in his teenage years, he felt lost and often found himself in trouble. His concerned father gave him his first camera, a used Argus rangefinder, “to fool around with.” He became hooked on the medium immediately, and began teaching himself the art and craft of photography. He studied the pictures and Zone System of Ansel Adams, who, along with Minor White, he cites as a major influence. It was their photographs of the Great Southwest that made the deepest impression on Dobrowner’s imagination. He attended the New York Institute of Technology, and assisted in the studios of Pete Turner and Hashi before deciding at 20 to quit his job and leave home—champing at the bit to see the American West for himself.

“I didn’t know what I was doing when I moved to L.A.,” he recalls. “I remember coming over the hill on the 405 Freeway and seeing the San Fernando Valley for the first time…I was blown away. It was like Yosemite to me. That picture stayed in my mind.”

In California Dobrowner met his wife, Wendy, with whom he has three children. They opened a graphic design studio in which she designed and he ran the business, and which put his photography on hold indefinitely. Family comes first for Dobrowner, and it was only with his wife’s and kids’ encouragement that after a 20-year break he began shooting again.

“I was so busy that I couldn’t get away, so I decided to shoot L.A.,” he says. “That photograph of the Valley, “Civilization,” was the first one I made. I was tired of people telling me that L.A. was ugly. I wouldn’t live here if I thought it was ugly. I love this city and I love the way it looks.”

Dobrowner waxes philosophical on photography’s impact on his life: “The whole journey of the print is what fascinates me. I’m thinking of going someplace. I drive or get on a plane, land, go to a hotel or camp at a location. I don’t know what I’m going to find. I see something, I take a picture, look at it, grade it—hey, it looks pretty good. I make a print; I make another one that’s a little better. Eventually a gallery sees it and someone buys it for a lot of money and it’s hanging in their house.

“I’ve met amazing people through photography. It’s allowed me to leave something for my children, grandchildren and great-grandchildren. I don’t even know the names of my great-great-grandfathers—but they lived, just like we do. They probably lived very hard lives, and we wouldn’t be here without them. At the very least, I can leave my great-grandchildren a visual record of what this beautiful planet once looked like.” 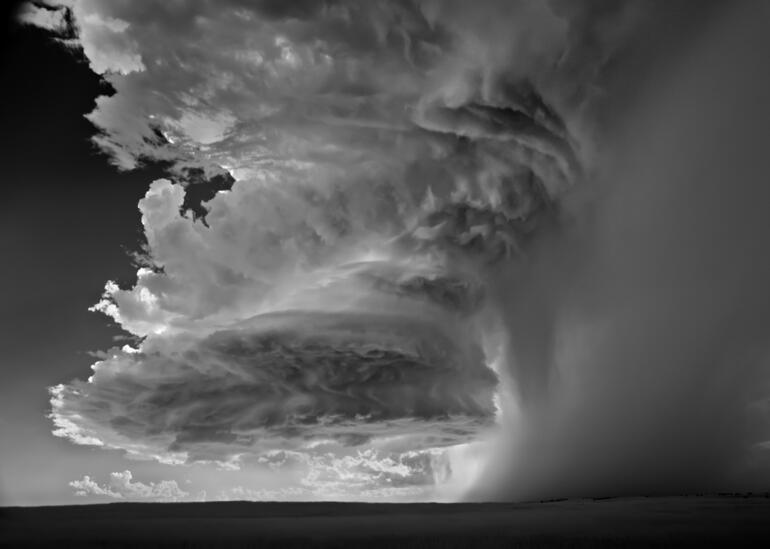