The Veil of Veronica has been kept at Saint Peter’s Basilica in the Vatican since the 8th century. The equally famous Shroud of Turin is believed to have Christ’s entire body imprinted on or in the linen fabric, although authenticity for either relic has not been forensically confirmed. Whether or not an image of Christ’s countenance is imprinted on the cloth, Saint Veronica holds a revered place in biblical legend, offering an intriguing entrée—and metaphor—for street, documentary and numerous subsets of contemporary photography.

Greece, like Italy, stands tall among the world’s most influential civilizations. Ancient Athens was an environment of enormous achievement that made it the envy of the world. New ideas from the minds of Hippocrates, Homer, Plato and other giants permeated world cultures and have influenced science, technology and the arts ever since.

Set against this backdrop of achievement, however, everyday street life in the ancient Greek city-states was chaotic, dangerous, hypnotic—a feast for the senses. Ancient Greek playwrights and poets frequently addressed recurring themes of suffering and death in their art.

Edith Hall sees these themes as a means of elucidating the boundary line between life and death. A Professor at King’s College in London, Hall has published more than 25 books related to all aspects of ancient Greek and Roman history and thought. Her perspectives on “the instrumentality of ancient ideas in world culture” provide insight to the myriad of forces driving Greek society.

This heritage is clearly evident in the creative output of Maria Spyropoulou, a curator of antiquities in Athens, Greece, who has spent the past 25 years photographing the vast theatre of life that reveals itself along the city’s public streets. She had no relationship to photography until the age of 28, but once she began studies at the Technical Education Institute in Athens, “a magical world was revealed that even after these decades still holds a firm fascination.”

For Spyropoulou there is a certain affirmation of Hall’s point of view. “The sum of my cultural background has an impact on my perspective and sense of aesthetics. From the films I have watched, like those of Fellini and Almodovar; to the books I have read, like those of Kafka and García Márquez; they are all here, defining me.”

She prefers the “big cities, markets, busy streets and generally any place to witness people and their trails. The looks, the movements and body postures are the material I need to create my personal work. I choose places where my goal as a photographer is to not refer to any given time or place. I purposefully and meticulously avoid any elements that will give away the sense of where and when. I am interested in the inner place and time of people.”

The photographer travels throughout Greece, Europe, Turkey and the Balkans in quest of “environments that attract me and allow me to realize the images that exist in my mind.” This stylistic point of view allows the viewer to appreciate the abstract essence of the street; it eliminates the fascination that is typically reserved for placing the person into the constructed architectural environment. Spyropoulou’s imagery concentrates on describing the individual’s relationship to the street rather than in illustrating the realism of the situation.

A deeper perspective on her work is informed by understanding the approaches used by the ancient Greeks to idolize the human figure and represent it in heroic forms: as guardians of the masses, exemplars of philosophies to be emulated, harbingers of ambitions to be embraced. The Greeks decorated most every aspect of their lives with beauty in mind—metalwork, pottery and sculpture all focused on depicting an idealized sense of proportion and differentiated Greek life from the rest of the world’s cultures. Likewise, Spyropoulou’s street portraits evoke a deeply rooted sense of the statue, the permanence of the form, even a strong connection to the past as actors on an ancient stage awaiting their cue to begin the performance.

Spyropoulou routinely establishes a sense of space while at the same evoking an inner tableau, as in the image of a dark-haired young woman shot in tight foreground profile being scrutinized by a check-shirted man sitting pensively on a couch in the background. A discomfiting mood permeates the scene, characteristic of much of her work. The woman is a passerby being subjected to the pervasive male gaze, yet she is seemingly unaware of or indifferent to the scrutiny. The pronounced spatial imbalance created by the framing renders her a much larger presence than her voyeur, suggesting perhaps a sense of empowerment as she navigates the (non) encounter.

A different type of side view is on display in the photo of an older woman—an observer perhaps, or simply lost in her own thoughts—in a public seating area, hemmed in by the heavy supporting arms of the chairs on either side of her. Chiaroscuro lighting cuts through the murk to illuminate a timeless hand-on-cheek profile: she may have just sat down or just as easily have been seated there for centuries awaiting her moment to become animated. In whatever interim of time she or we are contemplating, Spyropoulou’s camera makes the woman permanent in time.

In such images does Spyropoulou show us a world of thought, reflection and discomfiture as hallmarks of the street. Her subjects nearly always betray a distinct absence of relaxation and ease; rather, they pay rapt, uneasy attention to the interior personal dramas unfolding within themselves, even amidst the presence of others.

Just as often, they shift that interior gaze outward to confront the photographer. Spyropoulou seems to embrace this challenge and channel it to her advantage.“Street art has been gaining ground in Greece over the past 30 years,” she says, “though people have become perhaps even more suspicious of the ever-present camera pointed in their direction.”

The heightened attentiveness to the camera has made contemporary street photographs something of an anomaly compared to those of earlier decades, whose hallmarks surrounded reactions of surprise, intrusion and blurred movement. This natural reaction by the subject—a permutation of the reflex we come to identify as the gaze—serves to create a relationship, often wary, between subject and viewer.

The gaze represents intent, attention and a willingness to participate in place of distraction or secrecy. Spyropoulou takes the gaze into the realm of conversation between her camera and her subjects. One such exchange takes place with a young girl in a bathing suit, eyes intently fixed on the camera lens, sitting with nonchalance, possessed of an inner personality of confidence and competence. Her bare feet and toes dig ever so slightly into the soft dirt as her blossoming youthfulness reveals itself to the foreground light. Her willingness to silently speak to the lens in this photographic encounter invokes the sensibility of the artist’s model sitting patiently for the sculptor.

“For the classical Greeks, the focus on the face coincided with concepts of harmony, meter and beauty,” Sypropoulou says. “The cultural progress of my country benefited from the advantage it held as a geographical crossroad of cultures from Asia, Europe, even Africa. I am convinced this has instilled a mysterious psyche in my people.”

It has also provided an entry point to a surrealistic interpretation of the world. Juxtapositions serve an integral function in this formula, and Spyropoulou deftly explores this aspect through an understanding of and connection to the past, resulting in unexpected and tantalizing street life visuals.

We see it in her image of a crisp shadow of a man moving in the direction of a religious statue recessed in a block of profound darkness, as columns of light interrupt the narrative. The identical hard light that has created the right half of the composition now serves to reveal the context of the sculpture. The same light creating a shadow now functions to elucidate another portion of the scene. It is dramatic and unexpected, and predicts this story has not reached its conclusion.

Spyropoulou observes a similar back-and-forth movement of light, shadow and environment in photographing the generic female sculpture situated in a “courtyard” of an adjoining apartment building whose rows of windows establish a compositional perspective juxtaposed with circular satellite dishes. From the darkness of the surroundings we confront the silence of an architectural element on the ground at her feet; perhaps it’s a metal grating to cover an electrical vault. It is an unsettling realization as the light disappears around the form. As the sculpture gazes at the lens we question the elements that comprise the scene, only to leave the image with as many questions as we embarked with.

In another startling juxtaposition, a young boy intently directs his gaze out of the corner of the frame while a plaster statue seated behind him seems hypnotized with an even greater intensity. There is a contradiction at play as the young man’s eyes, elusive and shadowed, communicate an emotional absence from the situation. This inanimate object, on the other hand, is imbued with a hint of life, thanks to Spyropoulou’s clever framing and the light hitting her face. The statue’s eyes are transfixed on a portion of the sky beyond the viewer’s understanding. Her outstretched right arm, chest tattoo and bare left breast play tricks with the background clouds so that she appears to both recede from and approach the lens. We are once again in the unfamiliar zone that Spyropoulou so effortlessly conjures, with few visual clues to understand much more than discomfort, suffering and additional enigmas.

If our present circumstances are the result of the sum product of the past’s many opportunities and influences, Maria Spyropoulou’s street images serve to remind us that today is indeed different than yesterday, though the heartbeat of the past millennia can be clearly and unnervingly heard.

Addendum
All photographs copyright Maria Spyropoulou. You can see more of her street photography at spryopoulou.weebly.com and instagram.com/smarof09/. 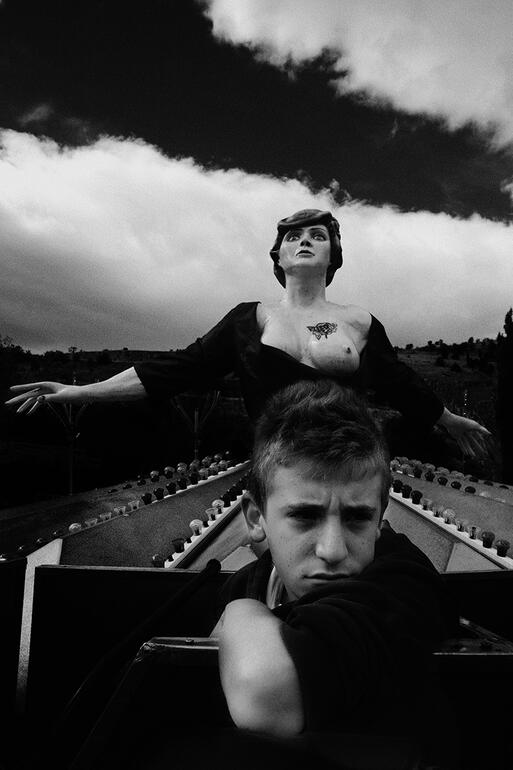