Lewis Morley: Spirit of the Times

This was the London that Lewis Morley’s family repatriated to after spending the war in an internment camp south of Hong Kong. Morley’s English father and Chinese mother had been living in British-controlled Hong Kong when it fell to the Japanese. Upon their release, Morley—fluent in both Cantonese and English, tall and exotically handsome—arrived in postwar London with an open mind and a cross-cultural view of the world.

Although the armed conflict was over, Morley, at the age of 20, was required to join the National Service for two years. According to his retrospective, Lewis Morley: I to Eye (T&G Publishing, 2011), it was in the RAF that he decided to become a painter, and after his discharge in 1947 he enrolled in a commercial arts school. He first took up photography as a drawing aid. However, he soon found that he could make photographs that embraced the Surrealist style that fascinated him. He started out as a street photographer, fascinated by the immediacy of the camera.

He spent a short time studying painting in Paris in 1951-52, returning to London to work as a theater photographer just when the British stage was breaking new ground with plays such as Billy Liar, directed by Lindsay Anderson and starring a young Albert Finney; Baal with Peter O’Toole; Little Malcolm and His Struggle Against the Eunuchs, starring John Hurt; and Loot, written by Joe Orton.

These “kitchen sink” and experimental plays broke away from tame whodunit mysteries, Gilbert and Sullivan operettas and Noel Coward comedies, and brought a new realism to the stage that focused on the working class rather than the upper class. It was gritty and raw, and Morley, with his Surrealist sensibilities, was able to translate its energy by angling his camera to skew any point of reference and make the actors appear as though they were about to fall out of the image. Morley became a master of this visual tension in his straight portraiture, street photography and fashion.

The 1960s introduced a wave of British comedy that eventually gave rise to Monty Python and filtered through to the United States, inspiring American classics such as Saturday Night Live. It was born at the “The Establishment,” a London nightclub founded by Peter Cook and Nicholas Luard, who also helped fund the satirical magazine Private Eye. Cook and fellow comedians Dudley Moore, Alan Bennett and Jonathan Miller had written a series of sketches and called themselves “Beyond the Fringe” in reference to the annual Fringe Theater Festival in Edinburgh. They mocked British society in outrageous sketches such as “Take a Pew,” wherein Alan Bennett plays a vicar giving a Sunday Sermon, and “One Leg Too Few,” in which a one-legged Dudley Moore auditions for the role of Tarzan to a muddled Peter Cook.

The show was a hit in London and New York and forever changed the landscape of comedy. With the rise of television, the format of Beyond the Fringe routines was copied by the BBC, with David Frost (accused by Cook as the “Bubonic Plagiarist”) as the host of television’s That Was the Week that Was.

Morley’s publicity shots of Beyond the Fringe broke with the tradition of shooting inside the theater. He noted, “In Brighton we used the bus depot …the boys clambering in and out of dodgem cars…squatting on the famous breakwater. The photos showed the cast in situations which had nothing whatsoever to do with the show. It’s easy to be clever after the event, but the whole point of filming them in the street was that there was nothing to shoot on stage. It was all words and only twice were the lads in anything but their normal clothes.”

Morley ended up becoming lifelong friends with Cook and Moore, photographing them throughout their lives.

Morley freelanced in fashion as well, shooting for London’s Go! and She magazines. His work in the theater contributed to his style of skewing the balance of the frame, lending his fashion pictures an edge. He shot Jean Shrimpton’s first modeling job, Twiggy before she was a household name, and Charlotte Rampling and Susannah York before they became actresses. (His shots of Shrimpton and Twiggy were in fact the first published photographs of them both.)

Morley placed his models in odd street scenes with random strangers, next to slabs of butchered beef, reflected in a mirror with lipstick words smeared across the surface, or, in the aptly titled “Clothes to be Caught Dead In,” standing before a firing squad. He used angles of bridge girders that slashed across the picture plane, and in others, skewed the horizon to introduce visual tension. Because Morley was an abstract painter, he knew how to infuse energy into a static two-dimensional image. When he made head shots, he photographed from above or below, using shallow depth-of-field to produce an ethereal feel and a sense that the sitter’s head was floating.

There were other great photographers working similar turf at the same time, among them David Bailey, Cecil Beaton and Norman Parkinson, but their tightly composed, high-end compositions for Vogue and Vanity Fair don’t have the accessibility of Morley’s work; their models were elevated to unreachable status. Morley posed his models with children in the background, or being blown about by the wind, or humorously mimicking statuary. He made some of the earliest shots of models leaping in midair.

*In addition to his theater and fashion work, Morley did street photography, covered the music scene and protests against the Vietnam war. He made images of buskers, writers, poets, directors, artists, shopkeepers, sailors, nuns, politicians. Intentionally or not, he captured the gritty exhilaration of Swinging London in the 1960s at street level, where it was happening, when London was rising like a phoenix out of the smoking aftermath of the postwar period.

His most famous image is that of Christine Keeler, taken in 1963 at the height of the Profumo Affair. Although recalled by few people in America, the affair between Keeler, a former model and showgirl, and the British Secretary of State for War, John Profumo, effectively ended the latter’s political career and shocked the nation. Its impact can be compared to the President Clinton-Monica Lewinsky scandal that mushroomed into a government witch hunt. It ended in the suicide of Stephen Ward, Keeler’s friend and protector, who was dragged into the scandal. It is now suspected that Stephen Ward might have been assassinated by MI5, and the case was reopened for investigation in 2014.

The sitting was commissioned by the producers of a film about the affair that never came to fruition. Morley recalled, “During the session, three rolls of 120 film were shot. The first two rolls had Christine sitting in various positions on the chair and on the floor, dressed in a small leather jerkin. It was at this point that the film producers who were in attendance demanded she strip for some nude photos.

“Christine was reluctant to do so, but the producers insisted, saying that it was written in her contract. The situation became rather tense and reached an impasse. I suggested that everyone, including my assistant, leave the studio. I turned my back to Christine, telling her to disrobe, [and] sit back to front on the chair. She was now nude, fulfilling the conditions of the contract, but was at the same time hidden.
“We repeated some of the poses used on the previous two rolls of film. I rapidly exposed some fresh positions, some angled from the side and a few slightly looking down. I felt that I had shot enough and took a couple of paces back. Looking up I saw what appeared to be a perfect positioning. I released the shutter one more time; in fact, it was the last exposure on the roll of film.”

The image became so iconic in Britain that it tended to overshadow Morley’s other photographs—much to his chagrin. He later did a parodic self-portrait with a millstone around his neck to illustrate his feelings. The original chair, an Arne Jacobsen knockoff, now resides in the Victoria and Albert Museum. The style of chair is still called a “Keeler Chair.”

Morley’s tact during the Keeler shoot reflected his sensitivity towards his models as people. Married for nearly 60 years to Patricia Clifford, whom he had met at art school, they were true partners, and his admiration and respect for women is clearly apparent in how he portrayed them and how he responded to Keeler’s discomfort.

Comedian Barry Humphries (aka Dame Edna), a lifelong friend, writes that Morley’s camera “…was an instrument of his compassion and his intellectual curiosity. He was more interested in other people than himself. This, coupled with his intelligence, humor and technical brilliance, has given us a gallery of portraits which is not merely historical document but a poetic chronicle of an exciting age.”

Morley immigrated to Australia in the 1970s, where he continued photographing artists, writers and the theater, shooting the first 33 covers of Belle magazine. In 1989, a major retrospective of his work was mounted at the National Portrait Gallery in London, followed by his autobiography and a nine-page feature in the Observer titled “The Man Who Shot the Sixties.” In 1999, the Royal National Theater in London mounted Caught in the Act, The Theater Photography of Lewis Morley. Until his death in 2013, he enjoyed a number of major retrospectives in Australia, including the landmark Lewis Morley: I to Eye at the National Gallery of Australia.

Toward the end of his life, Morley worried that his archive, which had been meticulously organized and preserved by his friends David Knaus and Arabella Hayes, would be dismantled and auctioned off. Instead, they were able to arrange for its donation to The National Media Museum of Photography, Film and Television in Bradford, UK. The NMM has one of the largest photography collections in the world, including the Royal Photographic Society Collection, which has a vast collection of Henry Fox Talbot’s original prints, negatives and cameras. It’s a fascinating museum and the perfect home for Morley’s archive. (His work is also in the Getty, SF MOMA, LACMA, and other prestigious museums.)

Lewis Morley died on September 3, 2013. Barry Humphries reminisced, “More than any other British photographer, Lewis Morley, it seems to me, has captured the spirit of his time. In the sixties he saw all of us, whether from the world of theater, literature, music or fashion.”

Fact File
Our sincere thanks to The Lewis Morley Archive and The National Media Museum of Photography, Film and Television (nationalmediamuseum.org.uk). 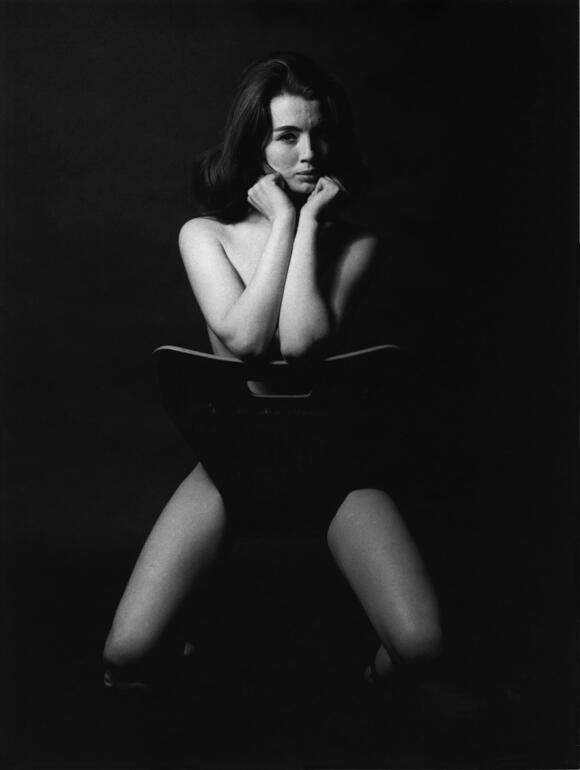