Can a photograph help protect the planet’s most endangered species? That’s a question French photographer Laurent Baheux often asks himself as he travels through remote habitats of east Africa documenting the continent’s most majestic and threatened wildlife.

“I don’t know how photography can help preserve the wild ecosystems, but I am happy when people understand that animals are just as ‘human’ as us, that they have personalities and feel emotions and experience the idea of family,” says Baheux, who admits to some ambivalence regarding the degree to which his work can help raise awareness of the kind of habitat loss and destruction that is the central crisis facing animal survival in the wild.

“It is important to have a conscience about that,” adds Baheux, “and we must open our minds to the fact that we are on a living planet and are just a piece of this wonder. We have to leave more space, more life for all other species, because we will not survive at their extinction. It is our absolute challenge.”

Baheux began his career as a freelance sports photographer, covering top international sports competitions for press photography agencies. His initial visit to Africa in 2002 was a transformative experience that forever changed his career and outlook.

“I first visited Tanzania to take a break from the stresses of modern life and the urban world and to be connected with simple things, to feel nature and wild animals. I did not go with a specific aim or idea about the kind of pictures I would make or what I would do with them. It was just for fun, and I was not disappointed because, in fact, it was the beginning of a beautiful adventure.”
While Baheux records his subjects in ways that capture their beauty and graceful physicality, his primary goal is to record the spirituality of their lives.

“When I take a picture of an animal, I have the same approach as when I photograph people—to try to catch the animal’s unique personality and expressiveness, as well as their strength and sense of freedom,” says Baheux, who has photographed primarily in Tanzania, Kenya, Botswana, Namibia and South Africa.

He shoots primarily with 600mm and 800mm lenses to maintain an unobtrusive distance from his subjects. “I am just a spectator of wildlife, and I photograph what nature wants to show me,” he says. “It is the animal which decides when and where the action is.”

Baheux made a conscious decision to work in black and white as a way to emphasize the more elemental aspects of his subjects.

“Black and white allows me to better capture the magnificence of the animals’ attitudes, the emotion of their looks, and the vividness of these species which are still alive, but more menaced than ever, and the immense richness that they represent for the planet.”

As part of his commitment to wild and endangered species, Baheux supports organizations that work for the protection of nature and the preservation of biodiversity. Since 2013, he has been involved with the United Nations Environmental Program (UNEP), serving as a Goodwill Ambassador. He recently participated in the exhibit, Wild & Precious, organized in collaboration with the GoodPlanet foundation to mark the 40th anniversary of the Convention on International Trade in Endangered Species (CITES).

This past spring, Baheux republished a new edition of his landmark 2012 book, Africa, which features 150 hand-selected images. “I experience great pleasure being in Africa and getting close to these wonderful animals. I photograph by instinct and by feelings, and there is drama in the idea that as a nature photographer, I may be the last witness to the last of a species on the African continent. These animals are fragile and endangered, and nobody really knows how long they will continue to survive in their own environment. Human growth, agriculture and poaching are destroying the last wild areas. My photographs of wild Africa can be seen as one of the last testimonies for all this beauty that is disappearing.”

Please contact the photographer for
print size and price information. 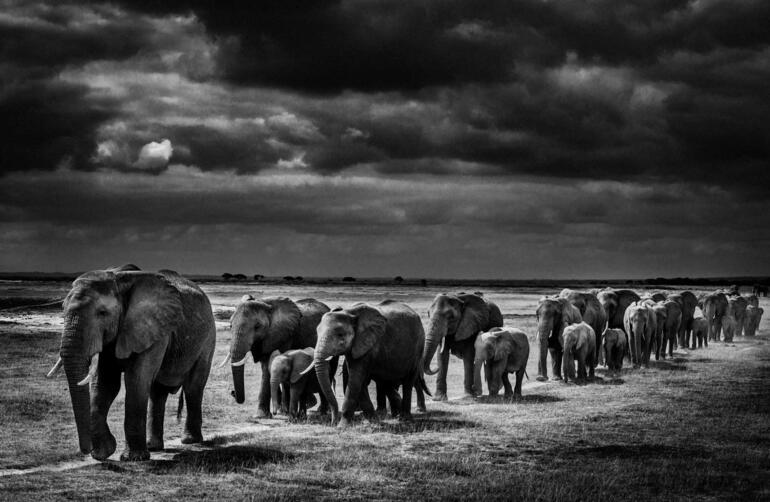