Glen Fishback had befriended Edward Weston sometime in the late 1930s. Weston became the godfather and namesake of Fishback’s first son: Kurt Edward Fishback. Kurt spent his childhood, off and on, at the Weston house on Wildcat Hill in Carmel, watching Edward in his darkroom and feeding his cats. There were 30-something cats that Weston kept, and he would tell his young friend which one had had a litter, which he could pet and which new mothers might claw him.

“He was a very dear, sweet man who used to tell me amazing stories,” Kurt says. “The last time I saw him, with Parkinson’s disease slowly eating away at him, he was shaking uncontrollably, and I watched my dad go outside and, well, he started crying. He couldn’t stand to see a person he idolized so much in such bad shape.”

Kurt was teaching painting, drawing and art history at the College of the Siskiyous in Weed, California when his father asked him to teach at the Glen Fishback School in 1973. When his father passed away in 1976, Kurt started his own commercial studio in Sacramento. Somewhere in this period of time the idea of photographing other visual artists germinated.

“As my photo business grew more successful I decided I needed an outside project to work on. It occurred to me that artists are usually known just by their art. When you looked at a book or magazine you would see photos of the artist’s work, but not of them. I thought it would be interesting to show the person behind the art, and that’s how this project began.

“Bob Arneson had been my mentor in clay back in the 1960s. This was an amazing period of time. People like Arneson were so helpful getting their students into national exhibitions, and he became a really good friend. He still sits on my shoulder as one of my major influences, alongside Edward Weston, Ansel Adams and, of course, my dad.”

Kurt went down to Carmel to talk with Adams after his father died, and they discussed the zone system and other matters photographic. “Ansel told me the most beautiful axiom I’ve ever run into. The Zone System was a bone of contention back then, and some of my father’s students would blow raspberries at Adams. Ansel put his hand up during our talk and said, ‘Follow me.’ We went to the back of his house and looked out a large picture window. He pointed to a low-hanging tree. We looked into the shadows of that tree. ‘There’s light there.’ That’s all Ansel said. Three simple words. I think about that statement with almost every exposure I make.”

When Kurt began to photograph visual artists in their studio environments, he had no idea it would evolve into a lifetime body of work. “I was taught by my father,” he says, “that if you start something, you keep doing it. Of course, I learned from the many artists I photographed that you take an idea, and you dig a well with it. You go deeper and deeper and get as much out of it as you can. That’s where mature art comes from.”

Kurt started by setting up about seven portraits in advance of his first trip to New York City in 1982. He had several introductions from Wayne Thiebaud with photo-realist painters, and he wanted to photograph André Kertész because his father was a big fan.

“I connected with Kertész’s assistant for a sitting, and wound up also doing Chuck Close and Robert Mapplethorpe and George Tice, and a bunch of really amazing people. Art Kane was the only person reluctant to pose, so I dropped off some samples at his studio. Once he saw them, he called and said, ‘Please come and photograph me.’ Then he gave me more names. Everybody gave me names of their friends, and I ended up doing as many as four portraits in a day in the two weeks I was there, for a total of 44.” To date he has made over 300 environmental portraits of some of the most important and famous artists of our time.

“My father taught me to shoot until I was done, and not to overshoot. Of course, now people take hundreds of exposures on digital cameras, but I was working with film. I had been taught exposure, so I didn’t have to bracket, and there wasn’t a ton of film for me to develop. Busy people appreciate that I don’t come in and waste a lot of their time.

“I believe you have to like people to photograph them well. I’m not like Yousuf Karsh, grabbing the cigar out of Churchill’s mouth to piss him off and supposedly show who he really is. I don’t tell people to smile, I don’t pose them and I don’t tell them to look one way or the other. I figure out the environment that I want to put them in, set the camera on a tripod, get my composition, then put a chair out for them to sit on. I say, ‘Please sit,’ and let them get comfortable and participate in the photograph we are making together.”

André Kertész employed a woman who was his curator and go-between with the public, protecting him from unwanted visitors. When she saw what Kurt wanted to do, she arranged a meeting. Kurt made seven exposures. The first four were of Kertész on his balcony overlooking Washington Square. Kertész had done a book for Polaroid of photographs of Washington Square with an SX-70 camera, so this was a natural place to photograph him. Then Kurt photographed him inside, sitting in front of his Mission-style bookshelf with all the spines of the art books and photography books that he loved. “This told me volumes about him,” Kurt remembers. “Three more exposures, and I was finished. He said to me, ‘Oh, my God. A photographer that knows what he’s doing!’ He was 92 at the time and was pissed off at a Life magazine photographer who had shot roll after roll of 35mm. Kertész said, ‘I had to kick him out of my studio because he didn’t know what the hell he was doing.’”

Glen Fishback had produced advertisement photographs for Kodak, Ansco, Rolleiflex and Pentax. “My sister and I were his models,” says Kurt. “We grew up as the poster children for Kodak film. Whenever we went on vacation my dad would do advertising kinds of images: tossing the ball at the beach, or me helping my sister out of a boat. In the 1950s these posters wound up in camera stores all over the United States, to advertise Kodak film and various camera brands. So basically I have a lot of empathy for people who have to pose long periods for photographs.”

Barbara Morgan lived in Scarsdale, outside of New York City, and she picked Kurt and his wife up at the train station in her VW bug. “She drove like a New York cab driver,” Kurt remembers. “She took me and my wife to her studio, the same room where she had made her famous images of Martha Graham. She was 82 years old, and the most important thing to her was to be sure she had ice cream and cookies handy for her grandchildren when they visited. Her archives where there; something like 20 file cabinets full of a lifetime of large-format negatives. She was also anti-nuclear. She railed on and on about it. She wanted to be sure there would be a world for her grandchildren to grow up in.”

Peter Stackpole was one of the first four photographers hired by Life magazine. Kurt’s father had admired Stackpole’s work, so Kurt had heard his name mentioned frequently when growing up. Stackpole famously documented Hollywood movie stars and the building of the Golden Gate Bridge for Life, along with many other assignments.

“That began a very special relationship,” Kurt says. “I loved Peter. After our first portrait session he invited me to see his work; portraits of Marlene Dietrich, Shirley Temple, W.C Fields and the Marx brothers. In my portrait of him I think he looks like a German innkeeper. Later on I took him a print. I always gave everybody that posed for me a print, because I figured they deserved something for their willingness to pose. I gave Peter a 16×20 mounted print, and he said, ‘Oh, my gosh. You’re giving me such a big print. I’ll have to give you two of mine!’”

Kurt photographed Brett Weston three times. When he arrived for one session Weston met him outside and showed off his new Volkswagen van for camping and his magnificent silver Porsche. “He was willing to pose, but he was never fully present,” says Kurt. “He would be there, but it was more like, ‘Okay, let me know when you are done.’ The prints behind Brett, in my portrait of him, are nudes. He had built a special pool with a window under water level, allowing him to photograph nude women swimming. The nudes are special because they combine the flowing lines of water with the bodies of his models.

“I photographed all of the Weston brothers: Chandler, Brett, Neil and Cole. I had met Cole Weston’s girlfriend, one of his nude models, and she invited my wife and me to dinner. It was an amazing night. You sit there listening to the Weston ego, and their attitudes towards women, and the stories!

“Charis Wilson, who was the famous nude model and wife of Edward Weston, was one of my favorite portrait sittings. We had dinner one night and she told stories about driving across the United States with Edward. She drove while Edward slept, and when she saw something that looked like a ‘Weston photograph’ she’d stop, and he’d get out of the car and set up his view camera. He was illustrating Walt Whitman’s Leaves of Grass on a Guggenheim grant, or something like that. She told me about him crouching under motel tables with blankets over them, loading film holders every night.

“Edward Weston always acted like a sweet grandfather to me,” Kurt recalls. “Like he loved me. The last day I saw him was so poignant because he got ahold of my hand—he was shaking uncontrollably—and he just squeezed my hand and stared at me for a very long time. It scared me at the time, but I realized later he was trying to communicate with me, and he couldn’t. It’s a memory I hang onto because of his uncompromising desire for quality and for authenticity and honesty in everything that he photographed. That’s been a lifelong inspiration to me.”

Addendum
Explore more of Kurt Fishback’s portraiture, as well as his landscapes, nudes, street photographs, drawings and sculpture, at fishbackphotography.com. His work is held in more than 150 public and private collections internationally. He is currently represented by the Scott Nichols Gallery in San Francisco, CA. 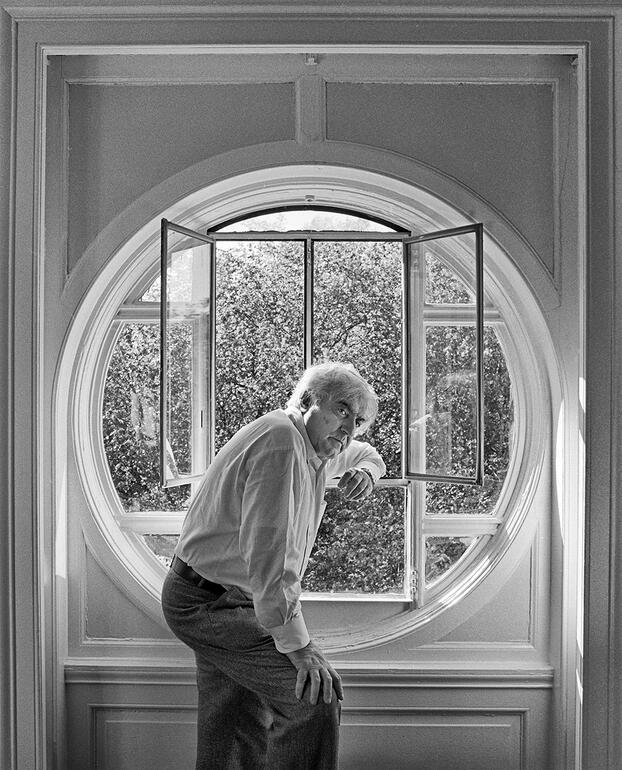