Karin Rosenthal’s earnest engagement with the figure began in the 1970s. People were more at ease with nudity, their own and others, and with participating in photographic projects concentrated on the human form. A community of models grew around her; friends, then friends of friends, posed for her. In the past twenty years she’s found it harder to recruit collaborators, even though her extensive portfolio demonstrates more abstraction than exploitation, more puzzles than titillation. There’s a game afoot in these images, and the artist delights in her role.

The long, productive arc of her work began on a hiking trip. She observed one of her companions sitting in front of rocks after taking a swim, and saw how effortlessly his bare back related to the wall of rock beside him. Her recent piece “Paradox” harkens back to that discovery; note how perception of a very straightforward subject is complicated by the interactions of dappled light and fleshy contour.

Subsequent to that revelation, Rosenthal acknowledged to herself that, as she puts it, “there’s something so right with nudity.” Or, as she elaborates, there’s a significant difference between bathing nude and posing nude.

A major turning point in her work transpired in 1978 in the form of a travel fellowship awarded to Wellesley College alumnae. The funding took her to Crete, where she lived for a winter. She lingered in the mountainous region of the island, making portraits and closely observing locations where the cliffs drop into the ocean, an effect she likens to “giant birds gliding into water.”

That observation proved prophetic. Months later, those meeting places “popped into my nudes unconsciously. Body and landscape have been fused in my nudes ever since.” The motif is apparent in the images “Vortex” and “Source” here, and throughout her extensive body of work.

She returned to the Greek islands twice to continue developing her fluency with the sun’s impressions. A nuanced appreciation of light is a central factor in Rosenthal’s photography. Specifically, how sunlight and water interact with each other, flow around her models and loan their effects to the photographer’s visual vocabulary. She learned, during this fecund, early 1980s period of her career, “a way of working with an observed alchemy of light, water and body that was repeatable.” Over time, she has discovered increasing levels of nuance and spiritual/emotional resonance in these interactions.

The Wellesley fellowship gave her the freedom to try new things. She had time, she said, “to fail as well as succeed.” After many unsuccessful approaches she learned how to “harness” sunlight by adjusting her camera placement so as to situate the sun’s reflection behind forms, thereby producing a glowing aura. She could also use the sun to outline body shapes in white, which she describes as “a natural, direct solarization.” And she became aware of certain miraculous transformations effected by sunlight, shadow and reflection, playing out on forms meeting the water like the mountains on Crete.

Unsurprisingly, she finds little inspiration in contemporary nude figure photography, which she sees as being more sexual than sensual, more preoccupied with commercial concerns and “come on” poses. Art historian Kenneth Clark’s discourse on the topic is illustrative. Nudity, Clark observes in his 1956 book The Nude: A Study in Ideal Form, is balanced and confident, whereas nakedness is deprivation, the disrobed figure being defenseless. To be naked is to be seen nude. “When sensual pleasure becomes obscured by sexual pleasure,” he writes, “the nude becomes the naked and often the profane.” Rosenthal isn’t merely drawing attention to naked people; she’s asking us to consider the innate beauty of natural forms relating to each other.

One factor complicating her work with models is the location of sites for the session. The particular conditions that are most auspicious for her photographs—open light, shallows, calm water, rocks—and her favorite locations near her New England stomping grounds are not always easily accessible. (She recently discovered that, much to her dismay, the Forest Service appears to have intentionally dropped a large tree across the narrow access to one longtime favorite location.)

She has gained some good friends through her work, people who connect easily with her vision. Rosenthal can often look at an image and recall how something personal, specific to the model’s life at the time, arose in that day’s session. Sometimes she will take her own photographs, then make images that cater to the model’s interests. The viewer should note that her models are usually anonymous to us; “Dialogue,” for instance, is atypical in that we have almost a full view of the model’s face.

Her “Fusion Forms”—two of which appear in this selection—reflect a more intentional approach to accomplishing these effects. They are more constructed than discovered. Rosenthal used a view camera on a tripod, multiple exposures and solarization, the typically harsh effects of which she softened by chilling the film. She used Polaroid positive-negative material and employed some carefully considered choreography to build up the images, as in “Fusion Form I.” She photographed indoors, or in overcast lighting, and built her images inspired by a close friend’s wood sculpture. Rosenthal also experimented with the effects enabled by infrared film. “Longing” and “David’s Leg” are marked by the distinctive glow of skin and darkness of sky characteristic of images made with film sensitive to the infrared spectrum of light.

Over time, though, her work has gravitated toward natural effects, the wonders encountered in straightforward observation. Her practice with nudes became more, shall we say, fluid. Water’s optics can play tricks with one’s senses, and she grew fascinated by the challenge of capturing these fleeting recognitions. Rosenthal employs medium-format film for high-quality results; she handholds her camera, having discovered that “every inflection of movement when recording reflections makes a difference.” Using a tripod in such circumstances clearly impedes one’s ability to make spontaneous adjustments.

Her silver prints reiterate her concern for details. During her three trips to Greece, Rosenthal was unable to produce exhibition-quality prints. She had to delay the full realization of the work until she returned to a darkroom, and sometimes that interval might stretch out a bit. Because, as she says, “the final determination of print edges and print interpretation are so important to me, I don’t regard an image as complete until a final print is made.” So, some of the Greek images are dated a year or two after the negative was exposed and developed. These days, she tends to be operating on a more compact timeline, so the dates reflect a print made the same year as the negative.

Rosenthal’s photographs are thoughtful, sensuous, smart and playful. They are irresistibly tactile; you may experience vicarious sensations of water, rock and sun-warmed skin when viewing them. They encompass myriad conceptual notions: a female Narcissus, either embracing or chiding her reflected self (“Dialogue”) in ways that echo conversations we have with ourselves; “Funny Feet,” a quirky bit of vaudeville with a provocative, underlying paradox—how can skin be white and black simultaneously?; in “Suspended,” a reflected sky of pillowy clouds hung amidst a circle of trees, forming a trampoline that buoys a woman whose breasts blend with their surroundings; and a man’s hairy shin intersecting with a grassy dune, the difference between the two almost imperceptible (“David’s Leg”).

Surrealism and visual confusion are never far away from aquatic environments. We encounter water in an outdoor setting that, inexplicably, appears black as ink (“Pods” and “Dimpled Landscape”). Mirrored body fragments form new landscapes. As she says, “I like things not being obvious, provoking thoughts and questions.”

Rosenthal builds her images, they are architectural and corporeal. Furthermore, as her photographs “Paradox,” “Longing,” “Overlap” and others demonstrate, water is not critical to her work; perspective, framing and proximity are equally effective in achieving her results. Our bodies exist in parity with landscape. Flesh, stone, water, light assume equal value. We are, she suggests, one organic whole; we exist “in landscape” as opposed to on the land.

Her visual vocabulary incorporates architectural, corporeal and natural elements in its discourse on life and death. It’s a marvelous and bizarre thing that we are born into this world; Rosenthal has made it her mission to embrace the irrational and mysterious puzzle that existence has given us.

Addendum
All photographs copyright Karin Rosenthal. You can see more of her black-and-white work, as well as her equally accomplished color imagery, at krosenthal.com. 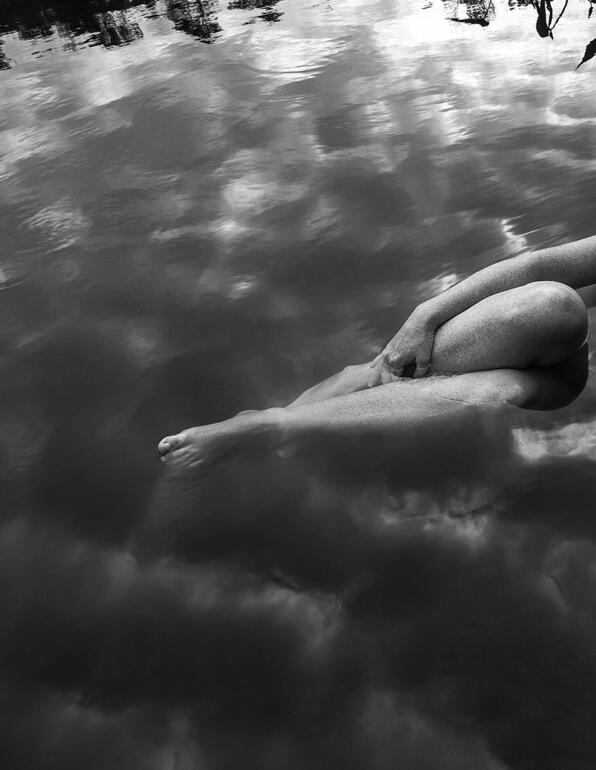