But before the book must come the idea. Many photographers find this a stumbling block, shooting loads of images in hopes of a theme somehow materializing. This has never been a problem for Tenneson, whose ideas derive from a deeply felt internal imperative. “They’ve all been very organic and autobiographical, somehow mirroring what I’ve been going through at that time in my life,” she explains.

Similarly, Tenneson trusts her intuition to tell her when a particular project has run its course. “That’s when I do a book on it,” she states. “It completes the cycle. I recommend to my workshop students that they not sit on projects for ten years. You need to wind them up. It allows you to move on psychologically. It puts closure on a project and a time in your life and it frees you to the unknown, to move forward in your work and in your life. That’s why I’ve always been very book-driven. I love that feeling of completion. I love moving on. One of the most important things in my life is continuing to live and grow. To me Hell would be retirement. Artists never do [retire].”

Tenneson’s thorough concentration on her inner psychological terrain marks her as one of the first photographers to systematically use the medium in such a consistently self-reflective and referential manner. Her work, largely portrait-based, is simultaneously probing, haunting and enigmatic, and transcends traditional notions of what portraiture can be. Even when she’s pointing her camera at others, her work is always about her own ongoing dance with identity.

Her visual signature is equally innovatory in its ethereal tonalities, delicate atmospherics and mythological overtones. Countless photographers have tried to conjure similar effects both thematically and visually, a testament to her pervasive and ongoing influence. In fact, an American Photo poll placed her among the ten most influential women photographers in the history of the medium.

Before Tenneson began publishing books of her own photography, she conceived and edited In/Sights: Self-Portraits of Women (Godine 1978) at a time when many women were making the self-portrait a major part of their output. “It was the 1970s, a time of social upheaval and reevaluation,” she recalls. “I was very much an activist. It was a time when the image of women was changing a lot … this sense of claiming your own identity was very new.”

Tenneson feels that women have more of a tendency toward exploration of the self-portrait than their male counterparts, more acceptance and ease with revealing their inner selves. In/Sights not only tapped the feminist/empowerment zeitgeist of the era, but had a profound impact on the direction of Tenneson’s own work and launched her into a great love of what books can do.

Throughout the 1960s and 1970s her primary focus had been on the self-portrait, but from the early 1980s she concentrated on photographing others. Her first major series, “Transformations,” was begun in 1983, the year she received a grant to work with Polaroid’s 20×24 camera. An image from this series, “Suzanne in Chair,” brought her widespread renown when American Photo ran it on its cover in 1986.

“People went nuts about that picture,” Tenneson recalls. “It presented a different aesthetic, a different feeling. It united spirituality and sensuality and explored the delicate edge where that can exist. That had not been done before. That was a peak moment for me. The book sold out immediately, and I suddenly found myself in demand.”

Tenneson had moved to New York in 1983, and was struggling with her identity at that time. She recalls, “It was very much reflective of my leaving my teaching job at the Corcoran School of Art in Washington for New York, getting divorced, and launching my vulnerable self into a whole new world. I was in my late thirties by then. When I look at those pictures they feel very autobiographical. Beauty and pain all together. Basically my life at the time. People have said, especially when I was younger, that I have an ethereal look. It’s part of my personality. When people do their best work it does look like them, perhaps not physically but spiritually. That was the series that was the most ‘channeled’ in a sense.”

The book Transformations (published in 1994) was followed by Illuminations (1998) and Light Warriors (2000), each project defined by the unique visual and emotional qualities Tenneson is able to import into each image. People often ask if she has some secret, specialized technique to create her prints, but Tenneson insists they are straightforward studio shots with strobes. She credits their otherworldly quality to a combination of lighting, the people she photographs, and her selection of props and fabric.

More germane to an appreciation of the work is the interior journey she undertakes, both with herself and her subjects, who are often her friends. This was particularly true of the “Light Warriors” series. “I see my life as a spiritual journey, and I was wondering at that time if young women felt that way,” she explains. “I photographed them and asked,
‘What is your journey like?’ When I say spiritual I do not mean religious; I’m not religious. It’s more a sense of being authentic to your own journey, to unfold or unravel your own authentic self.”

For Light Warriors Tenneson sought an earthier palette by using the 20×24 camera with a brown-toned Polaroid film that no longer exists. All the women in the book were chosen because they seemed to Tenneson to be on some sort of a spiritual journey.

The subjects hailed from all over the world—including Russia, Finland, Australia, Canada, Israel and Slovenia—underscoring the universality of Tenneson’s theme. A particularly striking image from this series of a young woman with a pair of doves balanced on her shoulders resulted from the kind of serendipity Tenneson often elicits.

“I met Dasha at an art opening in New York, and asked if she wanted to be a part of my project. I asked if she had any recurring dreams and she said, ‘I have this dream of a white bird coming out of my heart. I always wake up when it’s flying out.’ I had a similar dream about white birds, and I set out to find some white birds we could use for the shoot. I tried to reenact them coming out of Dasha’s heart, but it looked contrived. So we took a break, and at that point the birds landed on her shoulders. I had one sheet of film, which I immediately exposed. ‘That’s it! That’s a wrap!’ I cried.

“It was a gift. The birds were like sentinels. I think that’s why she was dreaming them: she wanted protection, spiritual protection perhaps. She had come from another country to New York, and I’m sure she was feeling the vulnerability I had felt when I moved there as a younger woman. For anybody going to a new place there are inner expectations and also fear. I’ve said many times that my best work happens through grace. Luck favors those who are prepared. You set the stage, you’re present, you prepare, then you have to let go.”

This approach proved successful once again with Wise Women, which became the best-selling photography book of 2002. “I was in my fifties and I didn’t have any role models ahead of me,” Tenneson says. “I thought, What’s it going to be like for me when I’m in my sixties, seventies and eighties? I asked friends and colleagues to recommend women aged 65 to 100 who were unusual in some way. Twenty percent were celebrities and eighty percent were ‘real women.’ In addition to photographing them, I asked what they had learned from their long lives and what advice they would give younger people.”

Wise Women was followed a couple years later by Amazing Men, a less delicate, more straightforward look at men aged 60 and older from diverse walks of life. With this project she was able to transcend masculine stereotypes, as in the portrait of a bare-chested Ben Kingsley, which powerfully mingles strength and vulnerability. It’s all part of the rapport she establishes regardless of her subjects’ gender.

“I love being completely there with my subjects. Honing in on that moment that is going to reveal something deeper than just the surface. There’s the mystery. There’s no formula for that.”

Trees of Life, Tenneson’s latest book, is partly the result of asking herself some fundamental questions when her partner passed away nearly six years ago.
“Who am I? What do I regret? What has meaning? As part of the healing process I moved to Maine to be nearer my son. I woke up one morning here and it was foggy outside. I couldn’t believe how beautiful it was, so I grabbed my camera and went out. Some spark lit inside me; I was on a wavelength that made me feel like it was part of my destiny to be doing this series. Trees are living things, so you can do portraits of them. And they have different times in their lifecycles. The older ones are very much like the subjects in my “Wise Women” series. I’m still asking questions, like who will I be in 25 years?”

But if Tenneson is still given to asking herself questions, she’s reached the point where she has found some answers.

“I am by nature somebody who’s a giver. I like mentoring younger artists. I enjoy getting to know people, understanding what makes them tick, how we’re all the same, and how we’re all different. I’m a student of human nature and always have been. And I reveal myself to my subjects; it’s not a one-way street. For people to give to you, you have to give to them. I enjoy that sharing.”

Fact File
For a deeper view of Tenneson’s work, and to experience the full tonal range of her vision, visit www.joycetenneson.com. 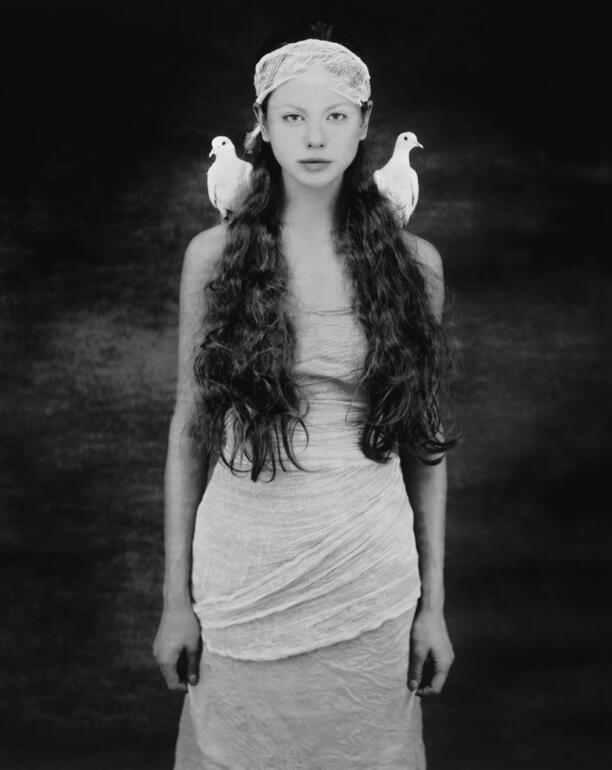