Jesse Lenz: About Locusts and Other Lives on the Land

Ever hear of that new coronavirus kid? Came to hang out in early 2020? Nicknamed COVID-19? It’s showing little interest in relaxing its bite on us—the United States in particular—gnawing us like a dog with a pork knuckle.
Recall Ecclesiastes (American Standard Version Bible, chapter 1, verse 14): “I have seen all the works that are done under the sun; and, behold, all is vanity and a striving after wind.” Our species has forgotten a lot about vanity and its long-term consequences. Time to get some perspective.

(Speaking of the Bible, recall the locust plague. While he was photographing in the three years leading up to 2020, was Lenz intuiting some insidious viral beast coming to torment us?)

Great and small, we are all animals here. Earth is our stage. Our work here is solemn, and earnest. Look at the face of a child, turned up to us to clarify the carnage of dead raccoons. Some serious working-out of mortality happening there.

Death lingers in these photographs. We encounter both human after-birth in the form of a glistening placenta, and animals after life. After skin and organs decompose skeletons settle to the ground like an abandoned rowboat’s hull on the ocean floor, a two-dimensional rendering. There’s a severed chicken head leaden on the straw; some minuscule mammalian fetuses untimely ripped from a womb; a cat, earlier seen alive and sun-warmed in a child’s arms, now still in its cardboard casket.

Witness a massive carcass being neatly bisected as it hangs from a Bobcat skid-steer’s bucket. Nature has its logic, the perfection of its unique order. Culture’s imposed geometries ruffle this idyll’s surfaces. Our attempts to create with lines and angles is again, more vanity. Farmers, builders, butchers and photographers impose their rectilinear logic.

We play to learn, and learn every moment. We think we have mastered our course, only to be tripped up by plans greater than ours. We will disappear someday, and the Earth will do her extraordinary work of absorbing our misdeeds. Those striven-after winds will sweep back and blow away our traces. Even in some of Lenz’s close portraits of family, heads and bodies are seen disappearing into vegetation and thickets.

All creatures in his kingdom seem attuned to and respectful of such humility. There’s very little grandiosity or pomp in his work, though there is quite a bit of greatness. Not to be too saccharine about it, but Lenz’s photographs capture big chunks of life’s ephemeral beauty.

There’s a gentler but no less insistent appetite at work in these emphatically analog records; instead of tearing into meat like the determined carnivore, Lenz resembles the ruminants, pursuing a greener diet, taking time to taste.
The scale-confounding spaces we encounter in Lenz’s images highlight the importance of range and distance. In this world we meet disproportionate insects, recently of Lewis Carroll’s Wonderland. Caterpillars loom larger than deer, cranes, raccoons or ravens. Domestic familiars and the familial—not the same thing—are close at hand.

Dylan Thomas caught the essence of this relationship in a lyrical prologue to a collection of his poetry. It has some Welsh vernacular in it, but overall it illuminates an uneasy bond between nature and culture.

O kingdom of neighbours, finned
Felled and quilled, flash to my patch
Work ark and the moonshine
Drinking Noah of the bay,
With pelt, and scale, and fleece:
Only the drowned deep bells
Of sheep and churches noise
Poor peace as the sun sets
And dark shoals every holy field.

The fields, flora and fauna are vital members of the Lenz household. As night covers the fields, the humans are enwrapped with Spidey fleece snugglies instead of pelts, scales or wool. Safe enclosures welcome wanderers back from the wide world.

One image, of a goggled, shallow water treasure hunter (the seeker stands and peers down into the dark water), reminds us of the commercial patchwork kingdom that has been largely banned from these images. Dense graffiti scrawls on an abutment, and the branded nature of the script on a Burger King cup, disrupt our peace. Though that logo is tiny in the frame, it has the punch of a bounding deer at field’s edge in another photograph.

Lenz’s photographs test the membrane between the illusion of dominance and the persistence of decay. They also demonstrate respect—a willingness to hold one’s distance, to keep things in perspective, to eat your share and not hoard resources. Minds and imaginations—particularly those of our children—are to be respected. We elders keep a distance. We don’t pry. We avoid bursting their bubbles in order to comprehend. We try and understand the work of childhood.

There’s a lot of solemnity in this world. Also, very few return gazes. The absorption in the task is thorough; credit the observer for leaving well enough alone.

Consider Lenz’s 2020 book, the most recent and intimate showcase for his work. The Locusts (Charcoal Press) maintains a monastic, meditative air; the photographs’ inherent muteness compels respectful silence. Lenz’s choice of epigraph is telling, a phrase from the American writer and theologian Frederick Buechner’s 2004 book Beyond Words: Daily Readings in the ABC’s of Faith; “Here is the world. Beautiful and terrible things will happen. Don’t be afraid.” There’s otherwise no text, captioning or pagination. Life wants to speak for itself here.

With his wife and a burgeoning brood of children (expanded by two with the arrival of twins early this year), Lenz has explored the notion of home on a broad basis, though he admits that “As the son of a missionary, I never had roots.”

Born in Montana in 1988. Moved to Latvia when he was six, and about nine months after, Latvia declared independence from the Soviet Union. Back to a small town in West Virginia for middle and high school. Then, hitting the road for ten years, living in a Gulfstream trailer with his young family.

Staying stationary may be the hardest part of the life business for someone who has enjoyed freedom to range and explore. “For the longest time,” Lenz admits, “I was only at peace if I was on the move.” Hard as it is to accept, life’s tasks shift as one’s 30s advance; time comes to set down at least some semblance of roots.

Now the clan resides on his wife’s home turf in northern Ohio, an hour or so south of Lake Erie. While uncertain he will ever fully “belong” somewhere—“I think I am just an outsider in all walks of life”—he is adapting. The following sounds like a paean to early middle age:

“I began to be more interested in going a mile deep and an inch wide than the reverse. However, I think it worked because I had spent over a decade traveling, collecting experiences, and it was now time to look inward.

“I think many young artists try to start there, but they need to have more life under their belt before they can have an interesting perspective….Any love and obsession I have found is through hours or years of looking and not finding first. The paradox is that you find love, obsession, connection and community by first giving it.”

In biblical terms, as ye reap, so shall you sow. As karma would have it, what goes around comes around.

Addendum
All works copyright Jesse Lenz. You can see more of his work at jesselenz.com and instagram.com/jesselenz. Dylan Thomas excerpt from “Author’s Prologue” in The Collected Poems of Dylan Thomas, 1934-1952 (New Directions, 1971). 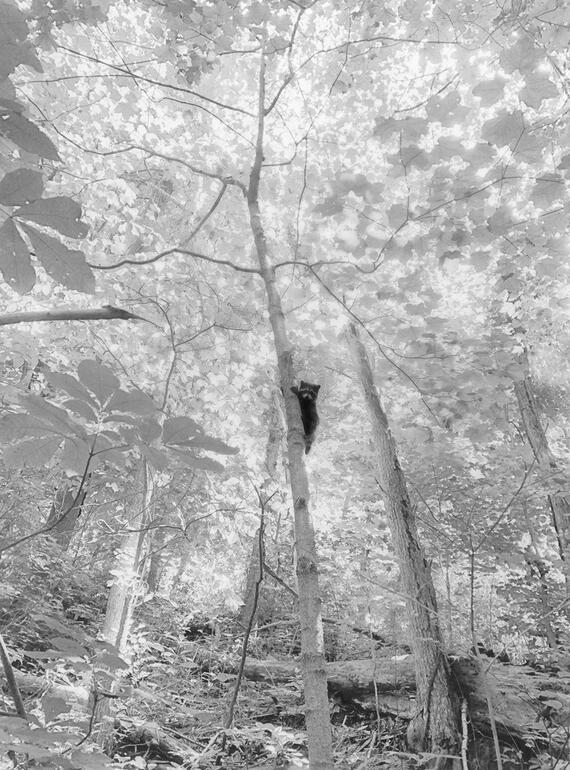