Since the first World Drivers’ Championship in 1950, won by Giuseppe Farina in an Alfa Romeo, the sport has exerted a special fascination on racing fans around the world. They’re drawn by the speed and power of the cars, by the artistry and daring of the drivers, and (even if they don’t care to admit it) by the inherent danger of this rarefied profession.

Although F1 retains its enormous popularity, it’s generally agreed that its Golden Era occurred between the mid-1950s and mid-’70s, when names like Juan Manuel Fangio, Stirling Moss, Jackie Stewart and Emerson Fittipaldi rang out over track loudspeakers. These were also the years when the most evocative F1 images were taken by such talented photographers as Robert Daley, Rainer W. Schlegelmilch, Mike Hayward and, perhaps foremost among them, Jesse Alexander.

Alexander at one time actually spent some time in the cockpit. “I went to racing school in Switzerland and drove the Mercedes W196, the same car that Moss and Fangio drove and won so many races with,” he says. But Alexander realized that he was better off behind the lens than behind the wheel of a racecar.

Born in Santa Barbara, California, in 1929, Alexander took up photography just out of high school. His interest in the medium evolved from his fascination with the images illustrating the most popular periodical of mid-20th century America: “I was an avid reader of Life magazine. Back then it was 10 cents a copy. I knew about Eugene Smith, Robert Capa and Edward Steichen. I never studied photography formally. They in a sense were my teachers.”

Alexander began freelancing upon graduating college. From the beginning he combined his passion for photography with his love of sports cars. He used to frequent racetracks at Pebble Beach and Palm Springs, taking pictures and familiarizing himself with drivers like Phil Hill and Johnny von Neumann. Alexander’s first big assignment came in 1953, when he photographed the demanding and dangerous La Carrera road race in Mexico. The following year he brought his family with him to Europe to cover the Formula One circuit and other championship events such as the 24 Hours of Le Mans, The Mille Miglia and Targa Florio.

“We moved to Switzerland near Interlaken because it was centrally located. I went over as a freelancer. I had a contract with Sports Cars Illustrated for a while. The magazine became Car and Driver in 1961. I would shoot the races on the weekend and go into the darkroom to print during the week,” he recalls.

In neighboring France, Alexander made many friends with a shared enthusiasm for motorsports and photography, not surprising since in essence its denizens invented both. The world’s first motor race took place in France in 1894, organized by the Parisian newspaper Le Petit Journal. The 79-mile Paris-to-Rouen route had Count Jules-Albert de Dion lumbering across the finish line first, having averaged 12 mph along the way. In 1912 Jacques Henri Lartigue snapped the “Grand Prix de Circuit de la Seine,” perhaps the most famous photograph from motorsports’ early years.

What sets Alexander’s photos apart from the rest of the pack? Apart from their formal excellence — their studied balance of light and shadow to create drama, their impeccable sense of timing — his images evince a fundamental concern with people, not just the superstar drivers, but also the everyday mechanics and the captivated spectators. It’s no surprise that Alexander lists Smith and Lartigue among his prime visual influences. One can see in his pictures a similar concern with narrative and an abundant sense of compassion for his subjects.

Another key factor in his success was the unparalleled access he had to Formula One’s coterie of drivers. As the legendary Stirling Moss wrote in the introduction to Alexander’s book Driven: “The drivers and participants who worked with Jesse during his decade on the European circuits knew him not simply as a highly regarded motor racing photographer, but also as a real enthusiast and a gentleman. He understood motor racing and shared our passion for it. This, as much as his talent, made him ‘one of us.’”

Indeed, Alexander’s portraits are often as powerful and dramatic as his racing shots. His photograph of Jim Clark moments after Clark won the 1962 Belgian Grand Prix captures his physical and emotional exhaustion, vivid testament to the price that F1 drivers paid in pursuit of success. A post-race shot of Stirling Moss at Goodwood, England, in 1958, evokes the joy of victory and the camaraderie between racer and crew. And Alexander’s photo of Princess Grace handing the winner’s trophy to Jackie Stewart at the 1966 Monaco Grand Prix is a brilliant distillation of grit and glamour.

Alexander made good use of a specialized paparazzi technique to capture such images. “You have to use your elbows. You have to be aggressive. Otherwise you don’t get the shot.”

Another Alexander hallmark: keep it simple.

“At the very beginning I used a Leica with a wide angle, a 35mm and a 135mm,” he says. “I also used a Rolleiflex. If it was a moment where I could take some time -— to do portraits, close-ups of engines or a landscape — the Rollei was ideal. The Rollei was the press camera of the day.”

In the 1960s Alexander switched to a Canon SLR to document the action on the track, allowing him to work with Canon’s longer lenses and explore spatial dynamics. Alexander explains how he was able to successfully convey the speed and drama of a race: “You have to get yourself to the right place at the right time, so knowledge of the racecourse and the drivers is a must. It’s important to plan ahead and to try and figure out where a car is going to be and then pre-focus on that area. When doing a pan shot to show speed I would pre-focus at the point where I figured I was going to press the button. Also, while it’s quite rare that a photographer gets hurt, you have to pay attention and be careful and think about where you want to stand.”

In 1955 Alexander was covering the 24 Hours of Le Mans when the most tragic event in racing history occurred, a crash that sent Pierre Levegh’s disintegrating Mercedes into the grandstands, killing more than 80 spectators and injuring another 120. Levegh also died. Amazingly, the race continued.

“I saw the smoke but I was not in the area of the accident,” recalls Alexander. “I really wasn’t aware of what had happened until I got back to the pits. Nobody really knew the extent of it for about 12 hours because it was just horrific. It happened within the first two hours I believe. The officials made a decision to continue the race, because if everybody left it would have jammed up the roads, which would have created even more problems for the emergency vehicles.

“There were some very bad accidents that happened when I was in Europe. Jackie Stewart, who started his career in the sixties, was a leader in trying to improve the safety aspects of the sport. Many of the tracks are wider and the cars they’re driving are much safer now because of him.”

While the 50s, 60s and 70s comprised Formula One’s classic era, they were also its deadliest. To date, 49 drivers have died while driving a Formula One car, either during a race, practice, qualifying or testing. Few of those fatalities occurred after 1978. Somewhat surprisingly, the drivers of that era had differing perspectives on the risks they faced on the track.

Said five-time F1 champion Juan Manuel Fangio of the 1958 Italian Grand Prix, “It was a great race. No one got killed.” On the other end of the spectrum was 1976 champion James Hunt, who once said, “To hell with safety. All I want to do is race.”

Of all the memorable drivers that Alexander photographed, his strongest personal connection was forged with Phil Hill, the 1961 world champion who passed away in 2008. “Phil and I became friends when he joined Ferrari in the mid-1950s,” Alexander recalls. “I was fortunate to be able to photograph him at the height of his career, in 1958, when he and Olivier Gendebien won the 24 Hours of Le Mans, and then in 1961, when he became World Champion following his victory at Monza in the Grand Prix of Italy.

“Phil had style. He loved classical music and grand opera. He knew engines as well as knowing how to drive a racecar. On the track the team Ferrari mechanics adored him. A big treat for me was to be driven around the Nürburgring in his rental car. He knew the circuit well, all 14 miles of it. As we hurtled around the circuit, ‘on the door handles,’ as the Brits say, I smiled and laughed like the proverbial teenager.” Located on the sides of the Eifel Mountains near Cologne, the old Nürburgring course was nicknamed “The Green Hell” by Jackie Stewart. At the time it was considered the most demanding racing circuit in the world.

Alexander’s work is held in numerous private collections and has frequently been exhibited in museums. In 2012, the Fahey/Klein Gallery in Los Angeles presented an exhibition of Alexander’s Monaco Grand Prix coverage from 1955 to 1971. Since 1929, the tiny principality of Monaco on the Cote d’Azur has been home to the most prestigious and demanding of all Grand Prix races. William Grover-Williams driving a Bugatti won the first race. Decades later, and with Alexander there to capture the action, Graham Hill would earn the title of “Mr. Monaco” for his five victories on that circuit in the 1960s. And John Frankenheimer’s Grand Prix (1966), the champion of all racing films, made extensive use of the Monaco circuit in one of the movie’s most exciting sequences.

Studying each photo up close on a gallery wall gives one an appreciation for how well Alexander was able to freeze unique slices of history. His photos not only show us the racecars and drivers, the pit crews and fans, but also the physical beauty of the host cities, as in his image of the start of the 1962 Monaco Grand Prix, in which the homes and apartments seem to tower over the starting grid. Such atmospherics help viewers connect on a distinctly emotional level with this long-vanished era.

“I loved the surroundings. I was drawn to them,” Alexander says. “The big advertisements on the walls were all part of the scene. That period really was a golden age. The term is kind of a cliché, but it’s valid. We were a tight-knit group. It was a small community and we were all friends — the drivers, the mechanics and the journalists. We were sort of an extended family. I had total access to go where I wanted to go. There are many more media people these days and there’s a hierarchy of who gets to go where. There is so much more money and so many more people involved. It’s a different world.”

Fact File
All photos © Jesse Alexander, courtesy of Fahey/Klein Gallery, Los Angeles. (www.faheykleingallery.com) To see of more of Alexander’s racing photography, as well as his travel, landscape, portrait and bird imagery, visit www.jessealexander.com. His many books include Forty Years of Motorsport Photography (1996), Driven (Chronicle Books, 2001), Porsche Moments (David Bull, 2006) and Portraits (David Bull, 2008). His latest, Monaco, will be published in 2013. 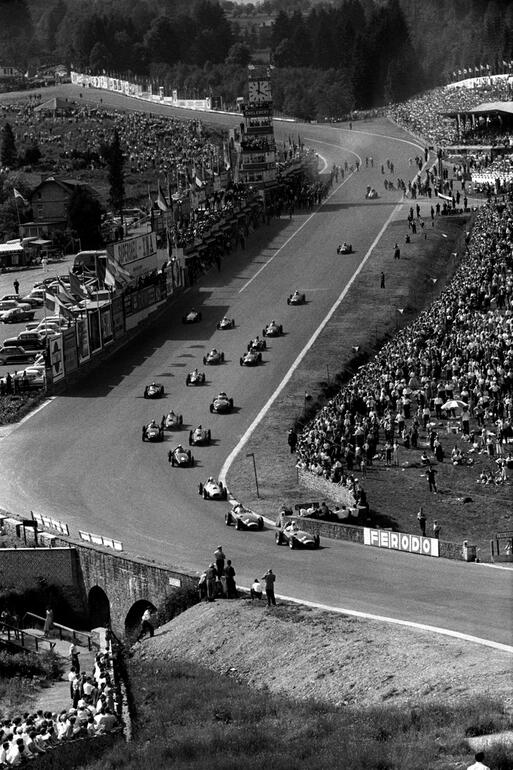