Jennifer Thoreson’s Machines: The Better Angels of our Nature?

We have always had an uneasy relationship with machines. Since the 19th century, our lives have become bound to the purposes of the mechanical devices that we so ingeniously craft. This ambivalence exists not only with our physical interactions but also within our philosophical and emotional connections to machines. The reality of workers being replaced by robots on the assembly line and the fantasy of the Terminator tracking down John Conner to eradicate humanity are examples that permeate our culture.

However, there are other ways to think about machine-human interactions that are markedly different from these memes. Artists oftentimes provide an unexpected perspective for the possibilities of new encounters. The clever readymades of Marcel Duchamp; the self-destructive metamechanics of Jean Tinguely; the hyperkinetic “Metropolis II” by Chris Burden, to name a very few, gives us other avenues, yet still retain a modicum of the uneasy detente between humans and their mechanical creations.

A decidedly different feeling toward this subject is revealed in the work of Jennifer Thoreson. In her three series—_Medic, Flora_ and _Baptism_—which exist in a metaphysical and metaphorical time and space, humans and machines don’t represent a postmodern or pop-cultural ethos, nor do they endure an uneasy alliance. Instead, the machines of Thoreson’s worlds peacefully coexist with and within us.

“I imagine the machines as contraptions, as devices the person in the photograph could have configured themselves, and that they are impermanent, barely held together,” she says. “Pairing bits and pieces of strange objects, mostly things that are obsolete or even unidentifiable, wiring or taping them together, and observing them as new creatures allowed for discovery and creation of useful, repurposed beings. I feel like the machines take on a human quality themselves, as if there are two emotional subjects in the room forming a strange love relationship. The machines represent dependency, comfort, companionship, hope and restoration. Repurposing unwanted or obsolete objects is a consistent theme in my work, and one that relates back to the Biblical idea of death and resurrection.”

The interaction of human and machine is for Thoreson a way to examine her thoughts about spirituality and religion. Which in turn acts as a proxy for our own inevitable soul-searching. Looking closely at her images helps us understand these beatific relationships. Regarding the use of religious iconography in her imagery, Thoreson says, “Biblical symbolism and ideology provides a framework, or backbone, for nearly all of my work. I use it to build the underlying structure and add layers of meaning. Though I know much, or even most, of these ideas may go unrecognized or undetected, it gives me a language, and a very specific point of reference to work from. Some references are more deliberate, like including bread and wine in an image, or an apple, or palm branch. Others just provide language and context, like using a light source that always comes from above.”

Though religious in expression, her photographs don’t espouse a particular dogma. Instead, they entreat us to consider the ideals of absolution, reconciliation and compassion. The underpinnings of religion become a way for her to include the viewer rather than exclude them. By avoiding popular culture as the keystone of her concepts Thoreson “plunges more deeply” into the multi-layered and complicated relationship between man and machine, man and God, or man and nature. These ties become the basis for an introspective, yet universal passion play of her scripting and design.

The imagery represents scenes from Thoreson’s life. “All of my work is chiefly autobiographical. Each body of work is a translation of personal experience and memory,” she says. “Baptism is a narrative pulling from my childhood experience in the Southern Baptist Church. Medic is a result of a personal medical trauma that revealed new facets and complexities in my own love relationships. The work is very focused and specific, and is formulated in vignettes that relate to vibrant, potent moments in my life.”

Thoreson’s enigmatic scenarios take place in constructed spaces that range from enclosed rooms to open landscapes to a flat surface. The details and placement of actors, sets and props in all three of her series remind us of the benefits of photographing an idea or metaphor instead of aiming one’s camera at the world, as it exists. Thoreson is in complete control; everything in the frame is there for a reason, in service to her idea and the image. She adds, “I often find myself searching for a space that operates like a blank canvas, a visually passive space that supports action and intensity with the human figures. The idea is almost stagelike, a melodrama unfolding on a carefully orchestrated set. The set itself is meticulously conceived, as it is used repeatedly, and delivers a consistent mood and message in the work.”

In Medic, the room acts as a framework for each scene. Thoreson alters the space to fit the tenor of each image. Pipes and wires enter and exit from various walls and ceilings; mysterious boxes are attached in a variety of places. In one, a doorway appears, and in another, a well-worn trapdoor barely holds up man, woman and sustaining machinery. Yet the viewpoint never changes, nor do the dimensions of the room and the base molding between wall and floor. These three constant elements allow us to concentrate on the small touches that add to each story: a suitcase on the floor, bits of symbolic food, a discarded vacuum tube. Through the props and the careful compositional construction, we are able to focus on the emotional content emanating from the silent exchange. Although the machines, props and spaces are essential, it is the models’ acting ability that carries the weight of the emotional content.

“I love working with human subjects. Formally, I love the wonderful shapes and lines that come from the human form, and the resulting body language and mood those lines evoke. I am interested in the temporary nature of human life, fragility and our impermanence. I love the idea of the human trace, or evidence of life. I do think of the figures in my photographs as surrogates, or actors portraying a very specifically referenced memory or idea.”

A sense of stillness in each scene propels the exposition of Thoreson’s memories. This happens because the actors are mostly in repose, caught in a moment of reflection rather than frozen by the camera’s shutter. In this state of rest, the humans stoically imitate the machines, which are motionless, quietly whirring, while tending to their human counterparts. The actors are inwardly engaged even as they are outwardly connected to their companion machine, or silently attending to a fellow human. The outside world is never acknowledged, inclining us to think that no world exists beyond the room. Medic reminds us of a natural history museum’s carefully constructed dioramas, replications of a civilization from another time and place.

In Baptism the venue shifts to a deserted beach inhabited by the same woman and the inevitable sustaining machinery of her life. Waves and sand form the backdrop for this narrative. Her interactions with contraptions, pipes, wires and hoses remind us of the symbols of birth, sin, redemption and death. The woman, swathed in Lazarus-like white gauze with swirling storm clouds overhead, gives the impression of a soul waiting for resurrection or salvation.

Though Thoreson uses digital manipulation in all her series, it’s more apparent in Baptism. “For Baptism, Medic and Flora, I used a combination of physical assemblage and sculpture and digital manipulation. For instance, in Medic, I built a full-scale sculpture, photographing objects together as one piece, then added additional elements digitally to give the machine its final form. I also played with scale digitally, manipulated the size of certain objects, and paired unlikely parts together to make a very curious machine.” The wires, pipes and machine structures amplify the desolation of the sand and sea. We understand why they belong, as they are symbolic of the woman’s state of being as well as the actual protectors of her life.

Flora is Thoreson’s most elegant body of work, in which nature, humanity and the machine blend into one being. The combination of the three elements is striking. While on a trip to the now shuttered tourist destination of Alcatraz prison, Thoreson was taken with the beautiful and abundant plant life still prospering on the island. She decided to use the flowers and vines, melding them with her images of women. Flora becomes a meditation on the “ideal woman” and through this Thoreson creates a new icon of woman as specimen, placed on a linen background, part doll, part human, her interior laid open. As she calls it, “…an earnest celebration of the woman, her nature and her continued strength.”

Yet, we detect a hint of suffering and forbearance overlaying the celebration. While the women’s faces hold us with a pre-Raphaelite beauty and fragility, heads showering forth flowers, leaves, vines and twigs in radiant array, their bodies contradict the composure of their placid gaze. The abdomens are open, revealing connections to devices that have begun an invasive transition into nature’s machines. Vines replace wires, and flowers take the place of circuits and gears. The poses remind one of holy cards depicting martyred saints. The disintegrating doll parts imply life’s fragility, but also allude to male attitudes towards the place of women in society and a rebuke of religion’s role in relegating women to a particular status. Despite the adversity, we are left with a feeling of strength, that no matter how damaged we are, nature has the ability to reassert itself, that life has way of springing forth from damaged roots.

Within these three bodies of work Thorsen inserts herself, yet reveals a narrative in which we have all acted, in some variation. She reminds us that our body is itself a machine of flesh, bone and blood and that, like all the mechanical devices we depend upon so acutely, it is ultimately prone to failure. Perhaps our fundamental discomfort regarding our relationship to our most complex machines is not that they will supplant us, but that they will, at some time, fail us. It is our dependence upon even the smallest task that they have taken over, and their intricacy too vast for most of us to repair, that unsettles us.

We are plunging into a time of inseparable connections to machines; they are an indissoluble part of our lives and will become obviously more so as decades pass. Artists born of this era will help lead the way to an understanding and acceptance of the inevitable bonds of this new union, of this undeniable symbiotic relationship. It is now that the conversation about the nexus between humanity and machines, with all of its possibilities, must occur. Jennifer Thoreson’s photographs have taken the first step toward our brave new world by helping us think about the positive outcomes: that machines can be the better angels of our nature.

Fact File
Our thanks to Jennifer DeCarlo at jdc Fine Art (www.jdcfineart.com) for her help preparing this article. You can immerse more fully in Jennifer Thoreson’s work at: www.jenniferthoresonfineart.com. 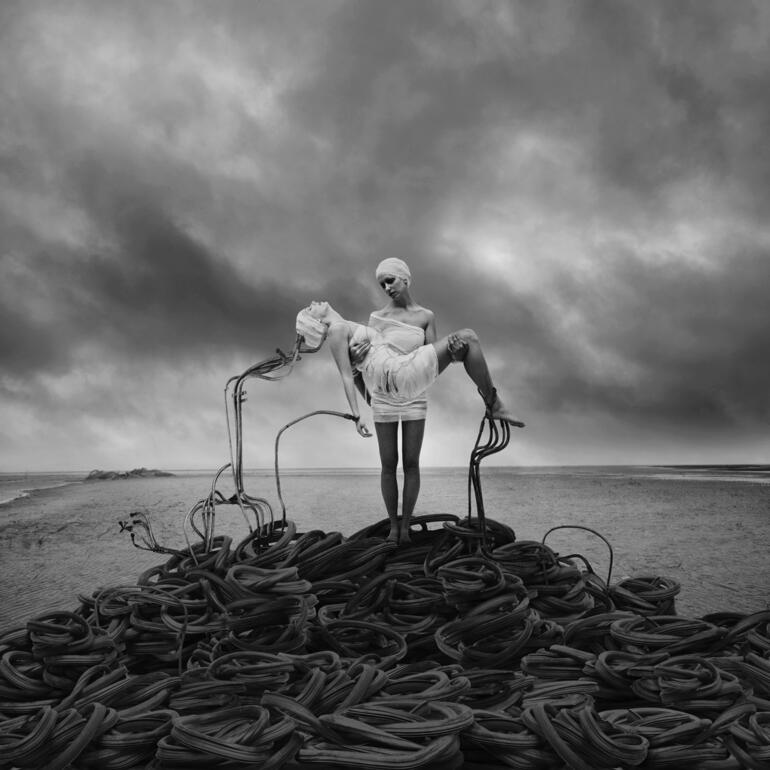