Jennifer Greenburg and the Revision of History

If we’re frank, we know that our children’s children, when they sit down to rummage through our treasured boxes of photographic memories, will quizzically look at photos that have no name, date or place. They will ask each other if anyone knows who this person in the picture is, and if no identification comes forth, the photos will be unceremoniously dumped in the trash bin, or given over to an estate sale.

It is a difficult thing to come to terms with—the probability that a cherished moment of our life will end up occupying a landfill or be sold to a stranger. This is the natural end for things that have lost a connection to their owners. However, there is another possibility. If we are lucky and the images have some universal appeal or portray an archetypal event, they might fall into the hands of an artist who will give them new meaning and a second life. Such is the case with the photographs used by Jennifer Greenburg in her body of work Revising History.

Looking at these images, you might think that Greenburg has appropriated photographs from the past—a vernacular version of Richard Prince or Sherrie Levine’s work. You might also think it odd that she has chosen photos that center on the life of a young woman whose look seems to emulate the platinum-haired movie stars of the 1950s, a pre-feminist era when gentlemen preferred blondes. In all this you would be partially correct. The photographs are to a degree appropriated, and the young woman is definitely the subject of the narrative.

What is not readily apparent, though, is that Greenburg is now the subject, that the images are only partial appropriations. What she is doing is cleverly and clandestinely subverting everyday events in which we have all taken part.

To achieve this sleight of hand, Greenburg uses a complex conceptual and technical approach to become a dramatist who uses often-repeated archetypal scenarios—domestic and social scenes that we can’t seem to stop reenacting.

Once the selection of the image has been made she undertakes an exacting process in her research of the time period of the 1950s. With an eye to detail, Greenburg tracks down suitable clothes, painstakingly reconstructs the hair and makeup of the time, and photographs herself with the appropriate lighting and pose. Through digital technology she seamlessly inserts herself, Zelig-like, into the picture, replacing the principal subject who was there at the time of its taking. Apart from her self-insertion, everything and everyone else in the photograph was taken at the time by some anonymous shutterbug.

What Greenburg does is what any good performer would do in the reenactment of another person’s life.

“I buy the photographs in lots from people who are cleaning out estates after someone has died or has been moved into a nursing home. Sometimes I am able to buy a person’s entire life in photographs. When that happens, I spend hours looking through the images trying to understand the person through their images. I imagine what their life was like, what they liked to do, and what they wanted from life.

“I then try to figure out what to do with the photographs. I try to become that person when I place myself in the image. It is a type of acting. The images depict ‘me,’ because that is how I can tell this story and that is how you will believe this story. But I am really someone else in the moment; I try to figure out how they would laugh, because that is not how I laugh. How did this person feel the moment the picture was taken? I am dreaming and fantasizing about being in someone else’s life.”

With the research, posing and final insertion of herself into the picture, the image transmogrifies into what Greenburg calls a “counterfeit.” The use of that word may make one think of photographs by other artists who construct scenarios using themselves as the subject; Sophie Calle and Cindy Sherman come to mind.

If this was all that was taking place one could overlook Revising History as a hybrid of photography and performance art. But Greenburg takes her work beyond these conceits through her use of vernacular images and in her selection of the quintessential rituals that portray some quality she finds compelling.

Revising History is a critique of our snapshooting culture, which includes an investigation into why these rather mundane activities warrant an addict-like need to record them. The series also becomes a meditation on rites repeated over succeeding generations and apparently done for the camera eye, the subject captured as both actor and participant. This line of thinking forces us to reflect on our own picture-taking impulses. Do they occur as a natural act of self-expression, or are they somehow implanted, Matrix-like, into our somnambulant brains?

We’ve seen these images not only in our own photographs, but repeated endlessly in advertisements. We begin to wonder if we are reflexively repeating that same narrative of American life—concocted yet-hoped for representations of middle class existence and the American Dream. In this, Greenburg’s images become a sly critique and deconstruction of those parables.

We are constantly exposed to pictures of these debatably important moments that end up in family or friends’ scrapbooks or as endlessly scrolling images on their cell phones. We thus come under no small amount of pressure to make sure that we have recorded those same debatably important milestones in our lives. We can’t help but feel the need to follow.

Like all of us, Greenburg admits that while she has a heightened awareness of this factory-installed desire to capture particular scenarios in our ongoing histories, she is at times subject to the same niggling doubts about what should be remembered through a photograph. Going beyond that, she wonders if the photograph of the event replaces our feeling at the time with a rosier picture of the event.

“We take these photographs in order to remember something that happened to us. But then, I believe, the memory of the actual occasion becomes replaced by that photograph. We remember things differently. Maybe you’re sitting there, bored at a wedding, but then you look at the photograph and you like the way your spouse looks and you start to redevelop the narrative. ‘Oh! That wedding was beautiful, the food was delicious, the bride was stunning.’ And suddenly, that wedding was the most exciting party, because your memory has been replaced by the photograph. But you’ll never realize it.

“I see it as I look through the photographs I collect and through my own personal photographs. I realize that these moments are not remarkable, and that all of these moments depicted by the camera are universally the same. Photographs usually stick to a convention, especially if they are taken to document a momentous occasion.

“And, I’ll implicate myself. When I was a bride, I wanted all those same photographs that all the other brides want. There is a need to have all of those photographs taken. I too need to fit into that convention! I too want evidence that this occasion transpired in my life—even if it is a ridiculous impulse, and even if I should know better.

“Of course it happened. Of course we were there—you don’t need photographic evidence! But culturally, we need it. I need it. So it’s interesting for me to discover that something so wanted and desired is, in the end, quite mundane. None of these moments are very special because they all appear the same in photographs. That is a tough discovery to get your head around.”

Greenburg has expressed these rites of passage in ways that are at once humorous and dark. Her bride octad is a wonderful example of this and a mesmerizing visualization of the most important moment in any wedding reception. She has meant us to see these images as a group, and so they become a study, or a typology of that most anticipated ritual—the eating of the first piece of wedding cake. But in her hands the simple and symbolic exchange harbors anxious undertones.

We all remember such episodes, as we have either witnessed or experienced them ourselves. They are usually humorous, with the bride and groom playing up the interchange. This recitation appears on track as we see Greenburg as the bride, smiling and fully invested in the moment as she feeds her new husband the small piece of cake. In each of the photographs she is the visual and emotional anchor that gives us the ability to study the look on each new husband’s face as they accept the white square. We get the feeling that these marriages may be doomed from the outset by the groom’s expression and the attitude implicit in his stance. It is remarkable that none of them seem happy, as their poses range from the awkward to the intimidating. In replaying this simple ritual, Greenburg’s repeated action begins to emulate the sacrament of Communion, the bride holding out forgiveness for any sin that the husband may commit during the course of their marriage. Viewing these, we ask ourselves if this is what was really happening when we watched this interplay take place firsthand.

Many of Greenburg’s other counterfeits carry similar overtones of humor and angst. My favorite is “Napping with Floyd, 2011.” The scene is a harmless one—a sleeping woman with the family cat perched comfortably on her hip. What is strange, and a little unsettling, is the gun at the ready, resting on the coffee table. Another off-kilter image is “My coworker was always jealous of my blonde hair, 2013.” (The captions always prove important to either understanding the image, or in opening a conversation about its context, which is Greenburg’s intent.)

In this scene we wonder if the coworker, judging by the look on her face, is really jealous. Perhaps the jealousy exists only in our blond heroine’s mind. In another photograph, “When I posed for a camera club, 2012,” Greenburg’s character is lost in thought, and her pensive pose leaves us with the feeling that the camera club session wasn’t a good experience. Such brooding images inspire reflection on the undercurrents of sexism and racism of the 1950s.

As important as its critique of that time, Greenburg’s work is also a necessary comment on photography as our preferred and premier memorial device. Through Revising History Greenburg is pointing out that we may be placing far too much importance on the process of recording memories instead of focusing on a life lived. This becomes the ultimate subtext of Greenburg’s work. Through the computerized nature of our lives, we have arrived at a watershed moment where the analog methods of memory-keeping will no longer hold sway: They are slowly being replaced by new, digitally enhanced memories. The line between what was a real experience and a counterfeit one is ever more difficult to parse, and the distinction is, at worst, becoming alarmingly blurred.

Fact File
Experience more of Greenburg’s unique sensibility at jennifergreenburg.com. Our thanks to San Diego gallerist Jennifer DeCarlo for her assistance with this feature. jdcfineart.com. 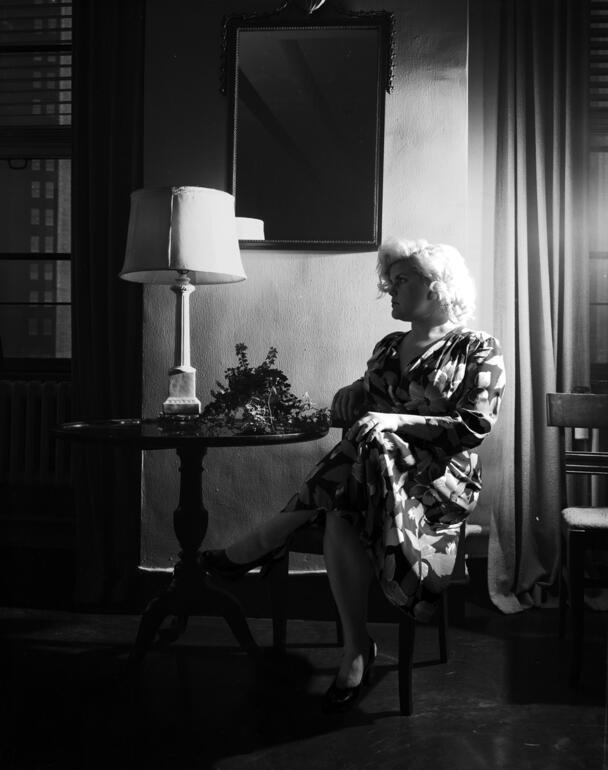