Take a look at most history books extolling humanity’s accomplishments, and you will find exploration of our world is typically near the top of the list. This is because traveling to terra incognita accounted for much of what any human culture had created up to that point, supporting the aspirations of those who would risk all to go where, presumably, no one had gone before.

The first group of people who launched themselves off the edge of their continent had to rely on all the inventions available to date: boats previously used for fishing, navigation developed for land travel, the ability to preserve food for lean times, containers made to store fresh water when it was wanting, and clothing to protect them against a variety of elements.

Over the past 100 years our cleverness has flipped this paradigm. The drive to explore the knotty outer reaches of earth, sea, air and space has spurred scientific and technological development directed solely at solving the problems and challenges of extreme exploration. Specifically, in the two most difficult environments that people yearn to travel through and move about in—the crushing pressure of deep oceans, and the vacuum of outer space. Crafts had to be constructed to traverse these places and protective suits developed to allow for venturing about in deadly environments outside the crafts.

It’s these suits, specifically the ones used in space travel—as well as the humanlike stand-in test subjects—that have provided James Maxwell creative grist. His interest in the gadgetry of space flight began as child, when Maxwell built and launched model rockets.

This attraction abided until his adult years, when in 2013, on a trip to the California Science Center in Los Angeles, he photographed his first space suit, Ken Mattingly’s Extra Mobility Unit. In this image he found a way to express his mixed feelings concerning the money and effort spent on the “Space Race” and his early fondness for rocketry.

Maxwell’s professional life as an architect is an indication of his appreciation for something well designed and constructed, such as the rockets used to propel astronauts beyond earth’s gravity and the suits that protect them. His ambivalence is understandable—as he stated in an interview with Charlotte Ormsby for Avaunt magazine. The world might be a better place if the U.S. and USSR had used the money and talent to create better social conditions rather than shoot it into space, with the ultimate goal of delivering long-range bombs with pinpoint accuracy. Maxwell’s imagery in two of his bodies of work, Rocket Man (seen here) and The Rocketry Hardware, becomes a metaphor for the at-odds feelings between his boyhood love and adult insights.

The photographs for Rocket Man were produced over a six-year period and with travel to a variety of space museums to obtain them. The images of the suits and the test dummies are not straightforward photographs. It’s difficult to know if they were produced using film or with a digital camera. Maxwell has admitted to his use of old lenses to render a specific feeling to his images; he also says that he uses Photoshop to alter the image. One imagines him using it to erase the background, to montage images to make more complex compositions and produce the feeling that we are looking at some forlorn and ancient relic.

Maxwell’s preference for making the final print is photogravure, which is itself an old and revered photographic process. He uses this method for the kind of control afforded a painter by overlaying different kinds of ink, and by manipulating the way the ink is applied.

The resulting image, after undergoing all of these alterations, is affecting in its sense of equivocal nostalgia. Future generations may agree with Maxwell’s ambivalence: that such contrivances and contraptions linked to exploratory aspirations should instead have been used for other purposes. 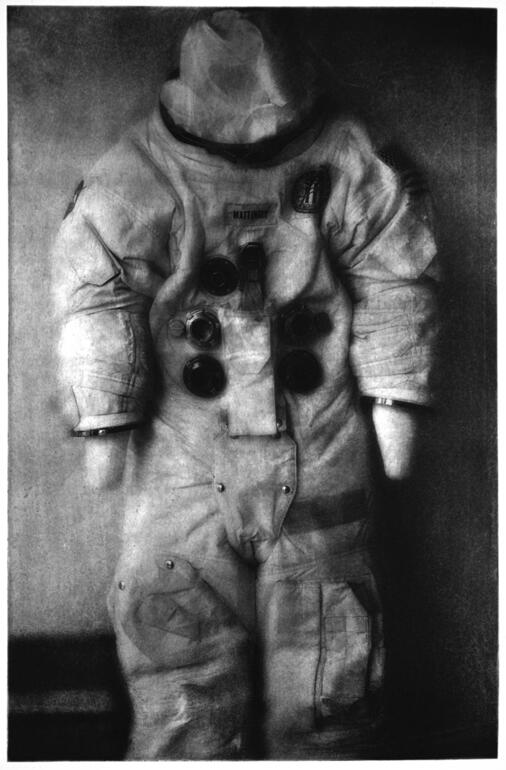