“The underlying theme in much of my work is the visualization of abstract concepts, and as such I frequently seek inspiration in mathematics and mythology,” says Hiroyasu Matsui of his portfolio Labyrinth, a marvelous and precisely rendered symbolic representation of man’s cosmological journey on the path to enlightenment. “I am attempting to convey the movement of human consciousness using a maze-like image while using the question of dimension for the fundamental structure,” the Tokyo-based artist elaborates.

Matsui’s approach to image making is formalistic in its search for an understanding of the unique qualities and characteristics of photographic expression, as well as in his technical approach.

“Out of all the methods of artistic expression, black-and-white film is the simplest way to examine the aesthetics and science of light, and because color is abstracted in black and white, it stimulates the imagination, awakens memories and evokes thought,” says Matsui, who drew inspiration for the series from the theories and work of Wasiliy Kandinsky, German Expressionism and the early 20th-century Russian art movement of Suprematism, in which the expression of artistic feeling derives from abstract representation of basic shapes and forms.
At first glance, Matsui’s images appear to be straightforward photographs of miniature-scale models that have been carefully constructed and lit. In fact, the images are derived from 3D computer graphics, which are used to create a series of “masks” that are placed above a light box and then photographed with traditional film. The project found its antecedents in two different, preliminary projects—one an exploration of the structure of a city through images of constrained back alleys in office blocks, and the other in an abstract collection made using light from a light box working with the same masking techniques.

“This current work does look three-dimensional, but because it’s made using only the light from a light box I’m able to freely choose how the light and shadows take shape,” Matsui says. “This is why light and shadows sometimes manifest themselves in ways that would be impossible in real life.”

Matsui’s process begins with the creation of a three-dimensional model of the labyrinth on his computer. He extends his creative reach by reproducing the internal structures of each “building” so he can more freely navigate between “indoors” and “outdoors” within the dimensional space.

“The buildings are placed randomly, so sometimes I encounter surprising compositions while on my [virtual] explorations,” says Matsui. “Once I find a spot I can photograph I’ll decide on the angle, focal length and lighting. Then, much like taking an actual photograph, I will take a two-dimensional image of the scene.”

After these initial steps, Matsui imports the image into Photoshop and divides each building surface into separate masks. The masks are printed out onto translucent overhead-projection (OHP) film sheets, which are then carefully stacked on a light box and photographed from above using a 35mm camera. A shot is taken with each layer while adjusting the exposure time to create differences in light density. Each individual sheet is then removed one layer at a time to allow for the next sheet to be recorded. The parts in the first layers to be removed are most exposed to light, so they become highlights, while the last layers form the shadows. The final film negative is printed in the darkroom on silver-gelatin paper.

“I wanted to create something that would be the antithesis to the common conception of what photography is, which is to shoot an image of what is actually in front of you,” says Matsui, who constructs a fantastic, yet wholly imagined world whose paths and byways speak to the ways in which the mind constructs its own reality out of a multitude of possible realities and outcomes.

“In general, the visual labyrinth is taken as a metaphor for life, but I wanted to see if I could visually express things like the spirituality of man and the movement of consciousness,” Matsui observes. 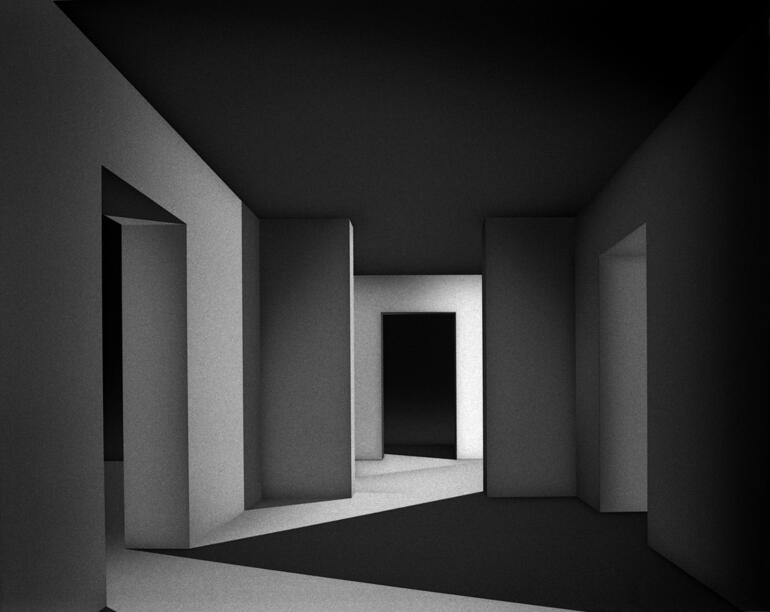