Kubota’s first serious forays into photography were on trips to the outer reaches of Japan, where he was doing fieldwork for his college political science thesis. The resulting images impressed Hiroshi Hamaya, the first Japanese photographer to join Magnum Photos, to whom Kubota was introduced through a school friend. He soon began assisting Hamaya, often as a driver, and through him was introduced to the photographers at Magnum Photos. This opened the door to the world of documentary photography at its best.

What did you learn from your early experiences assisting some of the Magnum photographers when they came to Japan?
In 1961 Elliott Erwitt, Burt Glinn, René Burri and Brian Brake came to Tokyo, and I became their assistant and translator. They worked in Japan like they did in their own countries. That overwhelmed and stunned me. I thought I should try to become like them. Of course, it was a childish notion at the time. I was studying political science at Waseda University in Tokyo at the time, but they had no school of photography and arts. But I learned so much by observing these Magnum photographers. Toward the end of the assignment René Burri gave me a beaten-up Leica M3 body and Elliott gave me a copy of the original edition of Henri Cartier-Bresson’s The Decisive Moment. It shocked me beyond words. I got so excited. I could not sleep. That book changed my life.

You became very close with another photographic legend, Andre Kertesz. How did that come about?
I met Kertesz in 1963 when he was doing some business with Magnum in New York. We became good friends at once, perhaps simply because we had a very good chemistry. I dedicated my retrospective book published by Aperture to him. It says, “To Andre Kertesz, who was my brother, father, grandfather and mentor,” which explains the kind of relationship we had. I found him dead at his Fifth Avenue apartment in August 1985. He was 92 years of age. I am sure his spirit was very happy that I’m the one who found him. He was such a great photographer who influenced me so much. I feel my photography is in no way like his, yet some people think otherwise. It was he who taught me the most about photography, about being sensitive and aware of things. I learned from him and his works aspects such as gentleness, affection and respect to what is being photographed. His images are so beautiful, moving and timeless. Whenever I was in New York City I visited him without fail. I don’t have an artistic eye like Kertesz, but the curator of the Kertesz estate, Robert Grubo, keeps telling me that my work is so much like Andre’s. I wish he were right.

How did photography make its way into your college graduation thesis at Waseda University?
My thesis was on the people’s awareness of the Japanese Constitution in the remote areas of the country. I went several times to Rausu, a town on the Shiretoko Peninsula which is at the northeast tip of Hokkaido; and Yoron, an island just north of Okinawa. Photography was the secondary purpose, but I did enjoy taking pictures with an old Canon camera my father loaned me. Perhaps these trips set my traveling patterns after I became a photographer. The pictures were published in the Bungeishinju monthly magazine, which amazed me. [“Bungei” means “literary art,” “art and literature,” or just “literature,” and “shunju” translates as “spring and autumn.”] It’s a very famous magazine in Japan and it’s still published. They ran 16 pages, then started giving me assignments.

How does your study and interest in political science show itself in your work?
Political leaders throughout history have controlled people’s fates. My political science background has helped me understand so much about the complexities and the status of the world. Perhaps my work reflects this.

What are your memories of World War II, and how have they influenced you?
I saw four fishermen on a beach get shot and killed right in front of me by an American fighter plane. It happened not far from Tokyo. My own experience and memory of a serious lack of food toward the end of the war and a few years afterward did motivate me during the project “Can We Feed Ourselves? Focus on Asia.” It was a very important project for me. Joho Network and JA—the Japan Agricultural Association—asked me to do a book about the food issue in Asia. I grabbed it, of course. I did it first in Japanese with a preface by Lester Brown, but my real desire was to do an English-language edition. But no American publisher showed any interest, because the answer is, “Yes, we can!” With additional funds from NHK and JA, I did an English edition with Magnum Photos New York.

I asked Sir Gordon Conway, the first non-American president of the Rockefeller Foundation, an expert on agriculture and the “green revolution,” to write a lengthy introduction. The book became such a success. I had wonderful exhibitions at the UN and at the Asia Society in New York, a special gallery created in the courtyard of the Palazzo Vecchio in Florence, and in the Brunei Gallery at the University of London. During the project I found that malnutrition is a very serious problem in America. Do you know why? Almost 60% of Americans eat too much, so they suffer from another kind of the malnutrition. What an irony. I am very proud of this small book.

How did another of your long-term projects, “China,” come about?
That was my first really big project. I was first able to go to that vast country in October 1978 as a guest of Zhou En-lai. I was very, very lucky. Over the next seven years I covered all the provinces. I did 45 visits for a total of 1,050 days. I self-financed the whole thing, but was able to place stories in many magazines around the world, which covered all the expenses. With the success of “China,” which included seven international editions of the book and a number of large exhibitions, I began to receive grants and assignments from global companies to do book projects on other parts of the world, including America, Southeast Asia and Japan.
What is it about Myanmar that has attracted you over the years?
After my coverage of the Fall of Saigon in 1975, I wanted to stay away from America for a while and I found Myanmar. I simply fell in love with her people. I’ve been there 75 times and have enjoyed those visits immensely.

You’ve had rare access to North Korea, having been there 13 times. Does the outside world have an accurate view of the reality of the country?
It is a very difficult question. I will go back there in the summer of 2016 with the Dean of the History Department at the University of Chicago, Professor Bruce Cummings. It will be his fourth visit. He’s the foremost authority on the modern history of Korea. North Korea is an extremely difficult country to know and understand. But it is not the only one. I am not sure how much I even understand about countries like America, China, Russia, Germany, South Korea, India, Japan and so on.

In your new book, Hiroji Kubota Photographer, you write that humanity is in such a mess because the loud voices are drowning out the quiet voices, and that great philosophy and great ideas are being driven out by the noise.
I do believe I said it right and accurately. The trend, I fear again, will not change. Maybe it will get worse. I have serious concerns for our children and their children.

What do you think might be done to change course toward a more positive future?
We need to focus more on developing clean alternative-energy sources, more food production and finding better political leadership.

What’s been the evolution of your camera equipment over the years?
Like my senior colleagues at Magnum, for a long time Leica was my camera. After 9/11, airport security made it risky or almost impossible to carry rolls and rolls of film, so I started using digital cameras. The recent digital cameras are fantastic. Currently I’m using the Canon 5D, but I may start using the Fujifilm mirrorless camera body and lenses. I still carry a flash, but try not to use it unless absolutely needed. Since the beginning of my career I’ve found that natural and available light is almost always the best. 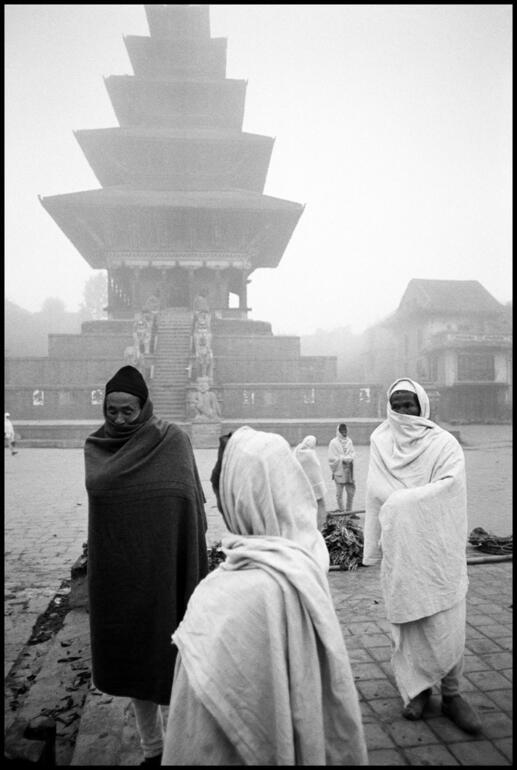