Harvey Wang: From Silver to Sensor

At this point, it’s the wrong question to ask. The more important one would be: What effect did it have on the work of traditional darkroom-based photography? In 2008 at the beginning of the second wave of the digital revolution—which would alter the act of making photographs as it had never been altered in the medium’s 181-year existence—a photographer named Harvey Wang decided to find out. (In regards to this discussion, the first wave was the home computer; the second wave was the smartphone.)

Wang had long been interested in documenting what was happening to various people and trades in the New York City area. “For the most part, my previous book projects dealt with the impact of change on professions and ways of life,” he says. “I was drawn to photograph craftsmen like the last hot-metal typesetters at a Yiddish newspaper. These folks were at the tail end of a transition in printing technology. I realized that I was living through a similar transition in my own profession, and thought it would be useful to interview other people going through it.”

Receiving a grant from the Sloan Foundation, Wang set out to make a documentary film, and over the span of five years (2008-2012) interviewed some 50 people (44 made it into the book) involved in the photographic industry, including a camera repairman, a gallerist, a conservator, the head of a film-manufacturing company, a lab owner, the developer of Photoshop, a few master printers and a sizable cross-section of photographers who were in various stages of acceptance, denial, depression or hope as they watched film-based photography relentlessly sucked out to sea by a powerful riptide of digital image capture. Wang titled the hour-long film From Darkroom to Daylight. In 2015 he secured a publisher, Daylight Books, and made a handsome 175-page companion volume with the same name. (The portraits in this feature are from that book, and no pixels were used in photographing them.)

The film and book are important, engaging and well-crafted additions to photography’s history, and to my knowledge are alone in using interviews to examine the subject. Watching the film or reading the many interviews and discussions, one is struck by the feeling of powerless surrender to what is happening.

The photographer Taryn Simon exemplifies this: “For a long while, I tried to pretend the transition to digital wasn’t happening, because it made the process of making pictures so unenjoyable. But I finally gave in during A Living Man Declared Dead and Other Chapters. [A series produced between 2008-2011.] The quantity of photographs, and getting them across borders easily, could not have been achieved without digital.” (Unless otherwise cited, all quotes from this one forward come from the book.)

And so it goes with other photographers, like Jonathan Torgovnik. “When this whole transition started, I was very reluctant to embrace digital photography. My position today is, they’re both good, but they’re different. It’s two different things.”

Or Rebecca Norris Webb: “I’m actually in the midst of my digital anxiety, and so am wading very slowly into working digitally. I’m a little wary about making the transition from film to digital, because at heart, I’m a very tactile photographer and bookmaker.”

It seems counterintuitive that a group of creative individuals would have such a hard time accepting a new technology rife with possibilities. Availing oneself of current methods for translating what one is deeply engaged in, or thinking about, is not a threat to the creative process. The addition of new means of expression typically opens up, not closes down, avenues of creativity.
That said, all art media have suffered through disorienting shifts and expansions in materials, visions and the sometimes-unrecognizable end products produced from that change. Figurative painting came to terms with abstraction. Sculptors eventually allowed for materials other than marble or cast bronze. Etchers made peace with lithography and screen-printing as forms of print media. These are but a few handy examples. It typically takes a generation or two for the interloper to become accepted and enfolded into that art medium’s standard visual, conceptual or physical representations. Photography is no different in this regard.

We can see this process of coming-to-terms played out in the thinking of two of the more prominent contemporary art photographers interviewed in the book: Sally Mann and Gregory Crewdson.

We see in Mann a person comfortable using the many pre-digital photographic technologies in her art making. “The process is extremely important. If I have an idea, I look for the right process to bring that to fruition. I knew exactly how I wanted all the Southern landscapes to look and feel, and I just had to find the right process.” She adds, “You pick your materials to suit your aesthetic and your vision. Sometimes it’s the other way around. Sometimes the process informs you what your vision really wants to be.”

From this, one would imagine that Mann is opening the door to whatever would work to fulfill an idea. Yet she leaves us with a puzzling coda, as she talks about the contemplative quality of her portraits, which uses the 173-year-old wet-plate collodion process. “There’s a certain sadness and depth that’s revealed in someone’s face, I think. You know you’re sort of sitting for the ages, and I don’t think an iPhone picture makes people think that they’re sitting for the ages.”

Gregory Crewdson has a surprisingly different point of view. In 2010, while working on a new series titled Sanctuary, he made tests using his typical 8 × 10-inch film camera along with a digital camera, and discovered that digital imagery better suited that body of work. Crewdson seems to be thinking out loud about his ultimate conclusion concerning the film vs. digital divide. “…I don’t know if I’ll go back to shooting film. I just don’t know if I will. But my general thought about all of this is the camera’s just a tool that gets you there. I don’t have any—there’s no ideology or dogma. To me, what’s most important is the artist’s imagination or the artist’s story, you know, the story that needs to come out.”

Wang does an excellent job of covering both sides of the argument. On the one hand is master printer and photographer Richard Benson, who succinctly states, “Silver is basically dead, and by God, it should be. It’s overdue. It was great while we had it. I think the digital capture is far superior on every level.”
Conversely, Richard Sandler waxes poetic in his defense of film-based photography. “Film always looks better, compared to digital. It always looks better to my eye. There’s nothing more beautiful than the grain of film. It just has a gorgeous look, and it responds to light, you know, the way a lover responds to your touch.”

Along with the photographers’ reactions, Wang threads in interviews with people who provide products and expertise to photographers and photography. For example, Takeshi Akagi repairs film cameras and decided not to take on repairing digital equipment, hoping that, “…some people have a very strong nostalgia for the analog camera, so I think we’ll still keep going.”

One of the big unknowns that haunted these film-based photographers, and still haunts us today, is anticipating when companies would/will stop making film and printing paper. Howard Hopwood, Chairman of Harman Technology LTD, spoke about the commitment of Harman, which owns Ilford film. “It’s very interesting that since I got into marketing, which was around, I guess, the early ’80s, 1982, 1983, people have been asking me the question: How long do you think black and white is going to last? Every time, I would say, well, I think it’s safe for five years. Now, we’re going on 28 years, and I’m still giving the same answer, which is, I think we’ll be okay for another five years. So it’s a very difficult question.” (Since this statement, Ilford film has continuously been on the market along with Kodak, Fuji and a range of smaller brands.)

Eric Taubman, owner of LTI Photographic Services, was less sanguine about the future of film processing and print labs. “…with the advent of digital, commercial jobs just fell off the cliff. After 2001, it was a 10-year process of scaling back. By 2006, we were down to eight or nine labs. Now we’re down to one. The fact that we have a lab today is because we’re doing work related to the art market.”

Harvey Wang, and the many people he interviewed that make up From Darkroom to Daylight, have, since they spoke, looked on as their fear or acceptance intensified or evolved as we rolled into the second decade of this century. The interviewees bring up so many important ideas and questions that they can’t all be covered in a short feature like this. One major concern brought up by a couple of the participants, and that still is hanging over digital capture, concerns access to old digital files, as operating systems upgrade and connectors morph and no longer accept those file formats or storage devices. Important questions like these, raised through Harvey’s project, invite some form of follow-up. I hope that in a few years from now he will re-interview as many participants as possible about what has transpired, as well as their thoughts on what is to come.

If you, gentle reader, have ever worked in a darkroom, Harvey’s film and book invite you to think about the past and your reactions to this momentous transition, which is still proceeding.

I began my own career in photography at the end of the 1970s. The darkroom was always a daunting and frustrating place for me to work in: I simultaneously loved it and hated it. I was ambivalent when the transition from film to digital got underway. I bought my first digital camera in 2000, a Canon D30. For my kind of work it had many advantages over film. Clients used transparencies for all the commercial work I was involved with, so they were happy to not be billed for film and processing, making me take on the duties of a lab in getting my images ready for my clients to use. In my fine art work, looking at a computer monitor while shooting has had many advantages over looking at Polaroids, though I miss their look and the ritual of peeling them apart. The college that I teach at is completely digital, and though I have some students who want to dive into film, once they see the cost and complexity of setting up a darkroom, their interest usually fades. Obviously, for me and for many of you, this transition has been met with mixed feelings and challenges.

Money is and has always been a driving factor in photography. (Several of the interviewees comment on this fact.) The companies that make and process film cannot continue to manufacture or process it once a critical mass of people stop using film. I hope that film-based photography outlasts me, although it’s not improbable to think that at some point in photography’s future, a physical print will become an anomaly. We can only hope that there will still be people like Harvey who have committed themselves to passing on the delights and mysteries of working in a darkroom.

When I asked Harvey if I should use the final paragraph in his afterword to express his feelings on the subject, or if he had something new that he wanted to add to the continuing conversation that he began in 2008, he said to go ahead and use what he wrote then:

“Many people are dismantling their darkrooms, but not me. I’m looking forward to teaching my youngest daughter and my son to print, as I taught my two grown daughters. It’s an opportunity to spend time with them away from a screen, in a quiet place, to show them what’s possible when you give yourself the time and space to concentrate, reflect, and master the materials of your craft.” 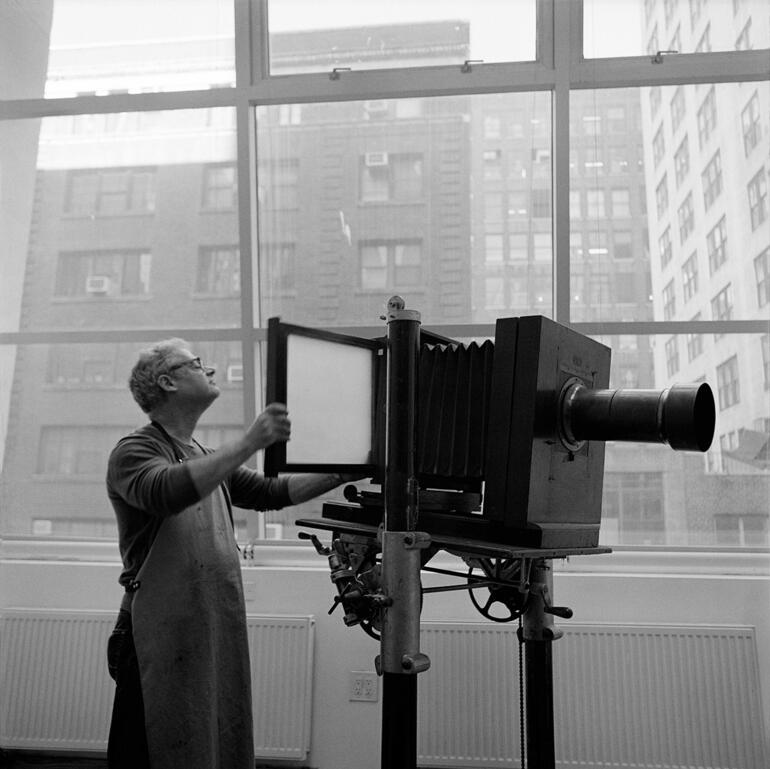