Eugene Richards: Pictures on the Edge

Working very close to his subjects and photographing almost exclusively with wide-angle lenses, Richards’ images project an explosive dynamism and emotional energy within which resides a spiritual quietude that speaks both to the inherent power of the photographic medium as well as the dignity and grace of his subjects.

“Not everything is stable in life, and that is how I feel about the world and my place in it,” Richards commented in response to questions about his photographic technique in the 2007 video, The Compassionate Eye.

“I have always been a little afraid of the ‘iconic’ image, where everything is settled and final. Wide-angle lenses give you a discordance and complexity like life itself, which is transitory, and my style being a little bit fractured and incomplete reflects that.”

Whether he is documenting the struggles of sharecroppers living in the Arkansas Delta (Few Comforts or Surprises: The Arkansas Delta,1973), the urgency of physicians in a Denver emergency room confronting the life-and-death realities of street violence (The Knife & Gun Club: Scenes From an Emergency Room, 1989), the ravages of drug addiction in inner-city Brooklyn and North Philadelphia (Cocaine True, Cocaine Blue, 1994), or the physical and psychological scars of wounded Iraqi War vets (War Is Personal, 2010), Richards explores the broader political and social issues of our times through the prism of the individual lives that he photographs. It is through this convergence of the private and public that Richards most effectively uncovers profound moments of truth and redemption.

Born in in 1944 in Dorchester, Massachusetts, Richards first took up photography as a teenager, making color landscapes during off hours working various summer jobs. After graduating from Northeastern University with a degree in English and journalism, he studied photography with Minor White at the Massachusetts Institute of Technology. In 1968 Richards joined VISTA (Volunteers in Service to America), where he worked as a health advocate and helped found the community newspaper Many Voices, which focused on social issues affecting the black community in east Arkansas where he worked. Photographs from his experiences there formed the basis of his first book, Few Comforts or Surprises. Richards’ second book, Dorchester Days, a deeply personal look at the tight-knit, working class community in which he was born and raised, represented a breakthrough in terms of style and broader recognition.

Upon being invited to join the famed Magnum photo agency, where he remained for more than 15 years, Richards embarked on a career as a freelance magazine photographer, covering assignments on such diverse topics as the American family, drug addiction, river blindness, pediatric AIDS, abuses within the meatpacking industry, and aging and death in America.
During his long and accomplished career, Richards has been awarded a Guggenheim Fellowship, was a three-time National Endowment for the Arts recipient, and a W. Eugene Smith Memorial award and Robert F. Kennedy Lifetime Achievement in Journalism award recipient. Richards’ photographs have been exhibited in more than 40 solo shows in the U.S. and abroad.

In a telephone interview from his home in New York City, Richards, who is currently working on two new book projects drawn from his extensive archive, discussed his career, the huge transformations in photography in the digital age, and the future of documentary photography as a meaningful expression of social concern and justice.

How did you become interested in photography, and what were some of your more formative experiences as a photographer?

I got my first camera from my mom, who worked as a housekeeper. She gave me the money to buy an old Exacta when I was 16. It was a beautiful thing. I had a summer job working all by myself painting construction barrels, and I would slip off into the woods with my camera to take pictures. It was like nirvana, truly magical. It was enjoyable and spiritual to look at things I would never have looked at if I didn’t have a camera. That opened the door for me and gave me a way out.

What was it like studying with Minor White, and what kind of influence did he have on you considering that your work went in such an opposite direction from his?

I didn’t have a portfolio when I enrolled, and there were no more than eight or nine students in the class, which was focused on large-format photography. I was totally lost in the beginning, but soon became enamored with Minor. He was always wrapped up in things below the surface, and the most important thing he taught me was to slow down. Minor made you “look” and taught us the difference between what the eye sees and what the camera sees. That difference carried into my enjoyment and suspicion of photography. It is easy to be seduced by an image, but no matter what you are doing and no matter how much you push reality you are never quite there when it comes to the “truth.” It was a valuable lesson that made me question, even more nowadays, what I am seeing.

How has your approach to photography and the stories you document evolved over the years?

When I look at my Arkansas work I realized it had a social purpose—to talk about poverty—and that is the direction I went in terms of making the case in regard to social issues. Now I am back to “seeing” for the sake of it. It is freeing in the sense that my work is a little gentler at times, at least until the story turns hard. In terms of approach there is no real change. I keep wanting to grow even though I still have the same way of seeing.

With black and white being such an integral but by no means exclusive part of your photographic aesthetic, how has the current dominance of color imagery impacted how you work?

I have never been so aware of the difference between color and black and white since I began working on my book, Red Ball of a Sun Slipping Down, which contains black-and-white and color images. There is an inarguable permanence about black and white. One feels like the place or subject you have photographed has been there forever, and you get the impression that if you went back it would still be there. Color has a feeling of impermanence about it. It’s the difference between the emotional and the intellectual. When you are shooting in color everything is fleeting and dependent on so many elements. In some ways the palette of emotion is larger in color, but for me black and white is so solemn, grand and significant.

What were some of the driving factors or influences that led you to pursue particular stories during your career?

I don’t think I’ve ever gone after a story. Stories find you. Dorchester Days became a book because I couldn’t get a job and had no work but felt I had to keep doing something. The book on cancer (Exploding into Life, 1986), that story found us as a result of my wife’s cancer.

Most of my bigger projects started as assignments. I freaked initially when I started the Denver emergency room assignment, but soon started to open up and felt part of a family, a complex and fascinating family of heroic people trying to save each other. I got sucked into that. That is how projects happen; I get an assignment, then can’t get away from it. It was the same with the drug work story (Cocaine True, Cocaine Blue) for Life.

What do you regard as your most meaningful or important story?

The one inescapable one was the drug book. The criticism of the work was so enormous and ravaging regarding the issues of addiction in the Black and Hispanic communities. The criticism was not about the work itself, but the perceived negative depiction of African Americans and Hispanics. The perspective of the book was how addiction was killing the community. But in a sense people were right because addiction is usually a negative. It is a complicated issue.

How has photojournalism/documentary photography been impacted by the changing media landscape?

There is no way around it—the options in print for any extended photo stories are almost nil, which leaves us with the online digital world, where stories are being done in increasing numbers as small media pieces such as videos of animated slides. It is increasingly hard to explore something in depth. Doing books is so incredibly hard today, when most editors don’t think anyone is interested in looking at things in books and everything is presented in bytes of news.

Can documentary photography continue to have the same kind of social impact it had in the past?

The world of photographic storytelling is starting to lose the battle to video, which is sad, but that’s the way it is. People are paying less attention to issues of social justice, although there is a lot of incredible interest in conflict photography. My problem with that is no one has developed a new way of seeing, a criticism that I at times level at myself as well. We have to find other ways of doing what we have done for such a long time. The vitality has gone out of it. I think photography can and should exist on a larger level.

How and when does a documentary photograph transcend the immediate concerns of a specific story to embrace broader concerns and assume the mantle of art?

That is something that is enormously important. Doing stories is different than making photographs. I care more about the story than individual photographs; they are just tools. But it’s a give-and-take thing. Some photographs don’t function as facts but as emotions, memories and feelings, and that’s when they live. It can be a struggle to get there, but you always want something that reflects exclusively your way of seeing. That is what it’s all about, to forget what you see and photograph what you feel. It’s a matter of finding out who you are and staying with it.

After close to five decades of important work, have you given much thought about your legacy and what you would like to see happen with your archive?

I haven’t thought about my legacy, although I have been asked do a retrospective, and I have already done a number of books to fill in that gap. The truth is, I have been more active than I have ever been. The idea for a retrospective sounds like a bad, strange conceit, but my only interest in a retrospective would be to find my own history.

What does the future hold for you in terms of new projects and new ways to get your work out to people?

There is a temptation to turn away from documentary work, as there are increasingly limited opportunities, but whatever is still called “social documentary” work I still do, although I am kind of in a holding pattern. That kind of work is not popular and not considered art. The gallery world has made the determination that it is not art, period, and the punch line you hear whenever this kind of work comes up in a gallery context is, “Is this great art or documentary photography?”

Any aspirations I had of taking my work in a different direction relative to the art world has passed, but what is left is not a bad place to be. I can still turn to books and magazines that don’t make those distinctions between art and documentary. 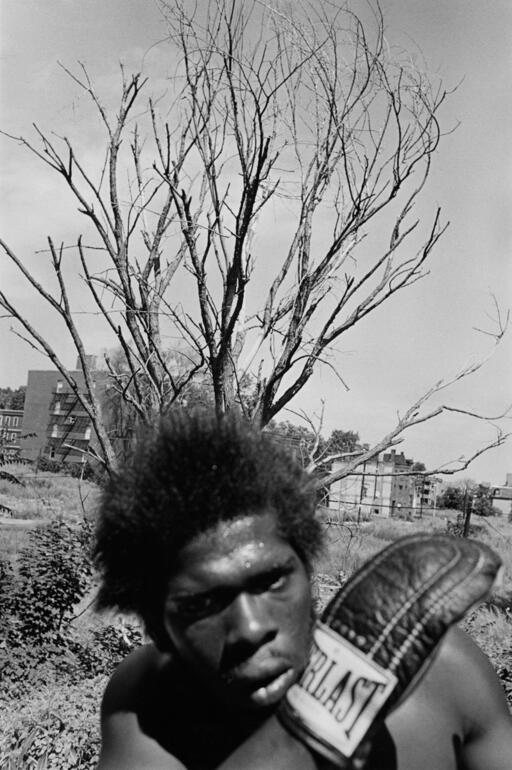