At first glance, Dan Sackheim’s images represent what could be a rather complementary fit as cover art, or illustrations for an updated collection of J.G. Ballard, William S. Burroughs, or Philip K. Dick. Alt-lit to post-punk, their atmospherics further evoke the eerie spatiality of Joy Division.

Deconstructing the subtext, I grasp a range of signifiers. For one—likely my most subjective, personal read—the lingering aftereffect of E pluribus seperatum; a psychological debris field of dissociation wrought by the Pandemic. Another salient I discern plays on the poetics of space, the dehumanizing scale of our built environment.

Taken further, given the images’ shadowplay, stasis and undertone of otherness, one might discern the temporality of a perfectly structured, artlessly artless future… that might have already taken place. Perhaps, folded into the placeless intentionalities lies the suggestion of a sterile, North Korea-like alt reality superimposed on North America.

Cones to theoretical rods, Sackheim’s imagery seems utterly in sync with more esoteric visionary realms, more expansive imaginal experiences; reaching simultaneously into both the subconscious and higher consciousness. Those resonances echo one of Jean Baudrillard’s defining thrusts, that of simulacra; the heavyweight of French post-mod philosopher/sociologists acquitted himself as a prolific, if not bang-on critic of contemporary culture. Specifically, the human/social mutation wrought by New Media, the Information Age and A.I.

Straightaway, the auteur sees my analogies only to raise me one iconic visual artist when pressed for influences. “I’d cite the work of Magnum photographer/filmmaker Rene Burri. He’s best known for a series shot in 1960s-era Sao Paulo (Brazil).” Sackheim relates being profoundly moved by the Swiss-born Burri’s “very cinematic sensibility; the emotional punch evoking feelings—at least for me—of voyeurism as much as isolation.”

Sackheim emphasized the latter themes of viewing others intimately, coupled with the psychology of separation, as central to his photographic canon. “This is one reason I was drawn, early in my career, to the work of writer-director Alan Pakula.” Specifically, Pakula’s “paranoia trilogy”: The Parallax View, Klute and All the President’s Men.

“These are narratives that play to our inherent distrust of authority and institutions,” Sackheim says. “Despite their very ’70s zeitgeist, those themes, extreme distrust if not palpable skepticism, remain as relevant today, if not more so than when those neo-noir thrillers were released.”

Reverting from function to form, the late film critic Roger Ebert could have been speaking to Sackheim’s series when he cited the Bronx-born Pakula’s particular cinematic emphasis on “the outdoor menace.” Put figuratively, a modern architectural ethos so monolithic, so brutally life-snuffing it verges on totalitarian. Forasmuch, I view a strong parallel in Sackheim’s compositing, the layered blackness; his adroit use of darkness as negative space.

The son of a screenwriter, “as well as an amazingly talented jazz pianist,” Sackheim disclosed an early, if severe learning disability, dyslexia, “when very few people in education understood how to treat it.” His self-esteem diminished, he turned deficit into what would become the very foundations of his craft. Immersing himself in “more solitary pursuits: first, a passion for reading and movies; then an embrace of storytelling as a whole.”

Ineffably, the perceptive power of Dan Sackheim’s platform has been shaped by what shaped him, thematically, stylistically; big screen to TV to his first Leica M9 rangefinder camera. Bearing those influences, this visual narrative is packed with one in-the-moment question after another: from design for life to reality directing the vacuum—or vice versa—to our uncertain destinies. 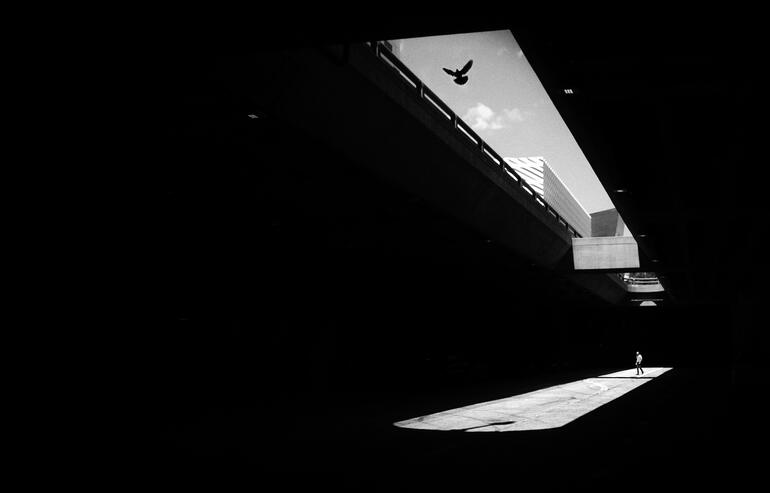