America’s cities have always been a source of creative energy for artists. This is particularly true of New York City, which has been at the center of American culture for the past two centuries. Life, both on the streets and in the blocks and rows of towering buildings, has been the grist for every art form, with photography at the forefront. Beginning with Paul Strand’s early work, New York has become the undisputed hub these past 100 years for the art of American street photography. Photographs of people have predominated, but buildings have also been an important subject matter when it comes to representing life in the Big Apple.

Each generation of artists brings new ways of visually rethinking cities in general and New York in particular. This process of interpretation is apparent in the photography of Daniel Joder, whose series An Orwellian New York offers fresh perceptions of the streets of Manhattan. Often, it takes someone from outside an area so intimately known by its inhabitants to provide a new perspective of a visually well-worn place. Living in Boulder, Colorado, Joder made a trip to New York ready to document life on the streets, but instead found the compressed space of its sun-blocking buildings more compelling and symbolic of 21st century city life.

“I originally visited NYC with the idea of doing some street photography—after all, it is the mecca for that,” says Joder. “However, I immediately felt drawn to the imposing and solitary heights of the massive skyscrapers instead, so I followed my intuition. To me, the bustling, consuming and teeming human masses crowding the street existed in stark contrast to the towering steel and glass structures above, the latter seemingly designed to impose a certain degree of separation, conformity and alienation. From there, it wasn’t hard to imagine a 1984-type world of control and consumption.”

To create his dystopian vision, Joder used a telephoto lens and began to shoot images from street view, looking up, compressing space and positioning billboards and signs against buildings and sky. These diptych-like photographs (they are not combined images in Photoshop, but painstakingly framed to appear so) ask us to see the city in a politically charged way. Art that comes from such a viewpoint is an important element of Joder’s approach.

“I think all art is a political statement to a greater or lesser degree, even the simple landscape, as demonstrated in the American West in the 19th and 20th centuries by Watkins, King, Jackson, Adams, Cole, Moran, Bierstadt, et al. Today, the ‘mere’ landscape can serve as a bookmark of climate change, species extinction, human overpopulation and environmental degradation. It’s a matter of what you as the viewer choose to read into a particular piece as well as the artist’s intentions. I find my work gravitating more and more toward political and social commentary, often through simple documentation and sometimes through creative photographic collages, as I feel very strongly that the next 100 years will be critical for our survival as a species.”

Joder’s images are at once disorienting and disquieting. The disorientation is due to the angle at which the photos were shot and the scale of the human forms next to the buildings, usually provided by the adjacent billboards. They are disquieting because the human element is sometimes in opposition to the building (read, power structure) next to it, as in “Quiet Desperation,” or in “The Spy Next Door,” with the position of the Big Brother-like visage (read, all-seeing eye) violating the sanctity of privacy by peering into an apartment window.
Even Joder’s photographs of buildings without advertising images project, through structural uniformity, feelings of unassailable corporate or governmental power. Most important, Joder gives us a personal view of the present, documenting our time, an era that will in future provide evidence of our conflicted political and social climate. 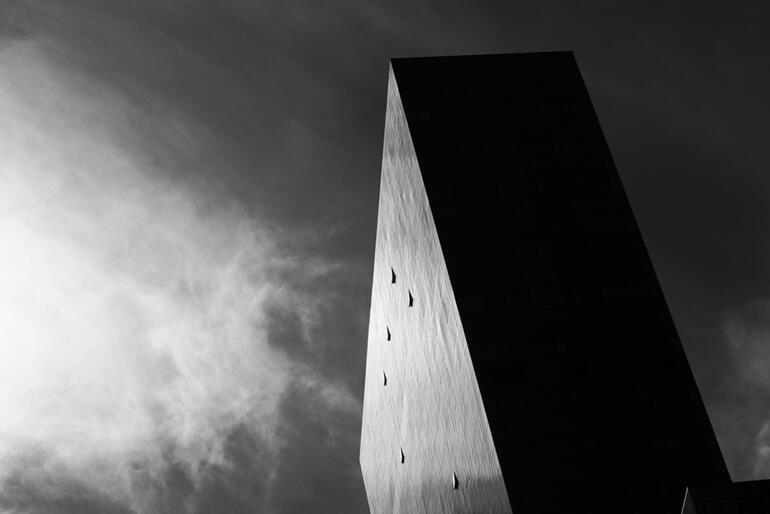