Used to be, photographs required a negative, from which one made a positive. Although Canadian artist Christopher Shaw is using digital image-making technology, his photography still draws on dualities. Through his eyes and hands, the photographic image reflects both the visible world — a real place — and a parallel world alive inside him that fosters reactions that are more psychological or emotional than sense-based.

Prefacing this real/surreal duality is a classic story, or perhaps a twist on the story as set forth by Grimm or Mother Goose. Shaw’s journey inverts the familiar one, of domesticated children being set adrift in the dark forest, into a tale of a rural child encountering the hazards of the urban jungle. The story ends, in Shaw’s case, with a return to his Alberta home — Ulysses after his odyssey — but we are not shown those return images; we see what Shaw experienced.

The Light is Dark narrates encounters with a city that may once have resembled Toronto; that was the place Shaw chose as his new place of residence. In these photographs, however, the real Toronto morphs into a digitized, animated, fracturing scene out of film noir. Shaw explains that this series “explores the feeling of being lost and alone in an unfamiliar place.” At such moments in such places, nighttime exacerbates alienation. For the newcomer, even objects that were slightly recognizable in daylight become shadow versions of themselves after sunset.

Shaw uses the word “distorted” to describe his sense of self in this new place. He contrived a way for his photographs to mirror this distortion. “My process in making the images was to stand in a fixed position while taking multiple photographs of an area; then stitch them together in a distorted, broken and manipulated construction.”

In other words, the straight photograph fell short as a record of experience. Shaw’s solution effectively and eloquently solves the problem. As anyone who has spent time in cities knows, the built environment is otherworldly even in daylight.

“The night reveals unanticipated viewpoints,” he asserts. “Things appear more compelling and mysterious to me. I search for shadow and light to reveal the true essence of a thing without the interference of all the clutter that daylight exposes.” Shaw articulates a second intriguing inversion here — the idea that truth emerges only when darkness hides the mess.

Ironically, Shaw was drawn to photograph at night, in those uneasy hours, by a “desire to create while there are fewer people around and there is less activity to distract me from the process.” Focusing mentally on his discomfort in the city, and later allowing that discomfort to guide his crazy-quilt reordering of what he recorded, has led to photographs that convey the queasy, vertiginous feel of cities at night.

Fearful as one might be about wandering into this realm of malevolent, torquing giants and earthquaked landscapes, Shaw offers a small consolation in the form of a fellow traveler, a human figure in each frame, included to “reinforce the feeling of isolation and give scale to the surrounding structures. The lone figure also invites the viewer into the scenery.” While the figure might be a stand-in for Ulysses, a surrogate for ourselves or a portrait of the artist feeling “tiny in comparison to the massive concrete structures,” its role is unclear. It might lead us out of the maze, or right into the teeth of the Minotaur. Shaw’s photographs, with their oxymoronic title, simultaneously depict the benign and the malevolent.

As noted earlier, we learn that Shaw makes it out of the maze and back home. These photographs, made while still deep in his city experience, have a quality of futility about them. I ask him about what seems to me a delirium verging on hopelessness. Shaw replies that although he was getting more comfortable in Toronto, he still felt out of place. “A more positive relationship to the spaces I found myself surrounded by” was not in the cards. But a fine record of alienation was gained. 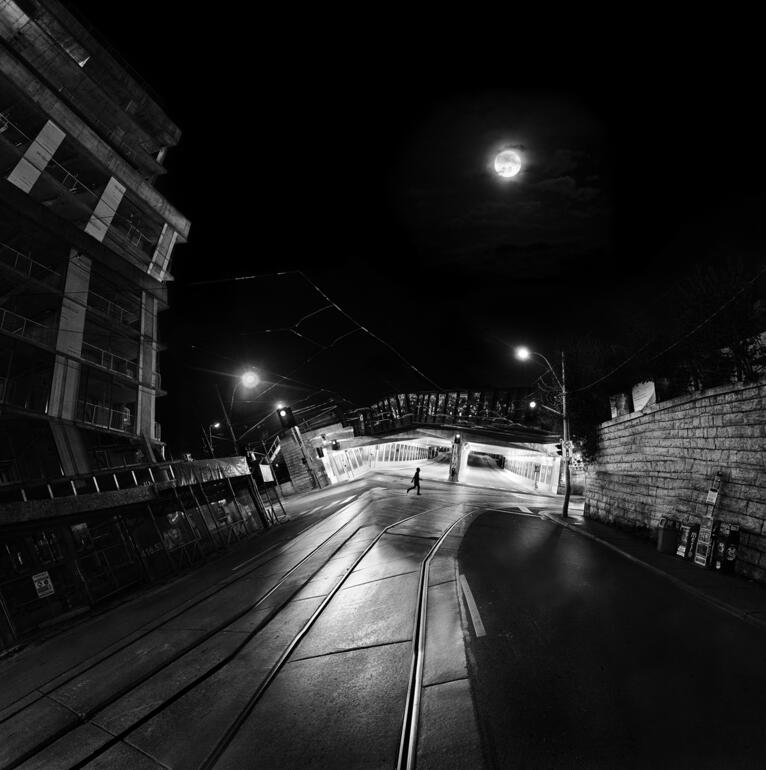