Engraved shells from 500,000 years ago are the oldest “human” markings that have been found to date. It is theorized that the shells were carved by Homo erectus, the earliest identified “upright man,” who roamed the earth from 1.89 million years ago until 110,000 years ago.

Cave paintings, figurines, and beads and shards of utilitarian objects, incised with drawings and markings, from the upper Paleolithic (40,000 years ago) to the Mesolithic (8,000 years ago) show that from the beginning of humankind, we expressed ourselves through symbols, and that these early man-made symbols are evidence of the evolution of human consciousness. A symbol is an expression and an understanding of a thought, an idea or a belief.

The evolutionary timeline of human consciousness is continually under debate. Studies show that primates have awareness, knowledge and intention, but lack understanding of belief systems. Human consciousness led to abstract thoughts, which were expressed in symbols, and symbols eventually led to written language, developed only 5,000 years ago.

The development of spoken language is described in a number of mythologies. The Aztecs believed that a dove brought language to its first generation of children but gave each child a different language, and thus they could not understand one another. The Tower of Babel myth asserts that each construction worker of the tower was suddenly bestowed a different language. Because of this, they could not communicate with one another in order to finish building the tower, but instead abandoned the tower and went off in different directions to populate the world with their languages.

Despite these various languages, all humans understand language-less symbols. Symbols are understood both consciously and unconsciously. The Attention Schema Theory (AST) speculates that the human brain evolved out of the necessity of sorting “too much information” into usable chunks. Much of the sensory information that we receive through sight, sound and touch is channeled automatically into the unconscious brain, where it is directed into the appropriate “department” for retrieval or burial, depending upon the event and its usefulness to our survival. Many symbols reside in the unconscious as a sort of lexicon of experience or belief.

When we are born, we are thrust into a cold, bright, noisy environment that we are profoundly helpless to navigate. Consciousness and unconsciousness have not yet separated, and the senses assault us with information. But the transformation of the brain into an efficient filing system develops quickly, during sleep. It must do so for the organism that is us to survive.

What the brain cannot do is say no to information. All information goes in whether we like it or not. This is how memories, both bad and good, are imbedded. The brain is both a slave and a slave-driver. The brain does not discern; the brain will automatically bury memories that threaten the organism’s survival. The theory is that deep REM sleep, and the dreams we dream in REM sleep, serve as data-storage for our brains. The human condition proclaims that we are not masters of our destinies, but servants to our pasts. We are not only the sum of our own pasts, but in all of humanity’s past—and this past is imbedded in our unconscious.

Our unconscious is the history of consciousness itself. The unconscious is the reservoir from which we draw all that is us. But how did we get here from there? The psychology of the mind, and behaviors the mind can elicit, was observed during Egyptian times, found in the Vedic scriptures of Hinduism, and was the basis for ancient Greek philosophy. Psychology, or the scientific study of the mind, is dated to the early 19th century in Germany, although its evolution stretches back further. Shakespeare (1564-1616) was particularly attuned to workings of the human mind and its behaviors, but the development of a methodology to analyze a person’s unconscious is credited to Sigmund Freud and Carl Jung in the early 20th century.

It was Jung that recognized that the language of the unconscious was most often expressed through symbols, and that the symbols could be both ancient and universal and appeared to be the language of what he termed the “collective unconscious.” Jung discovered a person’s dreams were a combination of personal experience which were often expressed through ancient symbols.

For millennia, artists have used symbols to express an idea or an experience. The symbol can be cultural, such as Warhol’s Campbell’s soup can, or deeply personal, such as Agnes Martin’s grids. Renaissance art is filled with symbols; Surrealists made the symbol itself the subject rather than using it as a lexicon to the image.

A fascination for mirrorlike reality came into vogue with the invention of photography, yet the very first photographs are peopled with phantoms and ghosts. The earliest photographs required long exposures, and any movement was captured as a passing shadow. This “flaw” was quickly exploited by Victorian artists such as Oscar Gustave Rejlander and Henry Peach Robinson, whose photo-montages and multiple-negative printings featured moral tableaux or captured the soul escaping the body of a dying young woman. The famous Cottingley Fairies photographs that so entranced Arthur Conan Doyle are still used as examples of photography capturing otherworldly phenomena.

This ability of photography to alter reality was fully exploited by the Surrealists in the 1920s and ’30s. Man Ray, Herbert Bayer, Dora Maar and others paved the way for photography to express the psyche. In the late 20th century, artists such as Jerry Uelsmann took the photomontage to new levels while artists using digital photography, manipulated lens-based images even further.

Today, the photography world is rife with manipulated photographs, but creating a meaningful image is what distinguishes superficial visuals from art that inspires dialogue. The work of Catherine Carter combines symbols described in Carl Jung’s theory of the collective unconscious, the writings of the great mythologist Joseph Campbell (1904-1987) and her own personal imagery to create photomontage dreamscapes that are both mysterious and familiar.

Carter’s images are created from a well of prehistoric symbols evolved over millennia and that reside in the collective unconscious. Carl Jung was the first to recognize the universality of symbolism as the language of the unconscious, and this was further advanced by Joseph Campbell’s study of myths, which his book, The Hero with a Thousand Faces, explores in depth.

Growing up with a father who performed readings of fables and fairytales, Carter’s childhood was filled with vivid stories set in the ancient and magical world of myths. These stories were reenacted in theater pieces that she and her family created, replete with costumes and props.

Having studied fine art in college, Carter eventually set up a photographic portrait studio where her skills as a photographer and an image craftsman were honed. By the time she closed down her studio and returned to her personal work, she had a quiver full of arrows and a target: to create images that would resonate with viewers both visually and psychologically.

Carter’s photomontages create puzzles to be explored. Like Rorschach tests, they can mean different things to different people. But all of her images illustrate a journey that moves toward a discovery through symbolism. By overlaying image upon image, she creates dreamlike sequences that evoke ancient myths and personal memories.

The image “Find Your Light” features angels embedded in a tangled web of branches surrounding a female figure with a torch of five flames that lights her path through a dark forest. The number five is a symbol of stability, indicating the balance between the spiritual and the material. In the tarot deck, it is represented by an angel and signifies individualism and courage.

In “Seeker,” a woman in a dark hooded robe gazes pensively at something outside the picture frame that we cannot see. In her right hand a crow is perched. The crow symbolizes many things, both positive and negative, and Carter uses it repeatedly in her images. The crow represents the mystery of creation as well as destiny and personal transformation. The crow is intelligent, fearless and audacious. Because of these traits, it is often used as a spirit guide.

The moon is also found in a number of Carter’s images. Throughout human history, the moon has represented the feminine and the realm between the conscious and the unconscious. Each phase of the moon represents a stage of life. The new moon signifies new beginnings. The waxing crescent moon indicates intention. The Gibbous moon represents refinement while the full moon is maturity.

“Gateway” and “Floating” both illustrate dream states. “Floating” features a sleeping woman interlaced with a jellyfish. Jellyfish are ancient spirit animals and indicate that the dreamer should trust their heart and follow their emotions. The jellyfish is a powerful symbol of the survival instinct. Jellyfish are prehistoric animals thought to be older than the first dinosaurs. People who dream of jellyfish, or whose spirit animal is a jellyfish, have a strong survival instinct.

“Gateway” perfectly illustrates falling into a dream state. When we fall asleep, we often feel as though we are floating backward. This dream state is our only entry into the unconscious, where the language of symbols illustrates our own personal journeys and experiences. Dream analysis then interprets the signs of direction we see in our dreams, but we must pass through a gateway into the dream.

With reference to her process, Carter notes, “My ideas or themes are usually aroused by a word or a phrase that becomes embedded in my thoughts and inspires me to explore the feeling more deeply. This often begins though notes, journaling or loose sketches. As my concept begins to crystalize, the elements begin to find each other and the story narrative becomes clear.

“I use images from my own digital or scanned negative files to construct my narrative and often work with models that represent the protagonist or hero in my story. When I am looking for new photographic images, I am drawn to mysterious spaces, which become the backdrops for my tableaux.”

Each of Carter’s images processes layer upon layer of interpretation and meaning, which make the works so fascinating. “Where once I constructed my photomontages in a conventional darkroom, I now find that digital workflow gives me more options in composing my stories,” Carter explains.

“Because some of my strongest memories are of studying the illustrations of Arthur Rackham in my parent’s Grimm’s Fairy Tales book, I try to emulate the look of an etching or a photogravure by using texture screens and sepia tones.”

Each one has a different story to tell: a fairy tale, a myth, a personal story, a dream. These are photographs that never get old, yet are already ancient.

“Your visions will become clear only when you can look into your own heart. Who looks outside, dreams; who looks inside, awakes.” —Carl G. Jung

Addendum
All works copyright Catharine Carter. See more of her imagery at catharinecarter.com. 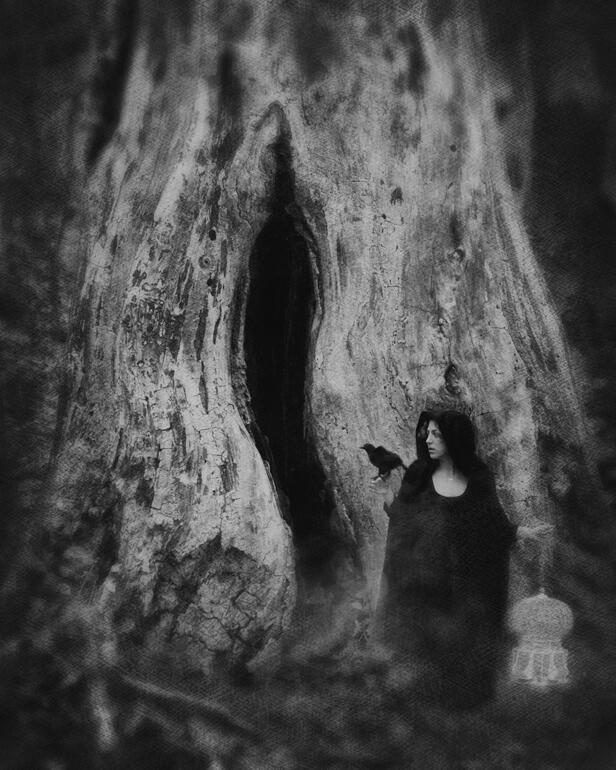