Like a 1,000-piece jigsaw puzzle, our lives often play out in unanticipated permutations. We open the box and proceed to turn the pieces over in a methodical and strategic protocol to best achieve success. Locating the straight-edged pieces to form the border, we begin to build the interior design. Separating the pieces according to colors, patterns and shapes gives an informed sense of how the photograph on the cover of the box can most easily be achieved.

But what happens if the photograph on the box has been mistakenly replaced with the image for a different puzzle? How do we proceed to understand the organization we’ve already completed? At what point does entropy, frustration and desperation surface as we realize we’ve lost critical reference points? Do we swipe exasperated arms across the table, tossing everything in the trash bin?

Fine art photographer Carol Erb recognized no necessity for dumping the puzzle; rather, Erb chose to reinvent the cover photograph for the puzzle and proceed with confidence that the pieces will eventually come together successfully.

Erb attended the School of the Art Institute of Chicago, concentrating on painting and illustration until she “realized that becoming a working artist was not a realistic objective. I needed to get an education that would lead to an occupation that would support me. My father was a CPA, so I think I inherited a bit of his affinity for numbers.”

For almost 20 years Erb worked at a large bank as a financial analyst focused on pension benefit funds. “I outsourced and reviewed all accounting, legal, compliance, insurance, investor reporting and property management.” Though the pieces of this established career path seemed to fit together nicely with her marriage, eventually the puzzle found its organic conclusion when Erb and her husband relocated from the Midwest to Los Angeles. Erb seized the opportunity, retired from the financial world and realized that she had a table full of pieces waiting for her to make into a coherent image.

A “one day at a time kind of person,” Erb imagined that her retirement years would be spent in adventure travel; she’s always loved hiking, climbing, skiing and most anything outdoors that’s active and fun. Embarking on the challenging path of fine art photography could not have been further from the chapters she imagined.

Erb recognized that her newfound lifestyle and freedom provided another unexpected piece of the puzzle to fit into the tapestry of her life. Here was an opportunity to explore that original passion for art she had abandoned so many years ago. Though she candidly admits that she never thought of herself as an artist—“It was never easy, never loved it, and it got me very frustrated at times”—that all changed once she began using a camera and enrolled in a class taught by Aline Smithson at the Los Angeles Center for Photography.

Smithson is a highly respected photographer, educator and founder of the online fine art photography journal Lenscratch. Erb soon enrolled in Smithson’s “The Next Step 1” class, followed in quick succession by “The Next Step 2,” “Shooting with Intention” and “Personal Project.” A mentorship and friendship evolved between the two women and the puzzle pieces began to coalesce.

Smithson appreciates Erb “as a visual artist and a bit of an enigma able to navigate humor, pathos, anxiety and beauty in a single photograph. She deftly shifts our thinking as she constructs the familiar into new realities. Each of her projects re-evaluates how we consider space: from confinement to expansive worlds that are sometimes mysterious and ominous. Her construction keeps us in an off-kilter state where we are not quite sure what is real and what is manipulated. Her series Reckoning plays with our fears as she draws us in with sumptuous landscapes and environments, only to reveal that nature sometimes has the portentous upper hand.”

Erb is a fearless artist combining the wider perspective of life experiences and a passionate artistic journey that began as nothing more than a hobby. “I didn’t envision that I would ever be featured in magazines or have my work in galleries. One thing just led to another, without any real foresight or planning.”

The construction of a career—parallel to the protocols of jigsaw puzzling—typically requires a formality and sequence of decisions. In this second decade of the 21st century Erb provides an astute voice.

“Fine art photography has traditionally been dominated by men, but that is really changing,” she notes. “The vast majority of my peers today are mature women. A lot of us are wives and mothers that now have the time and money to follow our passion to express ourselves using photography. Most opportunities for emerging photographers are based on a ‘pay to play’ system that I think plays a bit unfairly to younger artists without the financial resources to attend photography review events, or even participate in juried shows. I’ve recently joined the board of directors at a nonprofit photography center, and one of our missions is to work on giving younger artists more support and exposure for their work.”

Reckoning is a provocative title for the series represented here; the definitions and grammatical implications of the word offer a wide range of interpretations. Erb states definitively that it is a biblical reference. Furthermore, the images in the series relate directly to the political environment following the 2016 presidential elections. Though Erb does not consider herself a “religious person” or a purely politically motivated artist, she firmly believes that “the cornerstone of the evolution of western culture is the Bible.”

It is more than intriguing to understand the title on multiple interpretative levels wherein “the political, cultural and environmental sins that are committed will come back to the perpetrators. There is a price to pay for folly. I wanted to illustrate the effects of climate change and natural disasters as a metaphor.”

Deciphering her conceptual visual strategy, Erb typically begins with a landscape as the base photograph to which is added the main subject. “Intuitively the incorporation of trees, rocks, water, fire and lightning follow from my library of assorted images. I work in a very instinctive manner, and a well-defined idea of what the final image will look like is not formulated at the start. Any imagery that does not get incorporated into the final image is put into a separate file to be cannibalized for future projects.”

A glorious full moon reflects on the surface of a natural disaster in “Flood Stage.” Dark night, flames and white smoke emanating from a hillside of homes in “Inferno” evoke destruction of personal dreams and shattered lives. “Tempest” references the Bible’s great flood, erasing the hopes, dreams and existence of humanity.

These are highly composited visual amalgams of personal, psychological and universally haunting references. Erb’s seamless digital prowess is most convincing via the composition of the images. Wandering from personal nightmare to a larger external world filled with devastation cloaked in pleasant tonalities and flawless symbols, these allegories of disaster, obliteration and recklessness define the “reckoning” we all must confront.

Erb’s own words incisively illuminate her work: “Most natural disasters happen suddenly and violently. For ‘Flood Stage’ I wanted to show the eerie quiet of the aftermath. As with most of my images, these houses were photographed in daylight, then digitally altered to look as though the scene was photographed at night. The water, moon and trees came from other images, and the house reflections were digitally manipulated layers of the homes turned upside down.”

The image “Inferno” is a policy statement relating to the subjects of politics and environmental change. “Living in Southern California, wildfires are a constant threat and are becoming more frequent and intense,” Erb says. “Although the houses pictured in ‘Inferno’ were shot in Alaska, the pyramid shape of this cluster told a better visual story of multiple homes on fire. One house has been spared from the flames, alluding to the seeming randomness of nature.”

Created from an impressive archive of digital photographs captured over just the past few years (stock image files are not engaged in the final imagery), Erb sets out to explore journalistic commentary and editorial illustrations within the expansive freedom of the digital darkroom.

In contrast and relief to atmospheric images of disaster and threat, Erb concurrently threads peaceful, almost tranquil scenes. “Big Old Tree,” “Hollow” and “Warren” provide interludes that reference hidden secrets of mysterious landscapes. Though these images appear to be straightforward landscape photographs, like each of the other members of the Reckoning family, they are also the result of digital darkroom strategies.

In “Big Old Tree” Erb describes her “love of trees, especially big old gnarly ones. This dead tree was in the woods behind my mother’s assisted-living facility. Each time I would visit her, I’d try to find this tree. Maybe it reminded me of her; twisted and decaying. After she died, I went back to photograph the tree. It’s a symbol of mortality and loss.”

The tranquility theme continues in “Hollow,” which is “one of several images that show a peaceful interpretation of natural beauty free from impending danger.” Erb included these scenes “to communicate that nature is all powerful and healing and that the folly of man, in the end, is no match for its supremacy.”

Erb returns to posing questions in “Warren,” which, on first viewing, is a puzzling yet simple photograph of underbrush concealing an entrance to an unknown region within tangled branches. “As long as I can remember, I have fantasized about living in the woods,” she says. “My husband and I hike on the mountain trails near our home frequently. One day I noticed this gap in the overgrowth between two outcroppings. Beyond it was a narrow path. After making the initial photograph, I added more branches and darkened the opening to make it look like the entrance to a warren. I want to appeal to the viewer’s desire to find out what is in the warren; is it a place of comfort or danger?”

Harbored within the answer to this visual dilemma are clues which define the wide-ranging and meteoric appreciation for Erb’s fine art images. She has been the recipient of numerous awards, solo and group gallery shows and prestigious publication interviews. A visit to her website reveals that the past few years have been productive and accomplished by any standard, especially for someone considered a late entry into the highly competitive niche of fine art photography.

In 2015 Erb was interviewed by Alyssa Coppelman for Adobe Create Magazine. Regarding Erb’s color project “Dominion,” Coppelman is fascinated by how “elements of fairy tales and the wild kingdom communicate something deeper about the relationships between humans and wild animals.” It is a convincing body of color work that amplifies Erb’s mastery of lighting, concept, composition and execution.

Circling back to the jigsaw puzzle metaphor, it’s easy to see how Erb fits the pieces together in pursuit of evocative and thought-provoking visual solutions. The 1,000 jigsaw pieces waiting to be interlocked are no match for her imagination and instincts.

Addendum
See more Erb’s Reckoning series, as well as her other projects, at carolerbart.com. 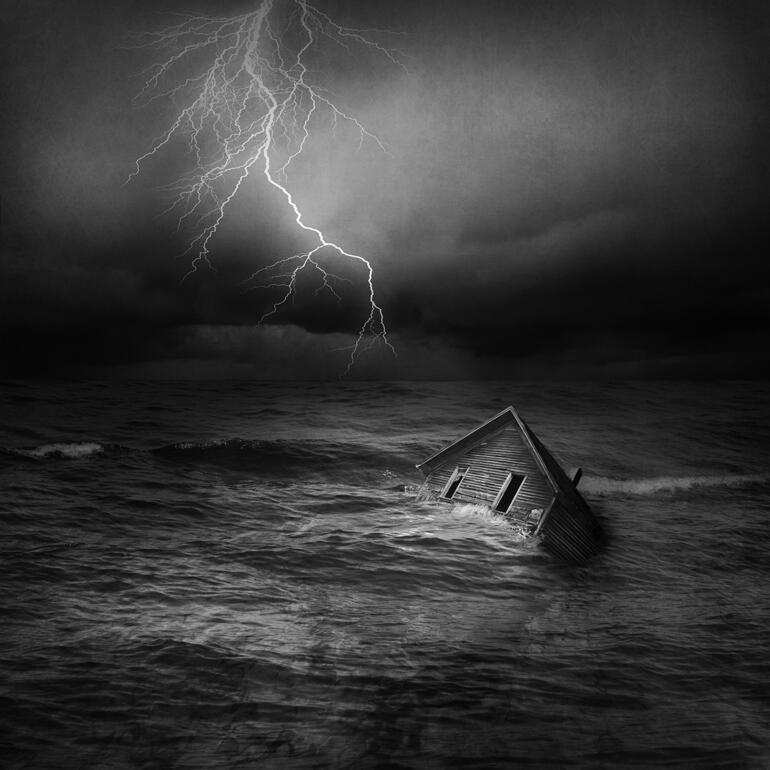