I like to look for that spark that gives people their individuality,” says Argentinian photographer Carlos Rozensztroch. “I believe in total equality and freedom for all of humanity. I am deeply convinced that this is possible. I want to show to as many people as possible the value of all humans, and the injustice that dominates the societies in our world.”

It’s possible that Rozensztroch was born with this politology burned into his DNA. His father escaped from Europe before the Nazis occupied Poland, selling his stamp collection and an Exakta camera to pay for passage to South America. Later, he instilled in his son a deep curiosity about the natural world, and gave him a camera to capture the people he met. “I don’t think that what I experienced was precisely scopophilia,” Rozensztroch muses. “But since childhood I’ve had an enormous interest in people’s faces, and in how those faces could tell me what to expect from them.”

Flash-forward half a century—past a medical degree, a wife and children and a general practice in psychiatry and psychoanalysis. “I was fully dedicated to my profession and raising my family for the first half of my life,” Rozensztroch says. “My artistic point of view was renewed at the age of 57 when my friend Ricardo Martiniuk challenged me at a Psychoanalytical Congress in Colombia to take up the camera again with a renewed vigor and purpose.”

The subjects Rozensztroch prizes most are the time-carved faces of the people he meets during his travels. His portraits evince his strong empathy for the people regardless of their appearance. He likes quoting Rodin on the idea of beauty: “To the artist there is never anything ugly in nature.”

“I enjoy looking deeply into what makes other people tick, which I believe gives me more insight into my own existence,” Rozensztroch says. “I have a great love for all people, without discrimination. I hope my work can spread my message as widely as possible—we are all one family of humanity. I derive inspiration from the great Brazilian photographer Sebastião Salgado. His black-and-white imagery shows us how artistic documentary photography can be. I like color, but I don’t see the need for color in the vision of the world I wish to share.”

The images presented here are from a project Rozensztroch calls “Glances From the Whole World,” in which he strives to show the deep connection that’s possible between a sincere photographer and people from­­­­ diverse places and circumstances. His work aspires to underline the fact that we are all created equal, and that we all share a common spirituality, as well as the common foibles and idiosyncrasies of being human.

Rozensztroch brings to photography his lifelong interest in the human condition, informed by a deep psychological understanding of the human psyche. He believes that photography affords the opportunity to see others on an equal footing, to share an intimate moment with a stranger, which is something we all desire. Photographs of such encounters can tell as much about the photographer as his or her subjects.

“I take many photographs on travels with my wife,” Rozensztroch says. “I leave much to chance, often being surprised by what I find. The main thing that produces a good photograph, I think, is when I have some kind of connection with a total stranger, and we can enjoy our short moment together.

“I remember once meeting a bearded man in Tenerife, in the Canary Islands, and explaining to him, in my best Spanish, that it would please me to take his photograph. He seemed very happy to pose, then told me in perfect German that he didn’t understand a single word I’d said. We were two strangers, without a common language, yet we had this beautiful little interaction together!

“Another time I asked a poor man in Brooklyn the same question: Might I have the pleasure of photographing him? He replied, ‘One cigarette, one photo. Two cigarettes, two photos.’ So I bought him a 10-cigarette box.” 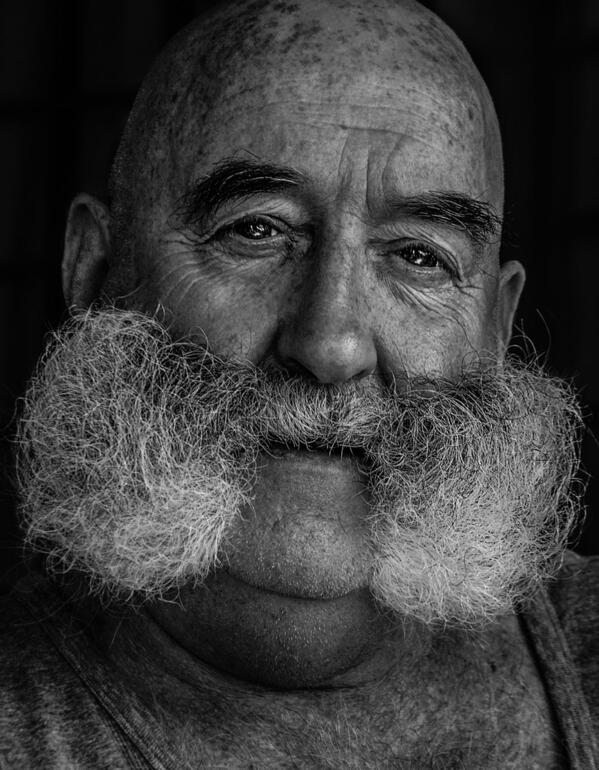