Can you make a portrait of someone without showing their face? Asked from another angle, can a hand be more than a hand? Anne De Geer’s recent series answers these questions “yes” and “yes.”
“I have always been fascinated by the human hand,” the photographer asserts. “A fantastic tool in all respects. Beautiful, ugly, sensitive and sometimes even threatening.”

Perhaps hands are the most effective stand-ins for faces. They are as expressive and labile as a face. They articulate our intentions and willed engagement with the world. Hands convey our character in a delicate, coded language. Perhaps, as Immanuel Kant put it, “the hand is the visible part of the brain.” That’s another interpretation.

Somewhere between face, brain and figure seems to be the location for the hands in this portfolio. There’s not a “hand model” hand among them. (De Geer usually employs the non-professional hands of family and friends.) Some flesh has been pounded, gloved or gripped into its form. Some hands fold and crease in unanticipated ways. Muscle, sinew and usage over time have built these hands, not desire for esthetic perfection.

The work they do here is at the photographer’s behest. We are witnessing performances. De Geer’s cast of hands appear in situations that are not always innocent or comprehensible. A young woman’s hands—the least weathered of all—cradle a bisected fruit. Bare hands cautiously grip barbed wire. A strong hand protrudes assertively from between hard, angled walls.

Can we read anything into these relationships between hand and ground? Without the more familiar mooring of a face and body, the hands take the lead. It’s tempting, though, to seek stories. Is that hand between the walls pushing apart, pulling inward or climbing out?

By way of example, note the young woman’s fruit-grasping hands, the only ones here accompanied by a fragment of face. The general spell of De Geer’s hands is nearly broken by those lips, the pair a sly reminder of the evocative, seductive character of a face. We desire more information from these images, and we are left to ponder uncertainty.

There’s a delightfully complicated relationship suggested by the image showing two bodies, shadowy and initially indiscernible along the vertical edges of the photograph. This one has the frisson of touch, a surprise to realize how the effect shifts when a second person enters the frame. A circuit forms and carries charge. Thumbs nuzzle up to each other, changing from inert to alert. We become instantly aware of the pairing, and what it implies about the participating hands, arms and the bodies they extend from to join mid-frame.
De Geer’s hands enter into agreements with nature. Tree trunks and limbs are easy companions for hands, yet there is character in these relationships. A rough-barked tree hugged by rugged hands. Another tree, dark, smooth and flecked with moss, admits a grudging resemblance with a bare forearm, its pale, shrunken third cousin twice removed.

Each of De Geer’s images feels complete in itself. There’s no need for an overarching narrative. A statement is made, though deeper meanings are left to the viewer’s interpretation. The series feels open-ended and relaxed, although the barbed wire image in contrast bristles with potential pain. That sensation notwithstanding, we can envision new images coming to land amongst these moments.

The photographer values several things about her life in Linköping, Sweden. First, she has access to medium-format Tri-X film and enough gelatin silver printing paper to continue working in analogue black and white. Second, she maintains community by sharing her darkroom with two other photographers. Third, she is attracted to midday sun. Though most of her work is made indoors, she likes to take a friend on a walk and spontaneously create hand images.
Despite that love for midday sun, there are minimal harsh shadows or severe contrasts evident here. De Geer’s point is hands and their nuances. There’s sufficient, satisfying drama in that material. No need to shine spotlights at it.

“I have always been fascinated by the human hand. A fantastic tool in all respects.” 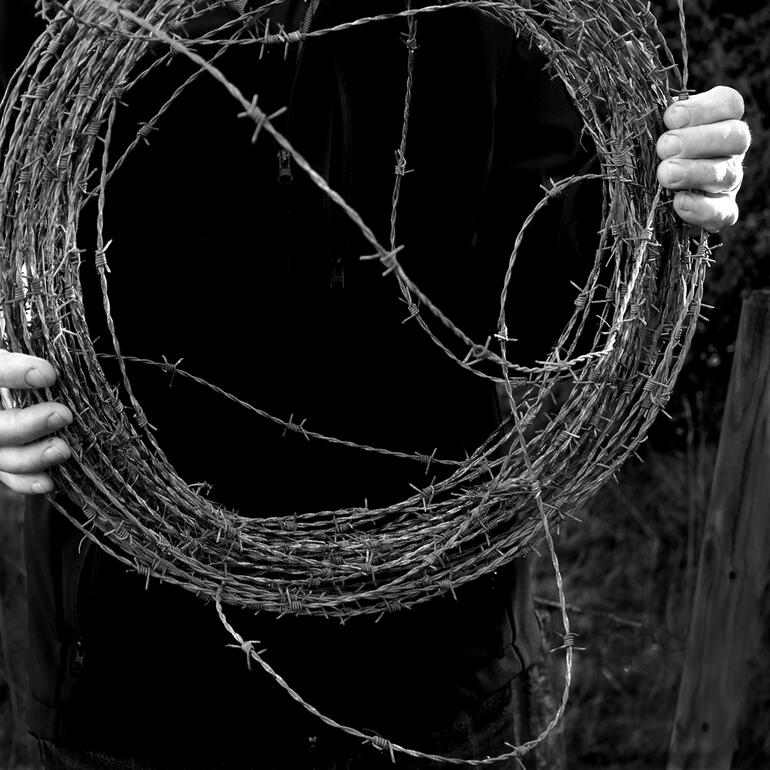