By way of introduction, I will mention that Andrea was raised in an Italian Catholic family in Brooklyn. (She had, under those potentially constricting circumstances, “the good fortune of being taught morality and compassion more than mores and catechism,” as Maria Morris Hambourg wrote.) She received an MFA from Yale in the mid-1980s and a Guggenheim Fellowship a decade later. Her work is, quite deservedly, held in numerous museum collections.

Her photographs never cease to intrigue me. For her, the 8 × 10 camera is like a point-and-shoot with a genius IQ. Her facility with her tools is wondrous; I often ponder the load of film she brings along on her travels, as so many of her photographs do have the off-the-cuff feel of someone not afraid to shoot a lot. But it may simply be that she is willing the casualness. Making us believe that everything we see is effortlessly obtained. (I remember Linda Connor observing that despite the celestial, pacific nature of her work, while she’s making it she’s often cursing, sweaty and anything but serene.)

Despite what I would cheerfully call her antic personality, Andrea’s photographs slow time in a generous embrace.

Andrea has a sorcerer’s gaze that confounds time. She twirls substance out of ether like a potions master, or, more prosaically, like the cotton candy conjurer hawking sweet, wispy fluff at the fair.

An esteemed photography curator once said that despite the overt subject matter of his best-known photographs, Ansel Adams wasn’t photographing mountains. Rather, he was photographing weather, the range of light and atmosphere that bring drama to his landscapes.

To my eyes, Andrea is photographing space, the air that shapes and enfolds her subjects. She knows the perfect amount of air to surround and hold them. Her use of the large-format camera, and small prints, emphasizes the intimate exploration and close attention of her goals. One should note that her platinum-palladium contact prints are approximately the same dimensions as each of this magazine’s pages. The 8 × 10 negative holds a crap-ton of pixels, if you’re counting.

She rarely seems preoccupied by subject matter as an end in itself. Over the quarantine months she has made eloquent images of cardboard boxes emptied and left to weather on her driveway, taking what’s delivered to her door as material for her photographs and icons of place and time. (What’s the opposite of anachronism? Modernity, I suppose.)

There’s a pulse to each of her pictures. Not only does she depict the air around her subjects, she captures the breath of living things (and that of her viewers as well). The large-format camera is well-suited for this task. Shallow depth of field, selective focus and often necessarily long exposures in combination describe spaces of respiration. It would not be unheard of for one to be able, during one of Modica’s exposures, to take in and release a breath.

Dead things, because they’re dead and have no more breath, are often seen in her photographs in simple, factual honesty. Sharp and still, in other words. Relying on a different facet of photographic syntax. Willing participant becomes inert object. Collaborator becomes thing. The photograph reassumes its “still” label.

And still, she persists.

While Andrea at times has a clear, explicable and succinct focus on a project (Treadwell, baseball players, human skulls, friends, mummers), she is more apt to put instantaneity ahead of itemized intention. She knows she’s after something, though it’s taking the photographs that effects her realization.

Her images often embody something bound to happen—a moment of apprehension, an immanence of force, or the aftermath of something transformational.

For all the “calm” that the large-format camera stereotypically creates, her photographs always, to me at least, suggest motion. Even if it’s only the chest rising and falling with breath. Precarious balance and its unlikely forms in space.

Light and shadow have material presence. They are shaped and dynamic and along with air they play leading roles in every image.

To cite just one example, there is a photograph in this portfolio that shows a baby enwrapped in an unlikely number of hands. Andrea takes a fairly familiar family photograph trope and complicates it. I find myself counting fingers to make sure they’re all there, just the right number, not too many.

As typical with Andrea’s images, there is very limited presence of temporal evidence here. Nothing digital, scarcely anything plastic aside from an anomalous wrist brace, attached to an arm that extends off frame right, that arm that seems to be preventing a young woman from toppling leftward. As Jeffrey Hoone wrote for a 2001 exhibition catalogue of her work, “This timeless quality is an essential clue for entering her work. She is not telling us some specific information or showing us how something looks; she is inviting us into what she describes as a selfish process of risk and reward.”

As We Wait is the title of a book of Andrea’s work published in 2015. The lyrical druid and photographic artist Larry Fink had the enviable opportunity to curate the book from Andrea’s photographs—and it feels truly curated, not simply picture-edited, in large part because of the spaces shaped and sequenced for the folio.

I would love to have scores of her platinum prints laid out on a table in front of me. I can see image-forms flowing in glowing, gelatinous fashion out across others. Little conversations with sly nudges and winks happening between prints. A couple uniting, then floating elsewhere, drifting apart. The photographs I’m seeing on that table are moving.

“There is nothing more exquisite,” Fink wrote in As We Wait, “than to be given the freedom to interpret another artist’s vision.” To introduce it to new shape.

As suggested here, there have been many exquisite things written about Andrea’s work, and I would be remiss if I didn’t mention at least a couple of them that amplify and articulate my own appreciations. Hoone, the director of Light Work in Syracuse, NY, made two statements in that 2001 publication; the second concludes the essay:

“The territory that Modica covers in her work has been visited by many other photographers. Most are drawn to certain genres like landscape, portraiture or narrative constructions in order to explore or celebrate specific passions, interests or points of view. Throughout her career Modica has looked at those same genres only as a starting point to explore the unknown in the process of making a picture. While her techniques may be straightforward and time-tested, her pictures reveal that her clearest expression is realized in those moments where we all might be expected to lose control.”

In As We Wait Larry Fink offered another gem: “Mystery pervades but the images are not about mystery; that would be a supercilious intention. Modica doesn’t dwell on anything trite: she gets right to the point…But what is the point? The viewer is constantly suspended between future tense and past dread, between a sensual lust and a limpid patina.” Alternately charged and spent, I would concur; the point is moot.

Another eloquent writer, E. Annie Proulx, echoed (patiently and unwittingly anticipated, to be honest) my own sneaky little adjective when she wrote, in her introduction to Andrea’s classic Treadwell (1996), “nothing is overt in Modica’s sly photographs.” A concatenation of phrases from the book bespeaks the novelist’s incisive skill in the face of Andrea’s delirious visuals. Her photographs are, or have: “fragments of a place, people and a time in her eye’s life”; “caught moments in lives ruled by hard situations; there are possibilities of anything”; “a sense of breathing, scratching life, of inchoate longing and suppressed anger.”

One final quote, from the scholar and curator Maria Morris Hambourg: “Modica’s art is about important and solemn events—those internal, molding moments we are mostly powerless to hold or to articulate.”

As a writer on photography, and someone who has witnessed this work grow and evolve, I deeply appreciate the fact that Hambourg wrote this some 25 years ago, and that it continues to capture the edgy yet dreamy energy of Andrea’s vision, off at the fringes of control.

Addendum
All works copyright Andrea Modica. To see more of her work, visit andreamodica.com, and instagram.com/andreamodica.photo. 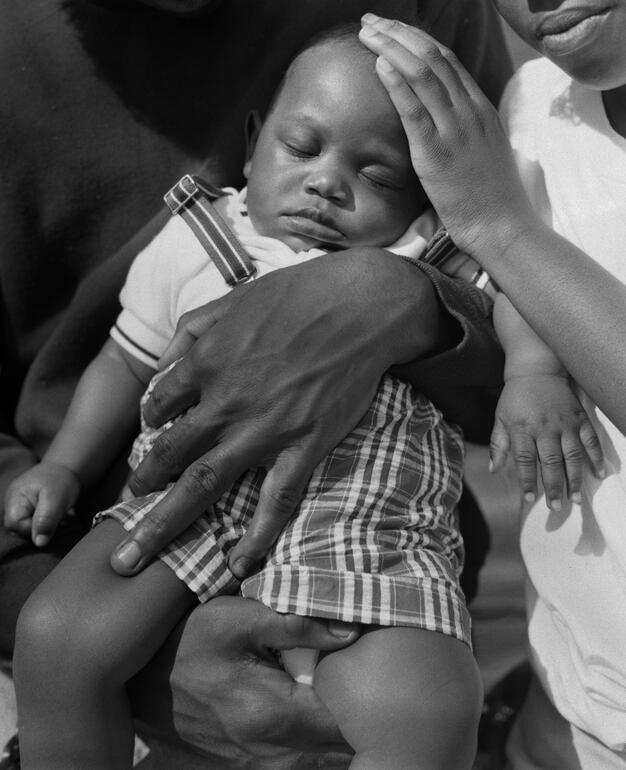