Among the more noteworthy exponents: Eugene Atget, who documented the rapidly changing face of Old Paris from 1898 to 1915 in the midst of the city’s radical physical transformation. Walker Evans, who spent weeks living with Alabama sharecropper families in 1936 to chronicle the economic and social effects of the Great Depression. Tony Ray-Jones, who devoted the years 1967-1969 to capturing unique aspects of the English character that would result in his iconic book A Day Off. And, of course, W. Eugene Smith, who made a career of the lengthy, deep-dish photo essay.

Which brings us to the individual that many consider the foremost practitioner of such long-term photo projects, Anders Petersen. The Swedish photographer, born in Stockholm in 1944, shares with the names cited above such tangible qualities as compositional skill, tenacity and singularity of vision, but differs in certain respects with regard to his objectives. He’s not concerned with preserving a record of places and people at a particular point in time, as was Atget. While he shares with Ray-Jones an interest in capturing people’s behavioral characteristics, he does so in a darker, less humorous vein. And whereas Evans and Smith often depicted their subjects in easily understood symbolic terms, the people in Petersen’s photographs emerge with greater ambiguity and individuality.

Even more intriguing is his assertion that his pictures can almost be regarded as being incidental to his concerns. For Petersen, the act of taking photographs is as much a voyage of discovery—both of himself and others—as of self-expression. He has a desire to get close to other people, to develop rapport and communion. “For me, photography is not so much about photography,” he says. “I try to be unguarded and innocent when shooting. The meeting must be mutually interesting for me and the people I meet. My approach is rooted in intuition rather than conscious reasoning.”

Throughout his life Petersen has sought meaningful encounters with people from every type of background and social level. Sometimes that includes those on the so-called fringes of society—pimps and prostitutes, alcoholics and drug users, criminals and con men, inmates of one kind or another. But regardless of their social positioning, all are subject to universal longings, dreams and vulnerability. Many bear indelible marks (visible and invisible) of hard experience. To look at his images is to see a fascinating cast of characters living fatalistic Journey to the End of the Night kinds of existence à la Celine, or charting transgressive life paths out of a novel by Genet.

Petersen, in sharp contrast, is the product of what he calls “a bourgeois and privileged upbringing.” He recalls his family moving frequently, always somewhere out in the country, and spending hours wandering through forested areas in a kind of dreamlike reality. He sought some kind of connection, primarily emotional, through early attempts at painting and writing, but found these pursuits too lonely. “I wanted to be creative, meet people, have adventures. Photography seemed to offer a path to all three.”

Inspired by the postwar documentary tradition, Petersen enrolled in 1966 at the Fotoskolan Academy in Stockholm co-founded by the preeminent photographer Christer Strömholm, but not before indulging in a little rebellious behavior of his own. “For months, I illegally used the lab at the photo school after closing time, developing film, making prints, and making mistakes.

“One night at 3 a.m. I heard someone knocking heavily on the door, which I didn’t dare open. Officially I wasn’t there. But the knocking resumed, and grew louder, so I finally opened up. Standing there was a man with no hair, big eyes and gold ring in his ear. That was Christer Strömholm, the head of the school. He looked around and saw the mess I had made, but asked only to see my pictures, then told me to see him the next morning in his office. I thought I would surely end up in prison, but instead he asked if I wanted to join the school, and so I did. Christer not only became my teacher, but also a friend.”

A charismatic figure, Strömholm’s choice of subject matter must have seemed fascinating to the younger man. Strömholm had photographed transsexuals in Paris in the 1950s and early ’60s—hardly what one would call typical documentary fare during that era. His approach was intimate and unflinching, but always respectful and compassionate. “His personality was electric,” Petersen says. “He saw my weakness, but believed in me and trusted me. He was a warm man with intelligence and humor. He influenced me a lot.”

Petersen throughout his career has also spent considerable time interacting personally and photographically with outsider cultures, with people who represent alternative models of self-identity and lifestyle. This tendency would manifest in what would become his breakout series on the Café Lehmitz, a seedy bar in Hamburg’s red-light district, although this body of work, like others, evolved more from happenstance than forethought. In fact, one might say that the café’s patrons helped bring it into being.

In 1967 Petersen traveled to Hamburg to photograph friends he had made there on a previous visit in 1961. He describes his memorable introduction to the Lehmitz: “The friends I had known were all gone, and some were dead. I felt sad, and didn’t know quite what to do. I ended up in the Scandi Bar on Seilerstrasse, where I met a girl I knew slightly named Gertrud. I asked her to help me out, and after three beers she said we could meet next day at 1 a.m. in a place called Café Lehmitz close to Zeughausmarkt. When Gertrud says one o’clock it is automatically during nighttime. I was there on time, but no Gertrud. The café was crowded with people, everyone talking, shouting and dancing. Good music from the jukebox—Fats Domino, Little Richard, Chuck Berry.

“I found a place at the corner of a table and set my camera on it. Immediately a stranger approached and started to talk about different cameras. We were drinking quite a bit and went to the bar for refills. Then some girls arrived and we started dancing, and I happened to realize that my camera was gone. Typical of me, I thought. Quite drunk and confused, I looked around and suddenly saw my camera in the air. People were taking pictures of each other and throwing it from one person to another. I insisted that since it was my camera, they had to also take a picture of me. They did, and threw the camera to me, and then I kept it. Gertrud suddenly came, two hours late. She thought it would be all right with the regulars if I continued shooting.”

Despite their differing backgrounds, Petersen’s new acquaintances quickly accepted him on trust and allowed him the kind of open photographic access they likely would have withheld from someone else. The patrons of the Lehmitz were completely themselves in front of his camera. Though their appearance and behavior may have seemed disconcerting to outsiders, they betrayed neither embarrassment nor self-consciousness. Instead, they conveyed a sense of emotional and spiritual liberation through a rejection of established social codes and attitudes.

It was a like a door opening just for him—the first of many. “The people at the Lehmitz had a presence and sincerity that I myself lacked. It was easy to be attracted to and identify with all of these special personalities. I found a great warmth and tolerance among them, and learned many things.”

The photographs Petersen took that night and on numerous successive nights are alive with an intense, hallucinatory quality that represented a new direction in the documentary genre. Despite their extraordinary quality, Petersen couldn’t find a sympathetic publisher until 1978. Nevertheless, the images generated considerable excitement in photography circles in Sweden and beyond, and served as a springboard for subsequent projects that evolved from a desire to see what lies behind that which we cannot see. This led to a series of photo essays that turned into books, each several years in the making, on people living in closed institutions: a prison, a nursing home for the elderly and a mental hospital. Each represented a new opening, a new chapter.

The prison project, Fängelse, came first, in 1984, not because Petersen was particularly interested in prisons per se, but because he could identify with the feeling of being locked in, whether the walls were physical or metaphysical. As per his usual MO, he didn’t use his camera right away, but took his time, went slow, cultivated relationships, kept his eyes and ears and other senses wide open. And learned from his subjects, the inmates, a different take on the meaning and nature of freedom, which he discovered can exist in a larger sense when one is locked away within four walls. A freedom that is bound up in dreams and longings.

In 1991 he began work on what would become Rågång till kärleken, photographing in an old folks’ home. (The title translates as “On the line of love.”) As one might expect, it was resonant with a sense of mortality, but for Petersen in an unexpected way. Although some 25 residents died during the three years he photographed there, their passing didn’t lead him to brood over his own mortality. Quite the opposite. “They were hidden people, sometimes with death close to them. When death is close, the urge to live the present moment becomes more intense.”

The third project in what by now had definitely taken the form of a trilogy, Ingen har sett allt (“Nobody has seen it all”), begun in 1995), did not, however, launch auspiciously. “In the beginning in the psychiatric institution I did everything wrong,” Petersen says. “I took pictures of the fighting, the shouting and all the trauma between isolated and vulnerable people, and ended up only with pictures of the expected surface. I felt ashamed and stopped shooting for four months. I had two alternatives: to go and see a psychiatrist myself or start over, but in a different way. So I bought an old Rolleiflex and got permission to stay there sometimes during nighttime. That was another opening. In the night I got close to the people living there, who shared their secrets and their strength. They became like a family. I learned that it was okay to feel desperate and to share this feeling with others.

“People often talk about being strong enough, but that’s a mistake. I learned that you must be weak enough to accept your limitations and your emotions, and innocent enough to embrace your confusion. You should not be afraid of being afraid. Fear is a springboard.”

This attitude helps explain why Petersen continues to find fresh insights into human nature with each successive body of work. He avoids limiting himself to a particular theme or style. Nor does he attempt to describe “reality,” which is nothing if not a subjective concept. If there is a throughline in his work, it’s simply being curious about himself and other people. It doesn’t matter what city or country he’s in, what culture or religion he’s interacting with.

“At best, I can try to capture things that seem to be valid, the way I see them. My pictures are based on identification and presence. I use a small camera and a short lens. I need to be within touching distance to know people and learn something and to know that I exist. It’s sometimes a question of approaching a reality I’m aware of but may be hesitant to learn about. This behavior has many names, one of which is curiosity. It’s most of all about people and the simple fact that we are all related. We are a family. If you have this feeling you will find many doors opening up for you.” 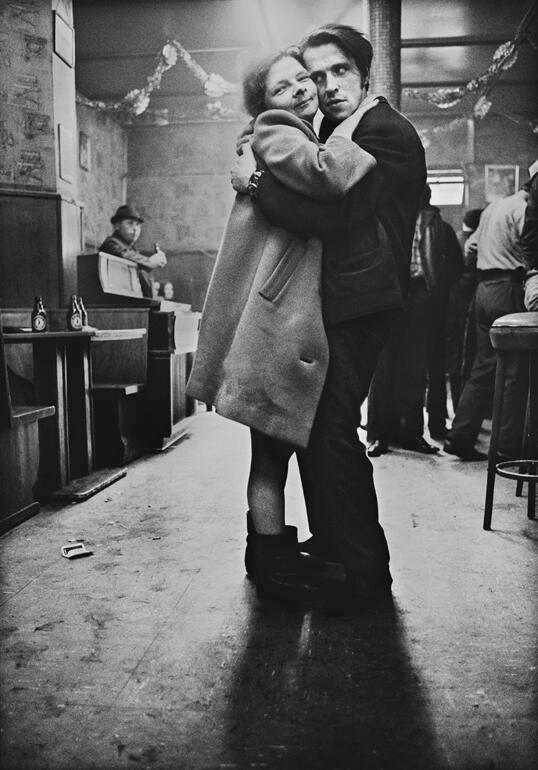