A Journey to Flamenco and Back Again

The U.S. in 1967 was on a roll. It was enjoying the fruits of affluence, yet was headed toward political, cultural and social upheavals that would shake the country to its roots. Spain, on the other hand, was virtually unchanged since Generalissimo Franco crushed the Republicans in the Civil War of 1936-1939 and paralyzed the country under a lid of repressive dictatorship. It remained predominantly the poor agrarian society it had been before the war, suspended between medieval and modern times, as the rest of the western world changed dramatically. There were few cars, only one TV station, intermittent tap water, dubious sanitary conditions and Playboy was confiscated at the border. The arid, rough landscape of Andalusia, dotted with small, fiercely independent pueblos — vestiges of fiefdoms that date back to Roman times — was rich in history and culture, and home to most of the indigenous Gypsy population that had survived the Civil War. In 1967 many of the roads were still dirt tracks. This was the cradle of flamenco, the music of Spain’s Deep South and the expressive voice (cante jondo) of the Gypsy community.

I am a photographer and flamenco guitarist. Until recently I lived in Brooklyn, but I actually grew up in 1950s Los Angeles, attending good schools, reading Beat poets and becoming a blues and jazz enthusiast. Until I went to college, if I identified with any culture at all, it would probably have been America’s car culture.

In May 1967, carrying only a small bag and a guitar case, I stepped off the bus in Morón de la Frontera into a romantic world of narrow cobblestone streets, whitewashed walls, old women in eternal mourning and the smells of pueblo life — hot olive oil and garlic laced with the fragrance of orange blossoms and black tobacco. This small pueblo in the heart of Andalusia, 75 kms southwest of Sevilla, was the antithesis of abrasive, urban, obsessively busy New York City. That was the start of a new life adventure for me. I was 23, wore black pants, beige corduroy jacket, white shirt and tie and sunglasses — no one would have mistaken me for a hippie.

A couple of years earlier I had heard, quite by accident, a private recording of the emotionally raw flamenco of maestro guitarist Diego Amaya Flores del Gastor — an obscure, middle-aged Gypsy who rarely left his adopted home of Morón. Already a student of both classical and flamenco guitar, I had heard most of the commercial recordings of flamenco available in the U.S. at that time, but the experience of hearing Diego’s music was something entirely different. It didn’t just speak to me; it took hold of my soul in a way I could not ignore.

I don’t know why it affected me so strongly. The music was formal, elegant and emotionally profound. It was conversational and inviting. Deeply rooted in the human condition, speaking volumes in a single note, it felt intensely personal yet unpretentiously universal. It was the blues and jazz wrapped in an Indian raga. I had no musical tradition of my own and embraced this as if it were mine.

I took a leave of absence from a New York University doctoral program in physics to find and learn from Diego. I had no idea how the trip would work out. I had no reservations and no plans.

Although I was studying science at the time, and my career choice had been made, my life was about to change: My heart traded everything in for flamenco. The three-month leave became a two-year immersion. I never returned to academic life. The thought of spending the rest of my days as a physicist was no longer very appealing. My experience in Morón had exposed me to flamenco as a creative and emotional way of life, and that changed everything…for the better.

I was not the first foreigner to make the pilgrimage to Diego and Morón de la Frontera, nor the last. The 1960s and 1970s witnessed a small but significant wave of committed and adventurous musicians and dancers traveling far from their homes and cultures around the world to experience flamenco firsthand in the pueblos of Spain’s Deep South. Many not only lived the life and studied the music over periods stretching into years and even decades, but also documented their experience at its source with photographs, audio recordings and film. It was an extraordinary period of cross-cultural exchange made possible by the generosity and openness of many of the great flamenco artists of the 20th Century.

As devoted aficionados we had privileged and unprecedented access to the inner circles of Gypsy life. Not perceived as a political or social threat, passionately supportive of the music, an anomaly in the fabric of the gypsies’ daily life, we became a curious addition to the artists’ world, carving out an unusual place for ourselves in their social sphere. It should also be noted that we provided a mini economy for the artists via paid lessons and fiestas.

When I returned to the States, I dedicated myself to photojournalism and street photography. I had no intention of becoming a professional musician, and I had always been fascinated with making images.

Fast forward to 2003: I was invited to participate in an exhibition accompanying an anthropology conference on flamenco in Granada. The director of the event had seen my images from Spain online. “Sinmysterios de Flamenco” attracted much public attention and brought me back to Andalusia for the first time in 34 years. This was the beginning of the Flamenco Project, a seven-year effort on my part to locate, digitize, restore, archive and publish photographs, audio recordings and films made by non-Spaniards who, like me, had come to Andalusia in pursuit of flamenco during that unique window of opportunity between 1960 and 1985. The project was partly motivated by a need to preserve memories of that time and partly by a personal desire to bring my photography and musical interests together at that point of my life.

I started looking for other non-Spaniards who had been in Morón, hoping to gather material and bear witness to our experiences in that golden period of flamenco. The photographs we took were mostly amateur snaps, like ones taken on vacation of family and friends. Although the photos’ technical quality varied widely, many were possessed of incredible immediacy and deep emotional resonance. Moreover, they reveal the unifying spirit of flamenco, evoked during an era when culture was forged out of shared experience, empathy and creativity.

How can anyone (even non-flamenco fans) fail to be moved by the soulfulness radiating from the charismatic presence of Diego del Gastor in his natural element, playing guitar in a private fiesta, surrounded by friends united in fellowship, cultural tradition and love of the music? William Davidson, who studied guitar in Madrid in 1961, captures the mood of the music and the era with sensitivity and lyricism. Much in a similar vein is photographer and filmmaker Danny Seymour’s dramatic shot of flamenco singer Luis Torres “Joselero,” in which one can read a lifetime of living in his face and the faces of the men and women around him hanging on his every phrase.

Del Gastor’s natural elegance and strength of character is also revealed in a casual shot I took of him in Casa Pepe in 1967. Such down time images are also integral to the Flamenco Project, evoking the underlying texture and ambience in the lives of the musicians and the community in which they lived.

Even more telling perhaps are the numerous photographs of men and women, young and old, spontaneously bursting into song and dance in bars, fiestas, even out in the country, as in the photo (taken by artist, poet and writer David George) of an unidentified gitania dancing on the roadside while other children look on. David also took what is arguably the collection’s most iconic image — the young Gipsy boy dancing in the morning after a fiesta in Feria de Sevilla during that magical year of 1967. The formal perfection of these images is matched by their infectious spirit and almost mystical emanations of grace.

Little by little my network grew, as did the collection of images and stories. During my seven years of research I rescued hundreds of personal photos, digitized the negatives, restored the images and made master pigment prints that brought the era back to life. Finding the people, listening to their stories over cervezas and copitas de fino and sharing their photos has been a fascinating adventure in itself.

Some of the work surfaced in bizarre places, like David George’s steamer trunk full of moldy negatives, paintings and poetry, which had lain untouched for 26 years in a friend’s closet in Zaragoza. Then there was Danny Seymour’s hand-held documentary Flamencología, made in 1970 in Morón: lost for 35 years, it miraculously surfaced in Cuzco, Peru.

Near the end of my research process, I realized that the photos I had collected actually added up to something, with enough coherency of content and expression to merit doing something with this body of work. It was time to present this documentation of the foreign experience of la vida flamenca — and what better place to do it than back where it all started.

In 2003, I met and partnered with Ignacio Gonzáles, Spanish publisher of numerous award-winning fine art photography books and the now defunct literary and photography journal PHOTOVISION. I needed an experienced and flamenco-savvy counterpart in Spain to help realize this project. We set up a digital print studio in his pueblo of Utrera and became great friends. In 2008 the cultural foundation Cajasol | Obra Social agreed to sponsor the project for three years of extraordinary multimedia exhibitions in Spain. Each venue consists of 80 prints, two films and selections from four original audio recordings of fiestas. As of this article six major shows have been mounted and others are planned. In July of 2010, the full 200-page catalog representing the work of 16 photographers was published. Beautifully designed by Roberto Turrégano and printed by Brizzoli in Madrid, it is a poignant collection of 120 tri-tone reproductions and eight bilingual essays — an open window into our experience.

Although that golden age of foreigners studying in Andalusia ended with Diego’s sudden death in 1973 and the great economic and social changes following Franco’s demise in 1975, non-Spaniards still venture to Andalusia, continuing to enjoy the music and to record and photograph emerging artists.

Yet Spanish culture in general has changed so dramatically over the years that the kind of experience we had in the ’60s and ’70s is no longer possible: Better living standards, education, Spain’s rapid technological recovery and advances in communication have unavoidably condemned the flamenco lifestyle to obsolescence. Not only is modern Spain considerably more expensive than before, but the music itself has become commercialized and disconnected from its roots. Moreover, the flow of cultural and musical influence has reversed course: Flamenco has embraced jazz and even hip-hop as major influences, creating new forms of fusion like flamenco nuevo.

As a photographer, I try to preserve fleeting moments of life. As a guitarist, I work to create them. Forty years after my experience in Morón, I have united these passions by assembling a body of work which will perhaps give others a sense of the excitement we felt participating in an artistically unique culture that blossomed in very special circumstances and is now conserved solely in the images, audio recordings and films of those lucky enough to have been there.

Fact File
To learn more about the Flamenco Project, view additional images, contribute written or visual material, or purchase a limited-edition 10-print collector’s portfolio, please visit www.flamencoproject.com. The project is soliciting offers for exhibitions worldwide and is seeking a permanent, institutional home for the collection. 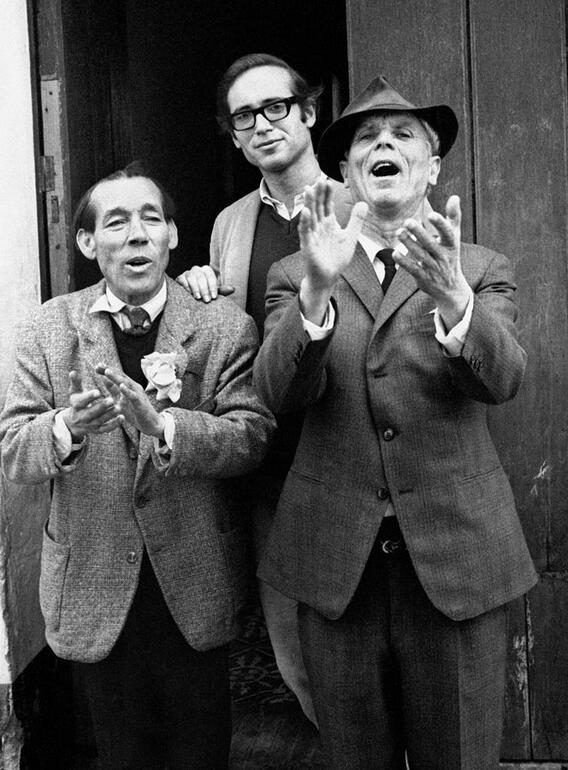